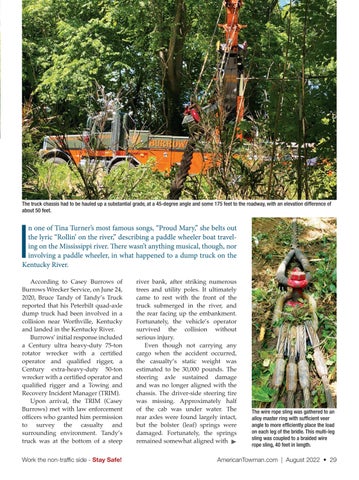 The truck chassis had to be hauled up a substantial grade, at a 45-degree angle and some 175 feet to the roadway, with an elevation difference of about 50 feet.

n one of Tina Turner’s most famous songs, “Proud Mary,” she belts out the lyric “Rollin’ on the river,” describing a paddle wheeler boat traveling on the Mississippi river. There wasn’t anything musical, though, nor involving a paddle wheeler, in what happened to a dump truck on the Kentucky River.

According to Casey Burrows of Burrows Wrecker Service, on June 24, 2020, Bruce Tandy of Tandy’s Truck reported that his Peterbilt quad-axle dump truck had been involved in a collision near Worthville, Kentucky and landed in the Kentucky River. Burrows’ initial response included a Century ultra heavy-duty 75-ton rotator wrecker with a certified operator and qualified rigger, a Century extra-heavy-duty 50-ton wrecker with a certified operator and qualified rigger and a Towing and Recovery Incident Manager (TRIM). Upon arrival, the TRIM (Casey Burrows) met with law enforcement officers who granted him permission to survey the casualty and surrounding environment. Tandy’s truck was at the bottom of a steep Work the non-traffic side - Stay Safe!

river bank, after striking numerous trees and utility poles. It ultimately came to rest with the front of the truck submerged in the river, and the rear facing up the embankment. Fortunately, the vehicle’s operator survived the collision without serious injury. Even though not carrying any cargo when the accident occurred, the casualty’s static weight was estimated to be 30,000 pounds. The steering axle sustained damage and was no longer aligned with the chassis. The driver-side steering tire was missing. Approximately half of the cab was under water. The rear axles were found largely intact, but the bolster (leaf) springs were damaged. Fortunately, the springs remained somewhat aligned with

The wire rope sling was gathered to an alloy master ring with sufficient veer angle to more efficiently place the load on each leg of the bridle. This multi-leg sling was coupled to a braided wire rope sling, 40 feet in length.