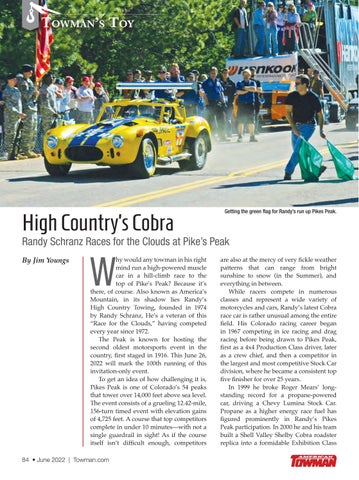 Getting the green flag for Randy’s run up Pikes Peak.

hy would any towman in his right mind run a high-powered muscle car in a hill-climb race to the top of Pike’s Peak? Because it’s there, of course. Also known as America’s Mountain, in its shadow lies Randy’s High Country Towing, founded in 1974 by Randy Schranz, He’s a veteran of this “Race for the Clouds,” having competed every year since 1972. The Peak is known for hosting the second oldest motorsports event in the country, first staged in 1916. This June 26, 2022 will mark the 100th running of this invitation-only event. To get an idea of how challenging it is, Pikes Peak is one of Colorado’s 54 peaks that tower over 14,000 feet above sea level. The event consists of a grueling 12.42-mile, 156-turn timed event with elevation gains of 4,725 feet. A course that top competitors complete in under 10 minutes—with not a single guardrail in sight! As if the course itself isn’t difficult enough, competitors

are also at the mercy of very fickle weather patterns that can range from bright sunshine to snow (in the Summer), and everything in between. While racers compete in numerous classes and represent a wide variety of motorcycles and cars, Randy’s latest Cobra race car is rather unusual among the entire field. His Colorado racing career began in 1967 competing in ice racing and drag racing before being drawn to Pikes Peak, first as a 4x4 Production Class driver, later as a crew chief, and then a competitor in the largest and most competitive Stock Car division, where he became a consistent top five finisher for over 25 years. In 1999 he broke Roger Mears’ longstanding record for a propane-powered car, driving a Chevy Lumina Stock Car. Propane as a higher energy race fuel has figured prominently in Randy’s Pikes Peak participation. In 2000 he and his team built a Shell Valley Shelby Cobra roadster replica into a formidable Exhibition Class