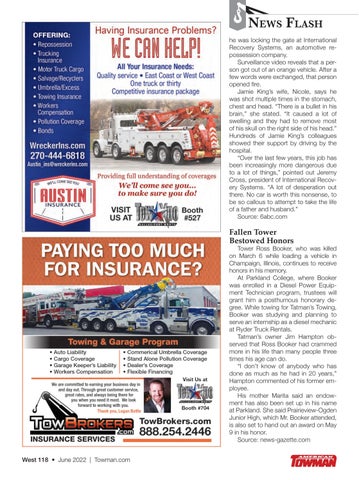 News Flash he was locking the gate at International Recovery Systems, an automotive repossession company. Surveillance video reveals that a person got out of an orange vehicle. After a few words were exchanged, that person opened fire. Jamie King’s wife, Nicole, says he was shot multiple times in the stomach, chest and head. “There is a bullet in his brain,” she stated. “It caused a lot of swelling and they had to remove most of his skull on the right side of his head.” Hundreds of Jamie King’s colleagues showed their support by driving by the hospital. “Over the last few years, this job has been increasingly more dangerous due to a lot of things,” pointed out Jeremy Cross, president of International Recovery Systems. “A lot of desperation out there. No car is worth this nonsense, to be so callous to attempt to take the life of a father and husband.” Source: 6abc.com

Tower Ross Booker, who was killed on March 6 while loading a vehicle in Champaign, Illinois, continues to receive honors in his memory. At Parkland College, where Booker was enrolled in a Diesel Power Equipment Technician program, trustees will grant him a posthumous honorary degree. While towing for Tatman’s Towing, Booker was studying and planning to serve an internship as a diesel mechanic at Ryder Truck Rentals. Tatman’s owner Jim Hampton observed that Ross Booker had crammed more in his life than many people three times his age can do. “I don’t know of anybody who has done as much as he had in 20 years,” Hampton commented of his former employee. His mother Marita said an endowment has also been set up in his name at Parkland. She said Prairieview-Ogden Junior High, which Mr. Booker attended, is also set to hand out an award on May 9 in his honor. Source: news-gazette.com West 118 • June 2022 | Towman.com