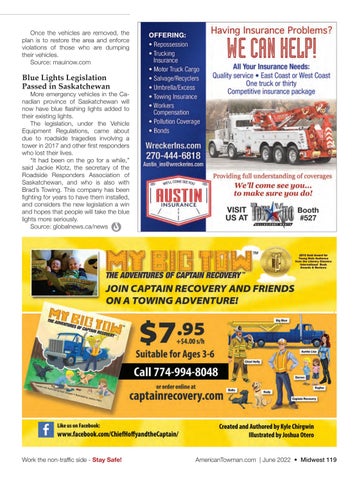 Once the vehicles are removed, the plan is to restore the area and enforce violations of those who are dumping their vehicles. Source: mauinow.com

More emergency vehicles in the Canadian province of Saskatchewan will now have blue flashing lights added to their existing lights. The legislation, under the Vehicle Equipment Regulations, came about due to roadside tragedies involving a tower in 2017 and other first responders who lost their lives. “It had been on the go for a while,” said Jackie Klotz, the secretary of the Roadside Responders Association of Saskatchewan, and who is also with Brad’s Towing. This company has been fighting for years to have them installed, and considers the new legislation a win and hopes that people will take the blue lights more seriously. Source: globalnews.ca/news