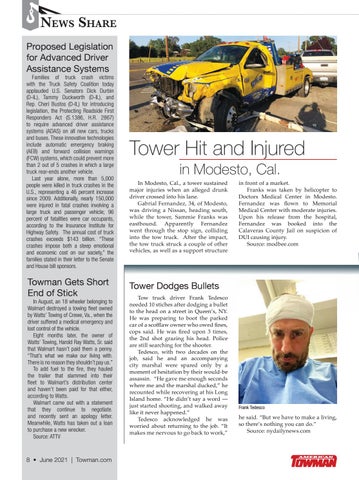 Families of truck crash victims with the Truck Safety Coalition  today applauded U.S. Senators Dick Durbin (D-IL), Tammy Duckworth (D-IL), and Rep. Cheri Bustos (D-IL) for introducing legislation, the Protecting Roadside First Responders Act (S.1386, H.R. 2867) to require advanced driver assistance systems (ADAS) on all new cars, trucks and buses. These innovative technologies include automatic emergency braking (AEB) and forward collision warnings (FCW) systems, which could prevent more than 2 out of 5 crashes in which a large truck rear-ends another vehicle.   Last year alone, more than 5,000 people were killed in truck crashes in the U.S., representing a 46 percent increase since 2009. Additionally, nearly 150,000 were injured in fatal crashes involving a large truck and passenger vehicle; 96 percent of fatalities were car occupants, according to the Insurance Institute for Highway Safety.  The annual cost of truck crashes exceeds $143 billion. “These crashes impose both a steep emotional and economic cost on our society,” the families stated in their letter to the Senate and House bill sponsors.

Towman Gets Short End of Stick

In August, an 18 wheeler belonging to Walmart destroyed a towing fleet owned by Watts’ Towing of Crewe, Va., when the driver suffered a medical emergency and lost control of the vehicle. Eight months later, the owner of Watts’ Towing, Harold Ray Watts, Sr. said that Walmart hasn’t paid them a penny. “That’s what we make our living with. There is no reason they shouldn’t pay us.” To add fuel to the fire, they hauled the trailer that slammed into their fleet to Walmart’s distribution center and haven’t been paid for that either, according to Watts. Walmart came out with a statement that they continue to negotiate. and recently sent an apology letter. Meanwhile, Watts has taken out a loan to purchase a new wrecker. Source: ATTV

In Modesto, Cal., a tower sustained major injuries when an alleged drunk driver crossed into his lane. Gabrial Fernandez, 34, of Modesto, was driving a Nissan, heading south, while the tower, Sammie Franks was eastbound. Apparently Fernandez went through the stop sign, colliding into the tow truck. After the impact, the tow truck struck a couple of other vehicles, as well as a support structure

in front of a market. Franks was taken by helicopter to Doctors Medical Center in Modesto. Fernandez was flown to Memorial Medical Center with moderate injuries. Upon his release from the hospital, Fernandez was booked into the Calaveras County Jail on suspicion of DUI causing injury. Source: modbee.com

Tow truck driver Frank Tedesco needed 10 stiches after dodging a bullet to the head on a street in Queen’s, NY. He was preparing to boot the parked car of a scofflaw owner who owed fines, cops said. He was fired upon 3 times, the 2nd shot grazing his head. Police are still searching for the shooter. Tedesco, with two decades on the job, said he and an accompanying city marshal were spared only by a moment of hesitation by their would-be assassin. “He gave me enough seconds where me and the marshal ducked,” he recounted while recovering at his Long Island home. “He didn’t say a word — just started shooting, and walked away like it never happened.” Tedesco acknowledged he was worried about returning to the job. “It makes me nervous to go back to work,”

he said. “But we have to make a living, so there’s nothing you can do.” Source: nydailynews.com