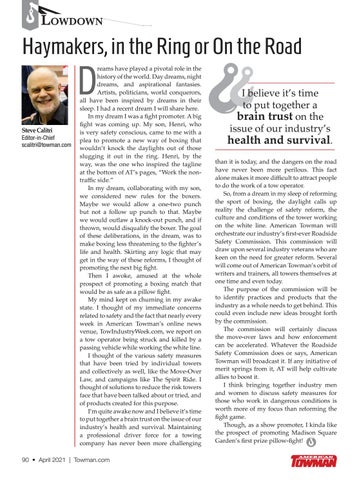 Haymakers, in the Ring or On the Road

reams have played a pivotal role in the history of the world. Day dreams, night dreams, and aspirational fantasies. Artists, politicians, world conquerors, all have been inspired by dreams in their sleep. I had a recent dream I will share here. In my dream I was a fight promoter. A big fight was coming up. My son, Henri, who is very safety conscious, came to me with a plea to promote a new way of boxing that wouldn’t knock the daylights out of those slugging it out in the ring. Henri, by the way, was the one who inspired the tagline at the bottom of AT’s pages, “Work the nontraffic side.” In my dream, collaborating with my son, we considered new rules for the boxers. Maybe we would allow a one-two punch but not a follow up punch to that. Maybe we would outlaw a knock-out punch, and if thrown, would disqualify the boxer. The goal of these deliberations, in the dream, was to make boxing less threatening to the fighter’s life and health. Skirting any logic that may get in the way of these reforms, I thought of promoting the next big fight. Then I awoke, amused at the whole prospect of promoting a boxing match that would be as safe as a pillow fight. My mind kept on churning in my awake state. I thought of my immediate concerns related to safety and the fact that nearly every week in American Towman’s online news venue, TowIndustryWeek.com, we report on a tow operator being struck and killed by a passing vehicle while working the white line. I thought of the various safety measures that have been tried by individual towers and collectively as well, like the Move-Over Law, and campaigns like The Spirit Ride. I thought of solutions to reduce the risk towers face that have been talked about or tried, and of products created for this purpose. I’m quite awake now and I believe it’s time to put together a brain trust on the issue of our industry’s health and survival. Maintaining a professional driver force for a towing company has never been more challenging

I believe it’s time to put together a brain trust on the issue of our industry’s health and survival. than it is today, and the dangers on the road have never been more perilous. This fact alone makes it more difficult to attract people to do the work of a tow operator. So, from a dream in my sleep of reforming the sport of boxing, the daylight calls up reality the challenge of safety reform, the culture and conditions of the tower working on the white line. American Towman will orchestrate our industry’s first-ever Roadside Safety Commission. This commission will draw upon several industry veterans who are keen on the need for greater reform. Several will come out of American Towman’s orbit of writers and trainers, all towers themselves at one time and even today. The purpose of the commission will be to identify practices and products that the industry as a whole needs to get behind. This could even include new ideas brought forth by the commission. The commission will certainly discuss the move-over laws and how enforcement can be accelerated. Whatever the Roadside Safety Commission does or says, American Towman will broadcast it. If any initiative of merit springs from it, AT will help cultivate allies to boost it. I think bringing together industry men and women to discuss safety measures for those who work in dangerous conditions is worth more of my focus than reforming the fight game. Though, as a show promoter, I kinda like the prospect of promoting Madison Square Garden’s first prize pillow-fight!