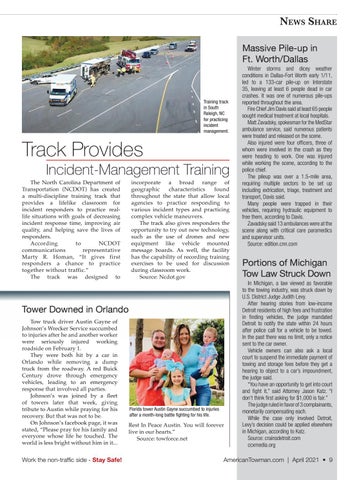 The North Carolina Department of Transportation (NCDOT) has created a multi-discipline training track that provides a lifelike classroom for incident responders to practice reallife situations with goals of decreasing incident response time, improving air quality, and helping save the lives of responders. According to NCDOT communications representative Marty R. Homan, “It gives first responders a chance to practice together without traffic.” The track was designed to

incorporate a broad range of geographic characteristics found throughout the state that allow local agencies to practice responding to various incident types and practicing complex vehicle maneuvers. The track also gives responders the opportunity to try out new technology, such as the use of drones and new equipment like vehicle mounted message boards. As well, the facility has the capability of recording training exercises to be used for discussion during classroom work. Source: Ncdot.gov

Tower Downed in Orlando Tow truck driver Austin Gayne of Johnson’s Wrecker Service succumbed to injuries after he and another worker were seriously injured working roadside on February 1. They were both hit by a car in Orlando while removing a dump truck from the roadway. A red Buick Century drove through emergency vehicles, leading to an emergency response that involved all parties. Johnson’s was joined by a fleet of towers later that week, giving tribute to Austin while praying for his recovery. But that was not to be. On Johnson’s facebook page, it was stated, “Please pray for his family and everyone whose life he touched. The world is less bright without him in it...

Florida tower Austin Gayne succumbed to injuries after a month-long battle fighting for his life.

Rest In Peace Austin. You will forever live in our hearts.” Source: towforce.net

Winter storms and dicey weather conditions in Dallas-Fort Worth early 1/11, led to a 133-car pile-up on Interstate 35, leaving at least 6 people dead in car crashes. It was one of numerous pile-ups reported throughout the area. Fire Chief Jim Davis said at least 65 people sought medical treatment at local hospitals. Matt Zavadsky, spokesman for the MedStar ambulance service, said numerous patients were treated and released on the scene. Also injured were four officers, three of whom were involved in the crash as they were heading to work. One was injured while working the scene, according to the police chief. The pileup was over a 1.5-mile area, requiring multiple sectors to be set up including extrication, triage, treatment and transport, Davis said. Many people were trapped in their vehicles, requiring hydraulic equipment to free them, according to Davis. Zavadsky said 13 ambulances were at the scene along with critical care paramedics and supervisor units. Source: edition.cnn.com

In Michigan, a law viewed as favorable to the towing industry, was struck down by U.S. District Judge Judith Levy. After hearing stories from low-income Detroit residents of high fees and frustration in finding vehicles, the judge mandated Detroit to notify the state within 24 hours after police call for a vehicle to be towed. In the past there was no limit, only a notice sent to the car owner. Vehicle owners can also ask a local court to suspend the immediate payment of towing and storage fees before they get a hearing to object to a car’s impoundment, the judge said. “You have an opportunity to get into court and fight it,” said Attorney Jason Katz. “I don’t think first asking for $1,000 is fair.” The judge ruled in favor of 3 complainants, monetarily compensating each. While the case only involved Detroit, Levy’s decision could be applied elsewhere in Michigan, according to Katz. Source: crainsdetroit.com ccxmedia.org