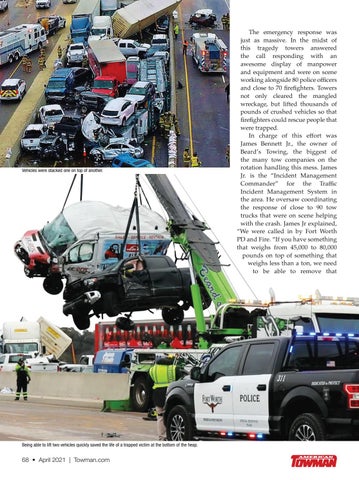 Vehicles were stacked one on top of another.

Being able to lift two vehicles quickly saved the life of a trapped victim at the bottom of the heap.

The emergency response was just as massive. In the midst of this tragedy towers answered the call responding with an awesome display of manpower and equipment and were on scene working alongside 80 police officers and close to 70 firefighters. Towers not only cleared the mangled wreckage, but lifted thousands of pounds of crushed vehicles so that firefighters could rescue people that were trapped. In charge of this effort was James Bennett Jr., the owner of Beard’s Towing, the biggest of the many tow companies on the rotation handling this mess. James Jr. is the “Incident Management Commander” for the Traffic Incident Management System in the area. He oversaw coordinating the response of close to 90 tow trucks that were on scene helping with the crash. James Jr explained, “We were called in by Fort Worth PD and Fire. “If you have something that weighs from 45,000 to 80,000 pounds on top of something that weighs less than a ton, we need to be able to remove that