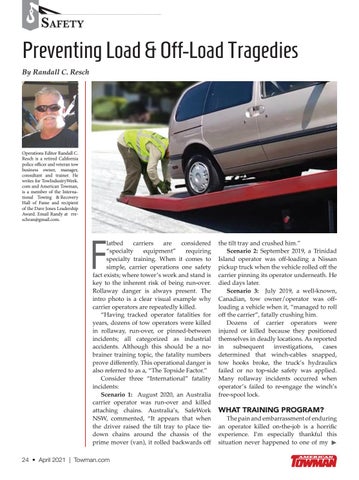 Operations Editor Randall C. Resch is a retired California police officer and veteran tow business owner, manager, consultant and trainer. He writes for TowIndustryWeek. com and American Towman, is a member of the International Towing &  Recovery Hall of Fame and recipient of the Dave Jones Leadership Award. Email Randy at rreschran@gmail.com.

latbed carriers are considered “specialty equipment” requiring specialty training. When it comes to simple, carrier operations one safety fact exists; where tower’s work and stand is key to the inherent risk of being run-over. Rollaway danger is always present. The intro photo is a clear visual example why carrier operators are repeatedly killed. “Having tracked operator fatalities for years, dozens of tow operators were killed in rollaway, run-over, or pinned-between incidents; all categorized as industrial accidents. Although this should be a nobrainer training topic, the fatality numbers prove differently. This operational danger is also referred to as a, “The Topside Factor.” Consider three “International” fatality incidents: Scenario 1: August 2020, an Australia carrier operator was run-over and killed attaching chains. Australia’s, SafeWork NSW, commented, “It appears that when the driver raised the tilt tray to place tiedown chains around the chassis of the prime mover (van), it rolled backwards off

the tilt tray and crushed him.” Scenario 2: September 2019, a Trinidad Island operator was off-loading a Nissan pickup truck when the vehicle rolled off the carrier pinning its operator underneath. He died days later. Scenario 3: July 2019, a well-known, Canadian, tow owner/operator was offloading a vehicle when it, “managed to roll off the carrier”, fatally crushing him. Dozens of carrier operators were injured or killed because they positioned themselves in deadly locations. As reported in subsequent investigations, cases determined that winch-cables snapped, tow hooks broke, the truck’s hydraulics failed or no top-side safety was applied. Many rollaway incidents occurred when operator’s failed to re-engage the winch’s free-spool lock.

The pain and embarrassment of enduring an operator killed on-the-job is a horrific experience. I’m especially thankful this situation never happened to one of my