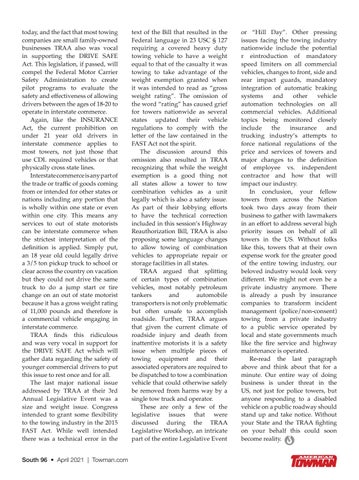 today, and the fact that most towing companies are small family-owned businesses TRAA also was vocal in supporting the DRIVE SAFE Act. This legislation, if passed, will compel the Federal Motor Carrier Safety Administration to create pilot programs to evaluate the safety and effectiveness of allowing drivers between the ages of 18-20 to operate in interstate commerce. Again, like the INSURANCE Act, the current prohibition on under 21 year old drivers in interstate commerce applies to most towers, not just those that use CDL required vehicles or that physically cross state lines. Interstate commerce is any part of the trade or traffic of goods coming from or intended for other states or nations including any portion that is wholly within one state or even within one city. This means any services to out of state motorists can be interstate commerce when the strictest interpretation of the definition is applied. Simply put, an 18 year old could legally drive a 3/5 ton pickup truck to school or clear across the country on vacation but they could not drive the same truck to do a jump start or tire change on an out of state motorist because it has a gross weight rating of 11,000 pounds and therefore is a commercial vehicle engaging in interstate commerce. TRAA finds this ridiculous and was very vocal in support for the DRIVE SAFE Act which will gather data regarding the safety of younger commercial drivers to put this issue to rest once and for all. The last major national issue addressed by TRAA at their 3rd Annual Legislative Event was a size and weight issue. Congress intended to grant some flexibility to the towing industry in the 2015 FAST Act. While well intended there was a technical error in the South 96 • April 2021 | Towman.com

text of the Bill that resulted in the Federal language in 23 USC § 127 requiring a covered heavy duty towing vehicle to have a weight equal to that of the casualty it was towing to take advantage of the weight exemption granted when it was intended to read as “gross weight rating”. The omission of the word “rating” has caused grief for towers nationwide as several states updated their vehicle regulations to comply with the letter of the law contained in the FAST Act not the spirit. The discussion around this omission also resulted in TRAA recognizing that while the weight exemption is a good thing not all states allow a tower to tow combination vehicles as a unit legally which is also a safety issue. As part of their lobbying efforts to have the technical correction included in this session’s Highway Reauthorization Bill, TRAA is also proposing some language changes to allow towing of combination vehicles to appropriate repair or storage facilities in all states. TRAA argued that splitting of certain types of combination vehicles, most notably petroleum tankers and automobile transporters is not only problematic but often unsafe to accomplish roadside. Further, TRAA argues that given the current climate of roadside injury and death from inattentive motorists it is a safety issue when multiple pieces of towing equipment and their associated operators are required to be dispatched to tow a combination vehicle that could otherwise safely be removed from harms way by a single tow truck and operator. These are only a few of the legislative issues that were discussed during the TRAA Legislative Workshop, an intricate part of the entire Legislative Event

or “Hill Day”. Other pressing issues facing the towing industry nationwide include the potential r eintroduction of mandatory speed limiters on all commercial vehicles, changes to front, side and rear impact guards, mandatory integration of automatic braking systems and other vehicle automation technologies on all commercial vehicles. Additional topics being monitored closely include the insurance and trucking industry’s attempts to force national regulations of the price and services of towers and major changes to the definition of employee vs. independent contractor and how that will impact our industry. In conclusion, your fellow towers from across the Nation took two days away from their business to gather with lawmakers in an effort to address several high priority issues on behalf of all towers in the US. Without folks like this, towers that at their own expense work for the greater good of the entire towing industry, our beloved industry would look very different. We might not even be a private industry anymore. There is already a push by insurance companies to transform incident management (police/non-consent) towing from a private industry to a public service operated by local and state governments much like the fire service and highway maintenance is operated. Re-read the last paragraph above and think about that for a minute. Our entire way of doing business is under threat in the US, not just for police towers, but anyone responding to a disabled vehicle on a public roadway should stand up and take notice. Without your State and the TRAA fighting on your behalf this could soon become reality.