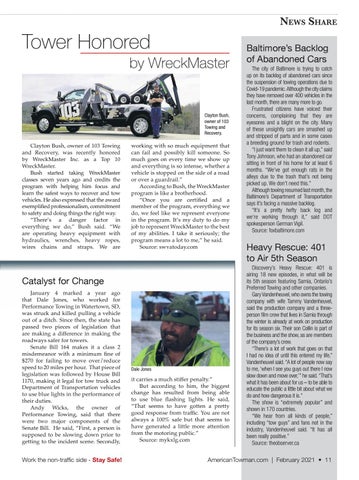 Clayton Bush, owner of 103 Towing and Recovery, was recently honored by WreckMaster Inc. as a Top 10 WreckMaster. Bush started taking WreckMaster classes seven years ago and credits the program with helping him focus and learn the safest ways to recover and tow vehicles. He also expressed that the award exemplified professionalism, commitment to safety and doing things the right way. “There’s a danger factor in everything we do,” Bush said. “We are operating heavy equipment with hydraulics, wrenches, heavy ropes, wires chains and straps. We are

working with so much equipment that can fail and possibly kill someone. So much goes on every time we show up and everything is so intense, whether a vehicle is stopped on the side of a road or over a guardrail.” According to Bush, the WreckMaster program is like a brotherhood. “Once you are certified and a member of the program, everything we do, we feel like we represent everyone in the program. It’s my duty to do my job to represent WreckMaster to the best of my abilities. I take it seriously; the program means a lot to me,” he said. Source: swvatoday.com

January 4 marked a year ago that Dale Jones, who worked for Performance Towing in Watertown, SD, was struck and killed pulling a vehicle out of a ditch. Since then, the state has passed two pieces of legislation that are making a difference in making the roadways safer for towers. Senate Bill 164 makes it a class 2 misdemeanor with a minimum fine of $270 for failing to move over/reduce speed to 20 miles per hour. That piece of legislation was followed by House Bill 1170, making it legal for tow truck and Department of Transportation vehicles to use blue lights in the performance of their duties. Andy Wicks, the owner of Performance Towing, said that there were two major components of the Senate Bill. He said, “First, a person is supposed to be slowing down prior to getting to the incident scene. Secondly,

it carries a much stiffer penalty.” But according to him, the biggest change has resulted from being able to use blue flashing lights. He said, “That seems to have gotten a pretty good response from traffic. You are not always a 100% safe but that seems to have generated a little more attention from the motoring public.” Source: mykxlg.com

The city of Baltimore is trying to catch up on its backlog of abandoned cars since the suspension of towing operations due to Covid-19 pandemic. Although the city claims they have removed over 400 vehicles in the last month, there are many more to go. Frustrated citizens have voiced their concerns, complaining that they are eyesores and a blight on the city. Many of these unsightly cars are smashed up and stripped of parts and in some cases a breeding ground for trash and rodents. “I just want them to clean it all up,” said Tony Johnson, who had an abandoned car sitting in front of his home for at least 6 months. “We’ve got enough rats in the alleys due to the trash that’s not being picked up. We don’t need this.” Although towing resumed last month, the Baltimore’s Department of Transportation says it’s facing a massive backlog. “It’s a pretty hefty back log and we’re working through it,” said DOT spokesperson German Vigil. Source: foxbaltimore.com

Discovery’s Heavy Rescue: 401 is airing 18 new episodes, in what will be its 5th season featuring Sarnia, Ontario’s Preferred Towing and other companies. Gary Vandenheuvel, who owns the towing company with wife Tammy Vandenheuvel, said the production company and a threeperson film crew that lives in Sarnia through the winter is already at work on production for its season six. Their son Collin is part of the business and the show, as are members of the company’s crew. “There’s a lot of work that goes on that I had no idea of until this entered my life,” Vandenheuvel said. “A lot of people now say to me, ‘when I see you guys out there I now slow down and move over,’” he said. “That’s what it has been about for us – to be able to educate the public a little bit about what we do and how dangerous it is.” The show is “extremely popular” and shown in 170 countries. “We hear from all kinds of people,” including “tow guys” and fans not in the industry, Vandenheuvel said. “It has all been really positive.” Source: theobserver.ca