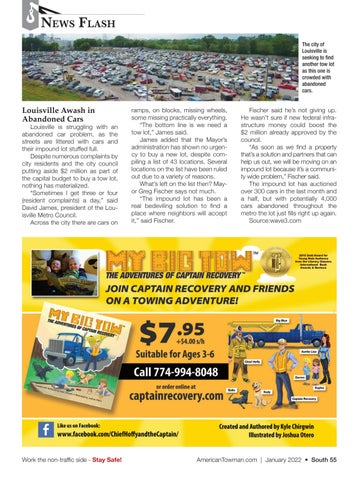 News Flash The city of Louisville is seeking to find another tow lot as this one is crowded with abandoned cars.

Louisville is struggling with an abandoned car problem, as the streets are littered with cars and their impound lot stuffed full. Despite numerous complaints by city residents and the city council putting aside $2 million as part of the capital budget to buy a tow lot, nothing has materialized. “Sometimes I get three or four (resident complaints) a day,” said David James, president of the Louisville Metro Council. Across the city there are cars on

ramps, on blocks, missing wheels, some missing practically everything. “The bottom line is we need a tow lot,” James said. James added that the Mayor’s administration has shown no urgency to buy a new lot, despite compiling a list of 43 locations. Several locations on the list have been ruled out due to a variety of reasons. What’s left on the list then? Mayor Greg Fischer says not much. “The impound lot has been a real bedeviling solution to find a place where neighbors will accept it,” said Fischer.

Fischer said he’s not giving up. He wasn’t sure if new federal infrastructure money could boost the $2 million already approved by the council. “As soon as we find a property that’s a solution and partners that can help us out, we will be moving on an impound lot because it’s a community wide problem,” Fischer said. The impound lot has auctioned over 300 cars in the last month and a half, but with potentially 4,000 cars abandoned throughout the metro the lot just fills right up again. Source:wave3.com