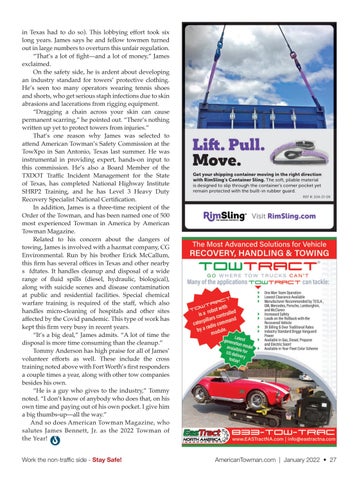 in Texas had to do so). This lobbying effort took six long years. James says he and fellow towmen turned out in large numbers to overturn this unfair regulation. “That’s a lot of fight—and a lot of money,” James exclaimed. On the safety side, he is ardent about developing an industry standard for towers’ protective clothing. He’s seen too many operators wearing tennis shoes and shorts, who get serious staph infections due to skin abrasions and lacerations from rigging equipment. “Dragging a chain across your skin can cause permanent scarring,” he pointed out. “There’s nothing written up yet to protect towers from injuries.” That’s one reason why James was selected to attend American Towman’s Safety Commission at the TowXpo in San Antonio, Texas last summer. He was instrumental in providing expert, hands-on input to this commission. He’s also a Board Member of the TXDOT Traffic Incident Management for the State of Texas, has completed National Highway Institute SHRP2 Training, and he has Level 3 Heavy Duty Recovery Specialist National Certification. In addition, James is a three-time recipient of the Order of the Towman, and has been named one of 500 most experienced Towman in America by American Towman Magazine. Related to his concern about the dangers of towing, James is involved with a hazmat company, CG Environmental. Run by his brother Erick McCallum, this firm has several offices in Texas and other nearby s fdtates. It handles cleanup and disposal of a wide range of fluid spills (diesel, hydraulic, biological), along with suicide scenes and disease contamination at public and residential facilities. Special chemical warfare training is required of the staff, which also handles micro-cleaning of hospitals and other sites affected by the Covid pandemic. This type of work has kept this firm very busy in recent years. “It’s a big deal,” James admits. “A lot of time the disposal is more time consuming than the cleanup.” Tommy Anderson has high praise for all of James’ volunteer efforts as well. These include the cross training noted above with Fort Worth’s first responders a couple times a year, along with other tow companies besides his own. “He is a guy who gives to the industry,” Tommy noted. “I don’t know of anybody who does that, on his own time and paying out of his own pocket. I give him a big thumbs-up—all the way.” And so does American Towman Magazine, who salutes James Bennett, Jr. as the 2022 Towman of the Year! Work the non-traffic side - Stay Safe!