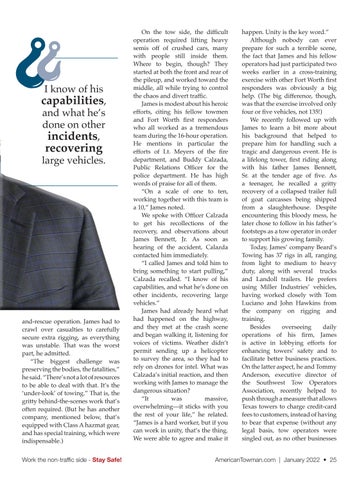 I know of his

capabilities, and what he’s done on other incidents,

and-rescue operation. James had to crawl over casualties to carefully secure extra rigging, as everything was unstable. That was the worst part, he admitted. “The biggest challenge was preserving the bodies, the fatalities,” he said. “There’s not a lot of resources to be able to deal with that. It’s the ‘under-look’ of towing.” That is, the gritty behind-the-scenes work that’s often required. (But he has another company, mentioned below, that’s equipped with Class A hazmat gear, and has special training, which were indispensable.) Work the non-traffic side - Stay Safe!

On the tow side, the difficult operation required lifting heavy semis off of crushed cars, many with people still inside them. Where to begin, though? They started at both the front and rear of the pileup, and worked toward the middle, all while trying to control the chaos and divert traffic. James is modest about his heroic efforts, citing his fellow towmen and Fort Worth first responders who all worked as a tremendous team during the 16-hour operation. He mentions in particular the efforts of Lt. Meyers of the fire department, and Buddy Calzada, Public Relations Officer for the police department. He has high words of praise for all of them. “On a scale of one to ten, working together with this team is a 10,” James noted. We spoke with Officer Calzada to get his recollections of the recovery, and observations about James Bennett, Jr. As soon as hearing of the accident, Calazda contacted him immediately. “I called James and told him to bring something to start pulling,” Calzada recalled. “I know of his capabilities, and what he’s done on other incidents, recovering large vehicles.” James had already heard what had happened on the highway, and they met at the crash scene and began walking it, listening for voices of victims. Weather didn’t permit sending up a helicopter to survey the area, so they had to rely on drones for intel. What was Calzada’s initial reaction, and then working with James to manage the dangerous situation? “It was massive, overwhelming—it sticks with you the rest of your life,” he related. “James is a hard worker, but if you can work in unity, that’s the thing. We were able to agree and make it

happen. Unity is the key word.” Although nobody can ever prepare for such a terrible scene, the fact that James and his fellow operators had just participated two weeks earlier in a cross-training exercise with other Fort Worth first responders was obviously a big help. (The big difference, though, was that the exercise involved only four or five vehicles, not 135!) We recently followed up with James to learn a bit more about his background that helped to prepare him for handling such a tragic and dangerous event. He is a lifelong tower, first riding along with his father James Bennett, Sr. at the tender age of five. As a teenager, he recalled a gritty recovery of a collapsed trailer full of goat carcasses being shipped from a slaughterhouse. Despite encountering this bloody mess, he later chose to follow in his father’s footsteps as a tow operator in order to support his growing family. Today, James’ company Beard’s Towing has 37 rigs in all, ranging from light to medium to heavy duty, along with several trucks and Landoll trailers. He prefers using Miller Industries’ vehicles, having worked closely with Tom Luciano and John Hawkins from the company on rigging and training. Besides overseeing daily operations of his firm, James is active in lobbying efforts for enhancing towers’ safety and to facilitate better business practices. On the latter aspect, he and Tommy Anderson, executive director of the Southwest Tow Operators Association, recently helped to push through a measure that allows Texas towers to charge credit-card fees to customers, instead of having to bear that expense (without any legal basis, tow operators were singled out, as no other businesses