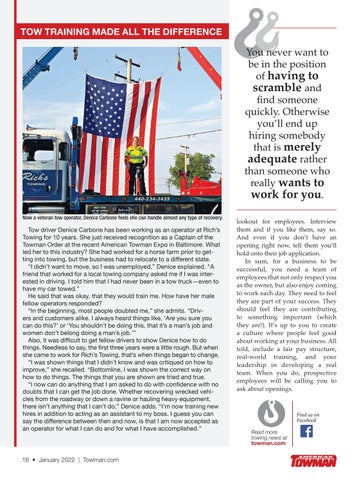 TOW TRAINING MADE ALL THE DIFFERENCE

You never want to be in the position of having to scramble and find someone quickly. Otherwise you’ll end up hiring somebody that is merely adequate rather than someone who really wants to work for you. Now a veteran tow operator, Denice Carbone feels she can handle almost any type of recovery.

Tow driver Denice Carbone has been working as an operator at Rich’s Towing for 10 years. She just received recognition as a Captain of the Towman Order at the recent American Towman Expo in Baltimore. What led her to this industry? She had worked for a horse farm prior to getting into towing, but the business had to relocate to a different state. “I didn’t want to move, so I was unemployed,” Denice explained. “A friend that worked for a local towing company asked me if I was interested in driving. I told him that I had never been in a tow truck—even to have my car towed.” He said that was okay, that they would train me. How have her male fellow operators responded? “In the beginning, most people doubted me,” she admits. “Drivers and customers alike. I always heard things like, ‘Are you sure you can do this?’ or ‘You shouldn’t be doing this, that it’s a man’s job and women don’t belong doing a man’s job.’” Also, it was difficult to get fellow drivers to show Denice how to do things. Needless to say, the first three years were a little rough. But when she came to work for Rich’s Towing, that’s when things began to change. “I was shown things that I didn’t know and was critiqued on how to improve,” she recalled. “Bottomline, I was shown the correct way on how to do things. The things that you are shown are tried and true. “I now can do anything that I am asked to do with confidence with no doubts that I can get the job done. Whether recovering wrecked vehicles from the roadway or down a ravine or hauling heavy equipment, there isn’t anything that I can’t do,” Denice adds. “I’m now training new hires in addition to acting as an assistant to my boss. I guess you can say the difference between then and now, is that I am now accepted as an operator for what I can do and for what I have accomplished.”

lookout for employees. Interview them and if you like them, say so. And even if you don’t have an opening right now, tell them you’ll hold onto their job application. In sum, for a business to be successful, you need a team of employees that not only respect you as the owner, but also enjoy coming to work each day. They need to feel they are part of your success. They should feel they are contributing to something important (which they are!). It’s up to you to create a culture where people feel good about working at your business. All told, include a fair pay structure, real-world training, and your leadership in developing a real team. When you do, prospective employees will be calling you to ask about openings.