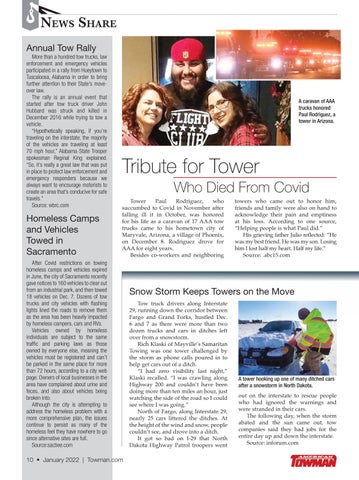 More than a hundred tow trucks, law enforcement and emergency vehicles participated in a rally from Hueytown to Tuscaloosa, Alabama in order to bring further attention to their State’s moveover law. The rally is an annual event that started after tow truck driver John Hubbard was struck and killed in December 2016 while trying to tow a vehicle. “Hypothetically speaking, if you’re traveling on the interstate, the majority of the vehicles are traveling at least 70 mph hour,” Alabama State Trooper spokesman Reginal King explained. “So, it’s really a great law that was put in place to protect law enforcement and emergency responders because we always want to encourage motorists to create an area that’s conducive for safe travels.” Source: wbrc.com

Homeless Camps and Vehicles Towed in Sacramento After Covid restrictions on towing homeless camps and vehicles expired in June, the city of Sacramento recently gave notices to 160 vehicles to clear out from an industrial park, and then towed 18 vehicles on Dec. 7. Dozens of tow trucks and city vehicles with flashing lights lined the roads to remove them as the area has been heavily impacted by homeless campers, cars and RVs. Vehicles owned by homeless individuals are subject to the same traffic and parking laws as those owned by everyone else, meaning the vehicles must be registered and can’t be parked in the same place for more than 72 hours, according to a city web page. Owners of local businesses in the area have complained about urine and feces, and also about vehicles being broken into. Although the city is attempting to address the homeless problem with a more comprehensive plan, the issues continue to persist as many of the homeless feel they have nowhere to go since alternative sites are full. Source:sacbee.com

A caravan of AAA trucks honored Paul Rodriguez, a tower in Arizona.

Who Died From Covid

Tower Paul Rodriguez, who succumbed to Covid in November after falling ill it in October, was honored for his life as a caravan of 17 AAA tow trucks came to his hometown city of Maryvale, Arizona, a village of Phoenix, on December 8. Rodriguez drove for AAA for eight years. Besides co-workers and neighboring

towers who came out to honor him, friends and family were also on hand to acknowledge their pain and emptiness at his loss. According to one source, “Helping people is what Paul did.” His grieving father Julio reflected: “He was my best friend. He was my son. Losing him I lost half my heart. Half my life.” Source: .abc15.com

Snow Storm Keeps Towers on the Move Tow truck drivers along Interstate 29, running down the corridor between Fargo and Grand Forks, hustled Dec. 6 and 7 as there were more than two dozen trucks and cars in ditches left over from a snowstorm. Rich Klaski of Mayville’s Samaritan Towing was one tower challenged by the storm as phone calls poured in to help get cars out of a ditch. “I had zero visibility last night,” Klaski recalled. “I was crawling along Highway 200 and couldn’t have been doing more than ten miles an hour, just watching the side of the road so I could see where I was going.” North of Fargo, along Interstate 29, nearly 25 cars littered the ditches. At the height of the wind and snow, people couldn’t see, and drove into a ditch. It got so bad on I-29 that North Dakota Highway Patrol troopers went

A tower hooking up one of many ditched cars after a snowstorm in North Dakota. out on the interstate to rescue people who had ignored the warnings and were stranded in their cars. The following day, when the storm abated and the sun came out, tow companies said they had jobs for the entire day up and down the interstate. Source: inforum.com