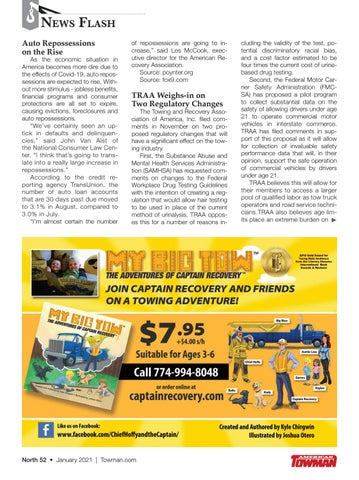 As the economic situation in America becomes more dire due to the effects of Covid-19, auto repossessions are expected to rise. Without more stimulus - jobless benefits, financial programs and consumer protections are all set to expire, causing evictions, foreclosures and auto repossessions. “We’ve certainly seen an uptick in defaults and delinquencies,” said John Van Alst of the National Consumer Law Center. “I think that’s going to translate into a really large increase in repossessions.” According to the credit reporting agency TransUnion, the number of auto loan accounts that are 30 days past due moved to 3.1% in August, compared to 3.0% in July. “I’m almost certain the number

The Towing and Recovery Association of America, Inc. filed comments in November on two proposed regulatory changes that will have a significant effect on the towing industry. First, the Substance Abuse and Mental Health Services Administration (SAMHSA) has requested comments on changes to the Federal Workplace Drug Testing Guidelines with the intention of creating a regulation that would allow hair testing to be used in place of the current method of urinalysis. TRAA opposes this for a number of reasons in-

cluding the validity of the test, potential discriminatory racial bias, and a cost factor estimated to be four times the current cost of urinebased drug testing. Second, the Federal Motor Carrier Safety Administration (FMCSA) has proposed a pilot program to collect substantial data on the safety of allowing drivers under age 21 to operate commercial motor vehicles in interstate commerce. TRAA has filed comments in support of this proposal as it will allow for collection of invaluable safety performance data that will, in their opinion, support the safe operation of commercial vehicles by drivers under age 21. TRAA believes this will allow for their members to access a larger pool of qualified labor as tow truck operators and road service technicians.TRAA also believes age limits place an extreme burden on