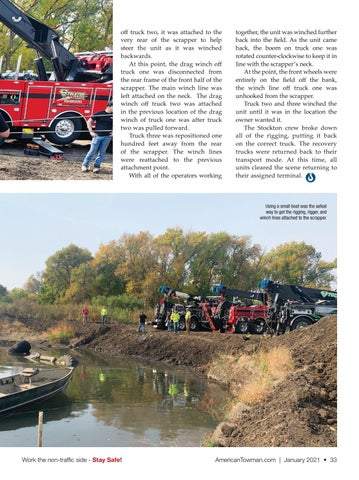 together, the unit was winched further back into the field. As the unit came back, the boom on truck one was rotated counter-clockwise to keep it in line with the scrapperâ&#x20AC;&#x2122;s neck. At the point, the front wheels were entirely on the field off the bank, the winch line off truck one was unhooked from the scrapper. Truck two and three winched the unit until it was in the location the owner wanted it. The Stockton crew broke down all of the rigging, putting it back on the correct truck. The recovery trucks were returned back to their transport mode. At this time, all units cleared the scene returning to their assigned terminal.

Using a small boat was the safest way to get the rigging, rigger, and winch lines attached to the scrapper.