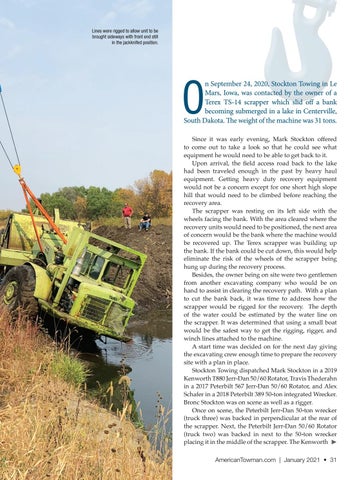 Lines were rigged to allow unit to be brought sideways with front end still in the jackknifed position.

n September 24, 2020, Stockton Towing in Le Mars, Iowa, was contacted by the owner of a Terex TS-14 scrapper which slid off a bank becoming submerged in a lake in Centerville, South Dakota. The weight of the machine was 31 tons. Since it was early evening, Mark Stockton offered to come out to take a look so that he could see what equipment he would need to be able to get back to it. Upon arrival, the field access road back to the lake had been traveled enough in the past by heavy haul equipment. Getting heavy duty recovery equipment would not be a concern except for one short high slope hill that would need to be climbed before reaching the recovery area. The scrapper was resting on its left side with the wheels facing the bank. With the area cleared where the recovery units would need to be positioned, the next area of concern would be the bank where the machine would be recovered up. The Terex scrapper was building up the bank. If the bank could be cut down, this would help eliminate the risk of the wheels of the scrapper being hung up during the recovery process. Besides, the owner being on site were two gentlemen from another excavating company who would be on hand to assist in clearing the recovery path. With a plan to cut the bank back, it was time to address how the scrapper would be rigged for the recovery. The depth of the water could be estimated by the water line on the scrapper. It was determined that using a small boat would be the safest way to get the rigging, rigger, and winch lines attached to the machine. A start time was decided on for the next day giving the excavating crew enough time to prepare the recovery site with a plan in place. Stockton Towing dispatched Mark Stockton in a 2019 Kenworth T880 Jerr-Dan 50/60 Rotator, Travis Thederahn in a 2017 Peterbilt 567 Jerr-Dan 50/60 Rotator, and Alex Schafer in a 2018 Peterbilt 389 50-ton integrated Wrecker. Bronc Stockton was on scene as well as a rigger. Once on scene, the Peterbilt Jerr-Dan 50-ton wrecker (truck three) was backed in perpendicular at the rear of the scrapper. Next, the Peterbilt Jerr-Dan 50/60 Rotator (truck two) was backed in next to the 50-ton wrecker placing it in the middle of the scrapper. The Kenworth