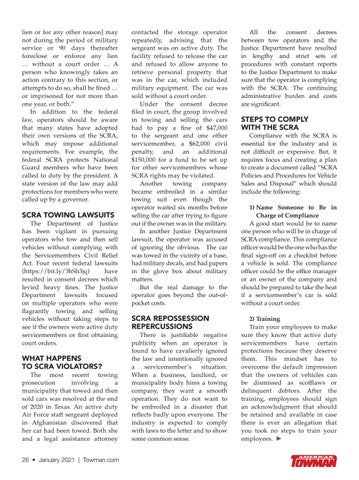 lien or for any other reason] may not during the period of military service or 90 days thereafter foreclose or enforce any lien … without a court order … A person who knowingly takes an action contrary to this section, or attempts to do so, shall be fined … or imprisoned for not more than one year, or both.” In addition to the federal law, operators should be aware that many states have adopted their own versions of the SCRA, which may impose additional requirements. For example, the federal SCRA protects National Guard members who have been called to duty by the president. A state version of the law may add protections for members who were called up by a governor.

The Department of Justice has been vigilant in pursuing operators who tow and then sell vehicles without complying with the Servicemembers Civil Relief Act. Four recent federal lawsuits (https://bit.ly/3hSh3jq) have resulted in consent decrees which levied heavy fines. The Justice Department lawsuits focused on multiple operators who were flagrantly towing and selling vehicles without taking steps to see if the owners were active duty servicemembers or first obtaining court orders.

WHAT HAPPENS TO SCRA VIOLATORS?

The most recent towing prosecution involving a municipality that towed and then sold cars was resolved at the end of 2020 in Texas. An active duty Air Force staff sergeant deployed in Afghanistan discovered that her car had been towed. Both she and a legal assistance attorney 26 • January 2021 | Towman.com

contacted the storage operator repeatedly, advising that the sergeant was on active duty. The facility refused to release the car and refused to allow anyone to retrieve personal property that was in the car, which included military equipment. The car was sold without a court order. Under the consent decree filed in court, the group involved in towing and selling the cars had to pay a fine of $47,000 to the sergeant and one other servicemember, a $62,000 civil penalty, and an additional $150,000 for a fund to be set up for other servicemembers whose SCRA rights may be violated. Another towing company became embroiled in a similar towing suit even though the operator waited six months before selling the car after trying to figure out if the owner was in the military. In another Justice Department lawsuit, the operator was accused of ignoring the obvious. The car was towed in the vicinity of a base, had military decals, and had papers in the glove box about military matters. But the real damage to the operator goes beyond the out-ofpocket costs.

2) Training Train your employees to make sure they know that active duty servicemembers have certain protections because they deserve them. This mindset has to overcome the default impression that the owners of vehicles can be dismissed as scofflaws or delinquent debtors. After the training, employees should sign an acknowledgment that should be retained and available in case there is ever an allegation that you took no steps to train your employees.

There is justifiable negative publicity when an operator is found to have cavalierly ignored the law and intentionally ignored a servicemember’s situation. When a business, landlord, or municipality body hires a towing company, they want a smooth operation. They do not want to be embroiled in a disaster that reflects badly upon everyone. The industry is expected to comply with laws to the letter and to show some common sense.

STEPS TO COMPLY WITH THE SCRA

Compliance with the SCRA is essential for the industry and is not difficult or expensive. But, it requires focus and creating a plan to create a document called “SCRA Policies and Procedures for Vehicle Sales and Disposal” which should include the following: 1)  Name Someone to Be in Charge of Compliance A good start would be to name one person who will be in charge of SCRA compliance. This compliance officer would be the one who has the final sign-off on a checklist before a vehicle is sold. The compliance officer could be the office manager or an owner of the company and should be prepared to take the heat if a servicemember’s car is sold without a court order.