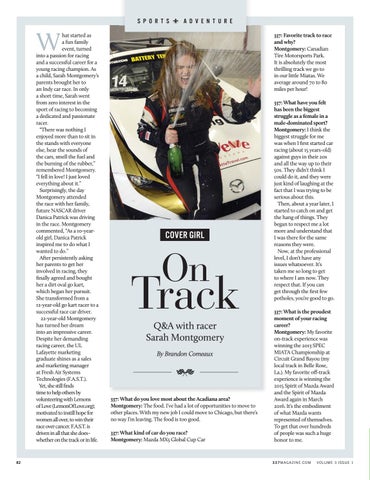 hat started as a fun family event, turned into a passion for racing and a successful career for a young racing champion. As a child, Sarah Montgomery’s parents brought her to an Indy car race. In only a short time, Sarah went from zero interest in the sport of racing to becoming a dedicated and passionate racer. “There was nothing I enjoyed more than to sit in the stands with everyone else, hear the sounds of the cars, smell the fuel and the burning of the rubber,” remembered Montgomery. “I fell in love! I just loved everything about it.” Surprisingly, the day Montgomery attended the race with her family, future NASCAR driver Danica Patrick was driving in the race. Montgomery commented, “As a 10-yearold girl, Danica Patrick inspired me to do what I wanted to do.” After persistently asking her parents to get her involved in racing, they ﬁnally agreed and bought her a dirt oval go kart, which began her pursuit. She transformed from a 12-year-old go kart racer to a successful race car driver. 22-year-old Montgomery has turned her dream into an impressive career. Despite her demanding racing career, the UL Lafayette marketing graduate shines as a sales and marketing manager at Fresh Air Systems Technologies (F.A.S.T.). Yet, she still ﬁnds time to help others by volunteering with Lemons of Love (LemonOfLove.org); motivated to instill hope for women all over, to win their race over cancer. F.A.S.T. is driven in all that she does– whether on the track or in life.

337: Favorite track to race and why? Montgomery: Canadian Tire Motorsports Park. It is absolutely the most thrilling track we go to in our little Miatas. We average around 70 to 80 miles per hour!

337: What do you love most about the Acadiana area? Montgomery: The food. I’ve had a lot of opportunities to move to other places. With my new job I could move to Chicago, but there’s no way I’m leaving. The food is too good. 337: What kind of car do you race? Montgomery: Mazda MX5 Global Cup Car

337: What have you felt has been the biggest struggle as a female in a male-dominated sport? Montgomery: I think the biggest struggle for me was when I ﬁrst started car racing (about 15 years-old) against guys in their 20s and all the way up to their 50s. They didn’t think I could do it, and they were just kind of laughing at the fact that I was trying to be serious about this. Then, about a year later, I started to catch on and get the hang of things. They began to respect me a lot more and understand that I was there for the same reasons they were. Now, at the professional level, I don’t have any issues whatsoever. It’s taken me so long to get to where I am now. They respect that. If you can get through the ﬁrst few potholes, you’re good to go. 337: What is the proudest moment of your racing career? Montgomery: My favorite on-track experience was winning the 2013 SPEC MIATA Championship at Circuit Grand Bayou (my local track in Belle Rose, La.). My favorite oﬀ-track experience is winning the 2015 Spirit of Mazda Award and the Spirit of Mazda Award again in March 2016. It’s the embodiment of what Mazda wants represented of themselves. To get that over hundreds of people was such a huge honor to me.