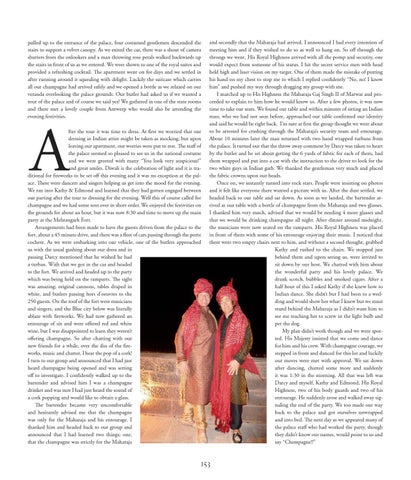 pulled up to the entrance of the palace, four costumed gentlemen descended the stairs to support a velvet canopy. As we exited the car, there was a shout of camera shutters from the onlookers and a man throwing rose petals walked backwards up the stairs in front of us as we entered. We were shown to one of the royal suites and provided a refreshing cocktail. The apartment went on for days and we settled in after running around it squealing with delight. Luckily the suitcase which carries all our champagne had arrived safely and we opened a bottle as we relaxed on our veranda overlooking the palace grounds. Our butler had asked us if we wanted a tour of the palace and of course we said yes! We gathered in one of the state rooms and there met a lovely couple from Antwerp who would also be attending the evening festivities.

fter the tour it was time to dress. At first we worried that our dressing in Indian attire might be taken as mocking, but upon leaving our apartment, our worries were put to rest. The staff of the palace seemed so pleased to see us in the national costume and we were greeted with many “You look very auspicious!” and great smiles. Diwali is the celebration of light and it is traditional for fireworks to be set off this evening and it was no exception at the palace. There were dancers and singers helping us get into the mood for the evening. We ran into Kathy & Edmond and learned that they had gotten engaged between our parting after the tour to dressing for the evening. Well this of course called for champagne and we had some sent over in short order. We enjoyed the festivities on the grounds for about an hour, but it was now 8:30 and time to move up the main party at the Mehrangarh Fort. Arrangements had been made to have the guests driven from the palace to the fort, about a 45 minute drive, and there was a fleet of cars passing through the porte cochere. As we were embarking into our vehicle, one of the butlers approached us with the usual gushing about our dress and in passing Darcy mentioned that he wished he had a turban. With that we got in the car and headed to the fort. We arrived and headed up to the party which was being held on the ramparts. The sight was amazing; original cannons, tables draped in white, and butlers passing hors d’oeuvres to the 250 guests. On the roof of the fort were musicians and singers, and the Blue city below was literally ablaze with fireworks. We had now gathered an entourage of six and were offered red and white wine, but I was disappointed to learn they weren’t offering champagne. So after chatting with our new friends for a while, over the din of the fireworks, music and chatter, I hear the pop of a cork! I turn to our group and announced that I had just heard champagne being opened and was setting off to investigate. I confidently walked up to the bartender and advised him I was a champagne drinker and was sure I had just heard the sound of a cork popping and would like to obtain a glass. The bartender became very uncomfortable and hesitantly advised me that the champagne was only for the Maharaja and his entourage. I thanked him and headed back to our group and announced that I had learned two things; one, that the champagne was strictly for the Maharaja

and secondly that the Maharaja had arrived. I announced I had every intention of meeting him and if they wished to do so as well to hang on. So off through the throngs we went. His Royal Highness arrived with all the pomp and security, one would expect from someone of his status. I hit the secret service men with head held high and laser vision on my target. One of them made the mistake of putting his hand on my chest to stop me to which I replied confidently “No, no! I know him” and pushed my way through dragging my group with me. I marched up to His Highness the Maharaja Gaj Singh II of Marwar and proceeded to explain to him how he would know us. After a few photos, it was now time to take our seats. We found our table and within minutes of sitting an Indian man, who we had not seen before, approached our table confirmed our identity and said he would be right back. I’m sure at first the group thought we were about to be arrested for crashing through the Maharaja’s security team and entourage. About 10 minutes later the man returned with two hand wrapped turbans from the palace. It turned out that the throw away comment by Darcy was taken to heart by the butler and he set about getting the 6 yards of fabric for each of them, had them wrapped and put into a car with the instruction to the driver to look for the two white guys in Indian garb. We thanked the gentleman very much and placed the fabric crowns upon our heads. Once on, we instantly turned into rock stars. People were insisting on photos and it felt like everyone there wanted a picture with us. After the dust settled, we headed back to our table and sat down. As soon as we landed, the bartender arrived at our table with a bottle of champagne from the Maharaja and two glasses. I thanked him very much, advised that we would be needing 4 more glasses and that we would be drinking champagne all night. After dinner around midnight, the musicians were now seated on the ramparts. His Royal Highness was placed in front of them with some of his entourage enjoying their music. I noticed that there were two empty chairs next to him, and without a second thought, grabbed Kathy and rushed to the chairs. We stopped just behind them and upon seeing us, were invited to sit down by our host. We chatted with him about the wonderful party and his lovely palace. We drank scotch, bubbles and smoked cigars. After a half hour of this I asked Kathy if she knew how to Indian dance. She didn’t but I had been to a wedding and would show her what I knew but we must stand behind the Maharaja as I didn’t want him to see me teaching her to screw in the light bulb and pet the dog. My plan didn’t work though and we were spotted. His Majesty insisted that we come and dance for him and his crew. With champagne courage, we stepped in front and danced for this lot and luckily our moves were met with approval. We sat down after dancing, chatted some more and suddenly it was 1:30 in the morning. All that was left was Darcy and myself, Kathy and Edmond, His Royal Highness, two of his body guards and two of his entourage. He suddenly arose and walked away signaling the end of the party. We too made our way back to the palace and got ourselves unwrapped and into bed. The next day as we appeared many of the palace staff who had worked the party, though they didn’t know our names, would point to us and say “Champagne!!”