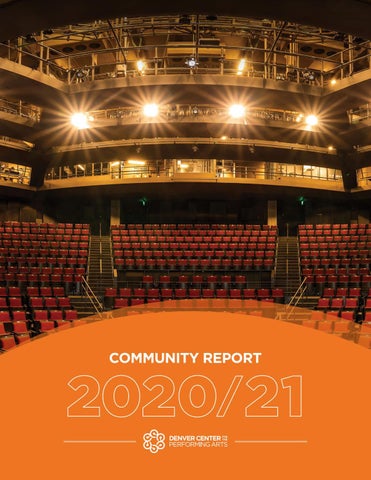 RESILIENT AND RECOMMITTED On June 29, 2021 — one day before the end of our last fiscal year — we announced the return of theatre to our stages. It was a moment of celebration, relief and recommitment. COVID-19 forced venues to close on March 13, 2020, which led to the cancellation of more than 40 shows, dozens of events and hundreds of classes. Over the course of 16 months, which spanned the entirety of fiscal year 2021, the Denver Center for the Performing Arts (DCPA) lost an estimated $100 million in revenue, furloughed 130 team members and laid off 37 individuals. While at times the future looked bleak, we were fortunate to have unprecedented support from local officials, state and federal grants, and our beloved patrons, donors and community. A traditional Community Report is intended to encapsulate a year’s accomplishments, but this year, we want to acknowledge those entities and individuals who contributed in a variety of ways to our very survival. First and foremost, we wish to express our deep gratitude to our staff, artists, volunteers and Board of Trustees who made many timely, difficult decisions, yet remained hopeful and resilient during such unprecedented times of uncertainty. Additionally, Congress led its first-ever legislative effort to ensure federal funding for the arts. With the passage of the Shuttered Venue Operators Grant, the DCPA received $10 million, as well as the $4 million in forgivable loans through the Paycheck Protection Program, which allowed us to plan for our rebound and recovery. Most importantly, to protect the health and well-being of our staff, artists and audiences, we continue to work in partnership with Arts &amp; Venues and City officials to adapt and implement public health orders and policies to support our re-opening. While we experienced a prolonged intermission from live, indoor theatre, renovation of the Bonfils Theatre Complex was completed in time for our reopening. The project with Semple Brown Design and Turner Construction was made possible by the continued support of our Grander Opening capital campaign. In summary, thanks to federal funding, SCFD and the generosity of our donors, we were able to extend health insurance to furloughed team members; transform our education programs into virtual experiences for 41,000 students; convert our Seawell Ballroom into an HD broadcast facility for clients to reach both local and global audiences, pivot to a wholly online work environment, and provide digital performances to more than 126,000 theatre patrons. Day by day, we are building momentum to support our recovery. We now have the resources to embark on a 30-show season that will allow the DCPA to reconnect with our community, renew our commitment to arts and education, and return — resilient and recommitted — to once again engage and inspire through the transformative power of live theatre.

On with the show!

Once again, DCPA collaborated on the annual DPS Shakespeare Festival.

MISSION We engage and inspire through the transformative power of live theatre.

Hassan Salem, DCPA Trustee and Head of Commercial Banking for U.S. Bank, was named Chair-elect of the DCPA. He will succeed Martin Semple as Chair in July 2022.

The newly renovated mid-level lobby within the Bonfils Theatre Complex.

free and discounted admissions The community contributed $4.4MM toward the DCPA’s Recovery Fund and another $2.7MM toward the Grander Opening capital campaign. Thank you!

This year, more than any other, contributions enabled the DCPA not only to survive but thrive. Thank you! IN-KIND DONATIONS

*Contributions are reported gross and may include

19 ticketed events The world premiere of Wild Fire was in development during FY21.

In the 2019/20 season, Off-Center produced Camp Christmas in collaboration with Hanzon Studios as well as The Whiskey Tasting, directed by Amanda Berg-Wilson, Artistic Director of The Catamounts. During the pandemic, these partners re-envisioned the events as at-home immersive experiences produced in association with Off-Center. Bold, risky and rewarding... engaging more than 66,000 individuals collectively.

When Until the Flood was cancelled, the Theatre Company was undeterred. Nine national companies joined to produce an online version viewed by nearly 8,000 people.

EDUCATION IMPACT A summary of acting classes and school programs

The DCPA’s annual AT&amp;T High School Playwriting Workshops &amp; Competition took a step in a new direction this year when it expanded to middle schools. Following free playwriting workshops for more than 2,700 students, 129 scripts were submitted into the competition. After a professional review, three middle school and three high school plays received top honors. To cap off the program, the three winning high school plays were read in front of a virtual audience.

Despite a two-year hiatus of Theatre for Young Audiences, the Genesee Mountain Foundation continued its support, laying the groundwork for a return of the program in 2023.

Theatre for Young Audiences returns in 2023.

To be or not to be? There was no question. Students participating in the 37th annual Denver Public Schools Shakespeare Festival would not be sidelined by plague, pestilence or pandemic. Instead, DCPA Education leveraged the newly acquired HD broadcast capabilities in the Seawell Ballroom so that students could present soliloquies, sonnets and scenes from Shakespeare. After 77 preparatory workshops, more than 500 students performed in this annual showcase of the best of the Bard.

39,774 guests at virtual and in-person events

The Event Services team transformed the Seawell Ballroom into an HD broadcast facility.

The move to a virtual format was a boon for the DCPA’s nonprofit and community events clients — allowing nonprofits to still raise valuable funds and connect with their audience, even in a year where guests couldn’t gather in-person.

What do you do if you’re a party venue with no party? Pivot...quickly. Such was the case for the Seawell Ballroom events team. Recognizing an emerging need among corporate, non-profit and community partners, DCPA Event Services leveraged its extraordinary lighting and AV capabilities with highspeed broadband access to expand its business model for both the short and long term. Now, global audiences can participate in local events to expand reach, connectivity and profitability.

A HYBRID SATURDAY NIGHT ALIVE Between social distancing, capacity limits and mask mandates, it was nearly impossible to plan the DCPA’s much anticipated Saturday Night Alive gala. Ultimately, a hybrid model was the key. To minimize the crowd size, the Development and Event Services teams utilized two venues with staggered start times and broadcast the entertainment live from the Ballroom. As the first public event in more than a year, Saturday Night Alive welcomed 300 in-person and 500 virtual guests and netted more than $573,000 for theatre and education programming. 11

A summary of work in our state-of-the-art facilities

When the Bonfils Theatre Complex opened in 1979, it was touted as the Crown Jewel of the Rockies. Now, a sevenyear, $54MM renovation has restored its former glory and advanced the theatrical capabilities by decades. A partnership between DCPA, Semple Brown Design and Turner Construction, the renovation encompassed three theatres, backstage and support areas, and the central lobby. Thanks in large part to the Better Denver and Elevate Denver bond funds; 100% participation by the Board of Trustees; signature gifts from Marvin &amp; Judi Wolf, Dorota &amp; Kevin Kilstrom, Robert &amp; Judi Newman, and Dean Singleton, and gifts from individuals, corporations and foundations, the spaces can now fully accommodate artists’ imaginations, inspire students’ creativity and welcome guests to stories of a lifetime.

The DCPA worked in partnership with the City of Denver’s division of Arts &amp; Venues to improve the air quality in all theatres and classrooms. This included a combination of increased fresh air circulation, air filtration cleaning, and installation of new filters, air scrubbing devices and bi-polar ionization to clean airborne pollutants. These measures, along with rigorous cleaning, restriction of food and beverage to designated areas, and implementation of a vaccination and mask policy are all intended to reduce exposure to COVID to provide a healthy and safe theatre going experience.

A summary of our partnerships

guests at events in which the DCPA participated

AUDIENCES ENCOURAGED TO GET INTO “GOOD TROUBLE” Presidential Medal of Freedom honoree and former Congressman John Lewis (D-GA) was an activist who believed that getting into “good trouble” was necessary to achieve racial equality. The DCPA joined more than 60 of the nation’s cultural institutions in presenting John Lewis: Good Trouble, a documentary about his life and work followed by a virtual conversation of his legacy. In addition to making this opportunity available to the local community, DCPA Education &amp; Community Engagement hosted an in-person screening of the documentary for cultural and community leaders.

As the country grappled with racial injustice and American theatre was urged to be more inclusive by artists of color, the DCPA published an Equity Statement and identified five areas of focus to improve inclusivity.

* The DCPA received $10 million from the Shuttered Venue Operators Grant and $4 million in forgivable loans through the Paycheck Protection Program. These funds allowed us to cover operating costs, rehire staff and rebound for the future. 16

Total revenue, gains, and other support

Total revenue, gains, and other support

Despite allocating its philanthropic budget to front line resources, TransAmerica reallocated money to support our High School Playwriting program, which symbolizes the future of theatre. 21

Whether you recognized the Denver Center in your estate plans or made a gift to recognize important individuals with whom you share a love of theatre, we thank you for choosing the DCPA as a recipient of your generosity. Your gift to the DCPA will ensure that theatre continues to engage and inspire new audiences for generations to come. Thank you.

In 2019, the DCPA launched a monthly giving program whereby donors can make a sustained investment in the organization. Nearly 200 individuals gave more than $52,000 collectively in FY21.

Special thanks to the citizens of the Scientific &amp; Cultural Facilities District for their ongoing support.

The Denver Center for the Performing Arts (DCPA) is one of the largest non-profit theatre organizations in the nation, presenting Broadway tours and producing its own theatre, cabaret, musicals, and innovative, multimedia plays. 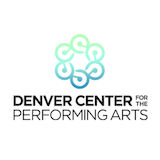 Denver Center for the Performing Arts

More from Denver Center for the Performing Arts