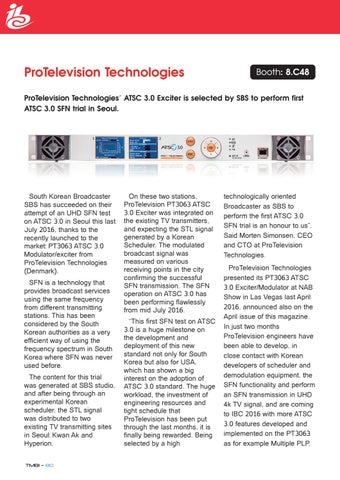 South Korean Broadcaster SBS has succeeded on their attempt of an UHD SFN test on ATSC 3.0 in Seoul this last July 2016, thanks to the recently launched to the market: PT3063 ATSC 3.0 Modulator/exciter from ProTelevision Technologies (Denmark). SFN is a technology that provides broadcast services using the same frequency from different transmitting stations. This has been considered by the South Korean authorities as a very efficient way of using the frequency spectrum in South Korea where SFN was never used before. The content for this trial was generated at SBS studio, and after being through an experimental Korean scheduler, the STL signal was distributed to two existing TV transmitting sites in Seoul: Kwan Ak and Hyperion. TMBi - 80

On these two stations, ProTelevision PT3063 ATSC 3.0 Exciter was integrated on the existing TV transmitters, and expecting the STL signal generated by a Korean Scheduler. The modulated broadcast signal was measured on various receiving points in the city confirming the successful SFN transmission. The SFN operation on ATSC 3.0 has been performing flawlessly from mid July 2016. “This first SFN test on ATSC 3.0 is a huge milestone on the development and deployment of this new standard not only for South Korea but also for USA, which has shown a big interest on the adoption of ATSC 3.0 standard. The huge workload, the investment of engineering resources and tight schedule that ProTelevision has been put through the last months, it is finally being rewarded. Being selected by a high

technologically oriented Broadcaster as SBS to perform the first ATSC 3.0 SFN trial is an honour to us”. Said Morten Simonsen, CEO and CTO at ProTelevision Technologies. ProTelevision Technologies presented its PT3063 ATSC 3.0 Exciter/Modulator at NAB Show in Las Vegas last April 2016, announced also on the April issue of this magazine. In just two months ProTelevision engineers have been able to develop, in close contact with Korean developers of scheduler and demodulation equipment, the SFN functionality and perform an SFN transmission in UHD 4k TV signal, and are coming to IBC 2016 with more ATSC 3.0 features developed and implemented on the PT3063 as for example Multiple PLP.