Daniel moreira - The king from Papatua (for Ensemble and Baritone) 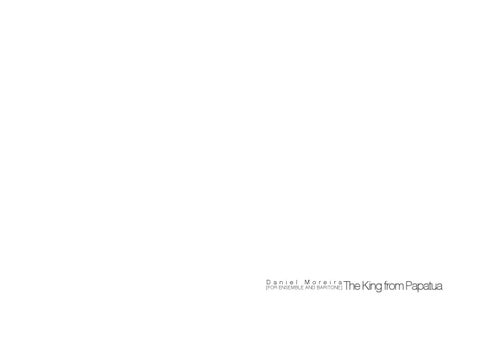 [FOR ENSEMBLE AND BARITONE]

Bass Drum [played with very soft mallets], Big Ratchet* Big pencil made of Polystyrene* (to be used on a cardboard), SuSu* (small piece of bamboo to be put on the palat to produce a high-pitched “cat” effect) - Metal Bowl* (to be given to the conductor at the end of the piece) - Objects attached/disposed to/on a table: o Small Ratchet* , o Price Tagger* , o Hotel Desk Bell* , o 6 Stripes of Gaffer Tape* (to be pulled), o A Spray with audible sound* . Violin (also: metal practice mute, 1 stripe of Gaffer Tape*)

(also: a bunch of coins (about 5 or 6) to be thrown on the metallic bowl of the singer at the end of the piece)

* These instruments/objects can be obtained from the composer. S U G G E S TE D D IS P O S ITIO N

Microtones - Arrows on the accidentals mean quartertone deviations on the note.

A crescendo sign opened at the end means an explosive/exponential crescendo”. Grow only a little at the beginning and exaggerate at the end. Save the “Energy” of the crescendo for the very last moment.

Voice - Speak the indicated words very fast (but not in a mechanical way!). The pronunciation is very free. Repeat the words as many times as needed for the duration of the wavy line.

Trills and tremolos should be played as fast and dense as possible.

descending scale on the flute simultaneously with the change in the oral cavity. Jet Whistle.

Pitch bends are always done with the embouchure i.e turning the flute. To achieve a greater effect, begin the note with the flute already turned to the opposite direction.

Aeolian Sound – Diamond-shaped notes mean an impure sound, where the air noise is stronger than the tone.

Additional Instruments: Slide-Whistle - Even though a different range of slide-whistle can be used. The used

Strong attack on the note creating a complex, overtone-rich

notation is as following:

Vowel Change. Blow air inside the flute with the hole completely covered. Slowly change the vowel in your oral cavity from “I” to “o”. The result is a descending air sound. To reinforce this effect it is advisable to do a

Air sound. To produce air sounds on the slide-whistle, partially close the hole with the finger.

Small Gong – should be played with a very soft mallet. immediately after striking. Notation:

Subtone – Diamond-shaped notes mean an impure, dark, soft sound, where the air noise is stronger than the tone. (Hear the playing of e.g. Ben Webster in “Danny Boy”).

Open Slaps – should always be performed very percussive and explosive.

Ordinary Slaps – Not so aggressive as the open slaps and with perceivable pitch.

Tape Multiphonic 1 – any aggressive multiphonic of your choice.

Multiphonic 2 – should consist of the written-pitches D4 and F4.

Growl – distort the sound with the throat (sometimes can be done using the voice while playing).

– Before the performance, attach the 2 stripes of gaffers tape to a surface (e.g. the music stand). When indicated, quickly remove the stripes creating a percussive effect.

Melodica – A Melodica ranging from F3 to F6 (3 octaves) should be used. The Melodica is written as it sounds.

Harmon Mute ON during the entire piece

Indicates a fast, single opening of the mute resulting in one “wah” effect.

“Tiger Effect” – with almost no lip pressure: as trying to play an extreme low, unreachable note. The result is a very low, pitchless air sound with perceivable vibrations. Similar to the roar of a tiger… or of a lion.

Open and close the mute very fast resulting in a “wahu” effect.

Air Sound - Blow only air inside the trombone. Open/Close - Indicate respectively the “opened“ and “closed” positions of the mute. A line after the symbol indicates the duration of the mute, as well as the transition between the two positions.

Mute Tremolo - repeatedly open and close the mute very fast for the whole duration of the note. The result should be multiples “wah-wah-wahs” similar to a laugh.

Move the slide freely around the written note. Do not exceed the range of a major second above and below the written pitch. Give preference to small microtonal intervals.

Slap Tongue. Strong attack on the mouthpiece with the tongue.

Additional Instrument: Tape – Before the performance, attach 1 stripe of gaffers tape to a surface (e.g. the music stand). When indicated, quickly remove the stripes creating a percussive effect.

Knitting Needle a long, thin Knitting Needle (European size: 2,5mm / U.S. size 1) to be scratched or to be bounced on a surface (e.g. a music stand). A line connecting the notes represents a movement from tip to butt and viceversa.

Mallet scratch scratch a stick on a surface (e.g. music stand) from tip to butt and vice versa. Upward/downward glissandi should sound.

Kazoo sing a short, descending, staccato line on the kazoo. Pitches are free. Car Horn a small car horn that sounds when its rubber ball is pressed.

Polystyrene scratch a small piece of polystyrene on a resonant surface (e.g. Timpano)

Flexatone bow the flexatone and slowly change its pitch by pressing/depressing it. The line indicates approximately the pitch movement.

Metal rod a very long, thin, flexible metal rod should be placed on top of a resonant surface (e.g. a metal cooking pan). Press it firmly with the thumb and let part of the rod bounce outside the surface. Slowly pull the rod while still firmly pressing it. A glissando effect should sound. The line indicates the pulling movement.

These and other more traditional techniques are also briefly described on the score.

“Magic Tisch” consists of a small, thin, flexible metal rod attached to a wooden surface. When the piece of rod is plucked there is a similar sound to a school ruler bouncing on a table. The sound can also be achieved with the long metal rod (in this case, leave a small part of the rod outside a surface and bounce it). A long school ruler can also be used. Whoopee Cushion is normally used to imitate fart sounds. Leave it on the floor and play it with the foot. A large cushion is preferred.

Timpano: Superball: rub the superball on the timpano surface. A very low and continuous sound should result (as a &quot;big fat animal&quot;). „Vibraslap“: hold part of the stick firmly on the timpano&#39;s border and and bounce it like a vibraslap. Jazz Brush: scrape the surface of the timpano with a jazz brush

SCORDATURA: The score should be played normally as if the strings were not detuned. The sounding pitches may therefore differ from the written ones.

STRING IV: as low as possible (c. 1 octave), so that it starts to bounce against the fingerboard, when played forte.

Low Finger Pressure. Play the note lightly touching the string (as if playing an harmonic).

Artificial and natural harmonics are written as a combination of the fundamental tone (round note-head) and the place to lightly touch the string (diamond-shaped note).

Highest-note possible on the written string.

Ultra-high pitches. Play with the left finger between the end of the fingerboard and the bridge. Notes ad lib.

Excessive Bow Pressure on the indicated string resulting in a &quot;cracking&quot; sound without definite pitch. (Damp the string with the left hand to avoid resonances).

Ricochet combined with a descending glissando of the left hand.

Scratch the Bow across the strings from bridge to fingerboard and vice-versa with much bow pressure.

Parlando. Fast random notes up and down the indicated string. Use very little finger pressure (as playing harmonics) and extreme Sul Ponticello. The results are very fast metallic sounds as if somebody talking through an old radio.

Additional Instruments: Tape – Before the performance, attach the stripes of gaffers tape to a surface (e.g. the music stand). When indicated, quickly remove the stripes creating a percussive effect.

Polystirene (Cello) – Two small pieces of polystyrene should be rubbed in circular motion against each other. Accents can be produced by briefly rubbing quicker.

Col Legno Gettato - Throw the wood of the bow on strings II and III. High ascending “clicks” should sound.

The text consists exclusively of invented words. The piece is freely based on the concept of a character who suddenly begins to speak an imaginary language that is not understood by his peers. There is however no fixed literary storyline guiding the dramaturgy of the piece.

The writing and therefore the pronunciation of the words were conceived based on the phonetics of the Portuguese Language (for assistance on this topic, see: http://www.youtube.com/watch?v=7_3ECC8ZPP4 or http://www.omniglot.com/writing/portuguese.htm). However, it is highly desired that each performer develop his own pronunciation of the text and acquire fluency to it. TIP: It is advisable to use an existing recording of the piece as guidance for learning the score. An audio and a video recording can be sent upon request at: www.daniel-moreira.com

Instructions on the intentions and expression are written in italic in the score. These instructions aim specially at the inflections of the voice and somewhat at the gestures of the performer. An over-theatrical, operatic performance of the piece should be avoided.

The singer occupies three positions during the piece: Beginning to BAR 24: AUDIENCE: Singer is already sitting in the audience before the piece starts. BAR 30 to BAR 186: STATION 1: only a music stand (if necessary) BAR 187 to END STATION 2: A bass drum, a small table including the smaller percussion instruments/objects and a music stand. This station can be build on top of a small platform to facilitate the visibility of the singer and his instruments.

On the last part of the piece, the performer is asked to play percussion instruments and daily objects. Except for the bass drum, all objects should be placed on a small table:

BASS DRUM - Should be played with very soft mallets.

RATCHET - Two Ratchets with different sizes are required (Large and small). The large Ratchet should be fixed on the table with a gaffer tape. The small Ratchet can be played with both hands.

be used to write on a writing board. If this object is not available, a large wooden pencil can also be used.

to be pulled during the piece.

SPRAY - A spray â&amp;#x20AC;&amp;#x201C; similar to those used on cleaning products - filled with water.

Daniel moreira - The king from Papatua (for Ensemble and Baritone) 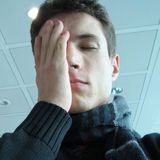