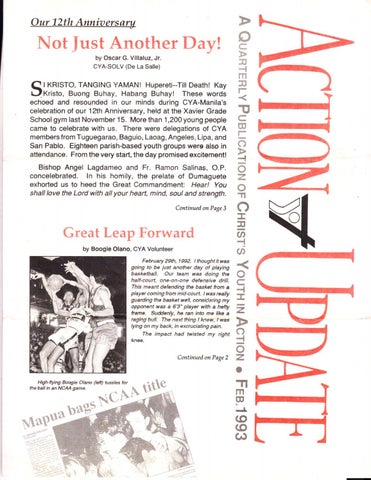 Bishop Angel Lagdameo and Fr. Ramon Salinag, O.P. concelebrated. ln his homily, the prelate of .Bumaguete exhorted us to heed the Great Commandment: Hear! You shall love the Lord with allyour heart, mind, soul and strength. Continueil onPage 3

Great Leap Forward by Boogle Olano, CYA Volunteer February 29th, 1992. lthought itwas going to be just another day of playing basketball. Our team was doing the half-court, one-on-one defensive drill. This meant defending the basket from a player coming from mid-court. lwas really guarding the basket well, corci*sring my opponent was a 6'3" player with a hefty frame. Su&enly, he ran into me like a raging bull. The next thing I knew, I was lying on my back, in exuuciating pain.

The impact had twisted my right knee.

majored in Accounting; Jennifer, in Psychology) they decided to volunteer a year's service in CYA-Manila. Both will be working in the UPMAT area.

TWO ''IMPORTED'' VOLUNTEERS CYA-Manila is blessed with two new volunteers who came from 'University Christian Outreach", a youth movement in the United States with which CYA has a close relationship.

in various events geared toward evangelizing their schoolrnates. Highlight

Jerry is assigned to the University of the Philippines, Jennifer to Miriam College

was a prayer rally in which staffer Jon

who were used to political rallies, were

Jerry Cooper and Jennifer Rivard have been actively involved with the

UCO chapter at Michigan State University. After their graduation (Jerry

'a new kind of

Our CYA group at the Don Bosco

ln addition to those

acknowledged in our Anniversary Souvenir Program, the lollowing

donors also contributed to our recently concluded Fundrive'92. We are using

brations, and a prayer rally. The dean,

this space to acknowledge their

A week later, another Christ Awareness Week was held at the

Great Leap Forward . . . from page 1 Then the basketball accident

Mapua lnstitute of Technology with an

happened, and things began to change. What I tl.ought was a minor sprain lurned out to be a serious injury. After

Engineering degree. lhad played with lhe Varsity Team, and during mY last year ln school our team won the 1990

NCAA Championship. At that time

massive steroids, my knee was still as bad as before. The doctors discovered

dEcided to pursue a basketball career in thE commercial league.

Up until that time I had alwaYs considered myself to be a rather well-balancad person. MY school grades wsre okay, I had no vicas, and many friends. I was able to graduate on

an athletic scholarship, and even helped win the trophy lor my school. By all indications, I was on top of the worldl

But in fac't, something seemed to

be missing. Was it God? I went to Mass mechanically; I was there

physically, but not mentallY. MY relationship with my family was not good. I was conetantly bickering with my brothers and sisters, and would do favors for my par€nts grudginglY.

some lorn ligaments, and told me

I learned how to listen to what He has to say. I did not reckon that the Lord would

had just graduated lrom the

For a basketball PlaYer, a knee injury is almost like the end of the world. At least, it means the end of a dream in the professional basketball league. However, it was during that time that I began to deepen my relationship with the Lord, I realized that lwas so caught up with mysell that ldidn't have time for God. Now I had lots ol time,

began to r€sp€ct my parents more and to serve them gladly. My brothers and sisters were amazed at the changes they saw in me, and we began to have great times together. I still enjoy playing basketball. But now I realize that lwas making the sport my number one priority in life. My knee injury became a way for God lo break

know that in everyihing God works for good for those who love Him, who are called according to His purpose.' I can tru{hfully say I am now hapPier and

and God was there. He draw mY attention away from mysell and mY

more fulfilled. lf there is one thing I regret, it's thai I didn'l take my laith

srnall world, and showed me how much better He was. I came to know Him

personally. I was seeking God sincerely in prayer and in reading

celebration. About 120 of them came, and we took time to honor and thank them for

their sacrifice, love and support.

Bo Sanchez, publisher ol Kerygma magazine and noted Catholicspeaker, gave the first talk. He stressed that discipleship had a cost: Like St. Paul, the servant of God was not just a slave; he or she became a "hupereti", the Greek word for one who has lost all personal rights, who has only one purpose (to love God) and who lullills that to the death. Mike Joseph, Jr., former CYA Director, led the afternoon session with a powerful talk entitled simply "All". Based on Matthew 28:18-20, Mike exhorted us to aim to "be with Christ" and to bring the gospel to'all".

CYA-Cagayan de Oro did their own merry-making and thankqiving to God.

was a time lo honor those who have significantly helped the mission ol CYA in the previous year. Awardees were Sr.

Jose{ina Nepomuceno, OSB, of Holy Angel University, and Bro. James Dunne, S.J. of the Ateneo de Manila University, who were inslrumental in helping to establish our CYA groups in those two schools respectively. The third awardee was Rhomel Marcoios who, besides teaching at the Ateneo, also

volunteered his time to be the CYA "unit leader" in that school. Before our anniversary, we had invited

the parents ol CYA members to attend the

exciting work God has given

Lord is working in CYA as a whole as He did in my life. 1992 was a year of challenging battles and rousing victories. Spreading the word ol God was ditficult. Partly it was due to lack ol support from some school or parish administration, and partly because o{ lack

schools is "like an uphill climb." But they're not giving up. lnstead they are spurred on to pray and serve even more. And their efforts are paying off. So far, 1992 is the year that produced the biggest number of new CYA units in various places (Bacolod, Baguio, Naga, Laoag, and Malaybalay, to name a few). I constantly receive inspiring reports from the provinces: Doodz Dalangin of CYA-lligan tells me their problem is finding

CYA-Manila's Area Leaders, told me he

a room big enough for their 300-plus

of interest among some .Youth. Our

staffers, volunteers, student leaders and members, had to work doublY hard to evangelize. Some examPles:

has been knocking on the door of a university for several months, but still hasn't

gotten permission to start there.

Cristine Bellen of CYA-U.P. was ecstatic; her parents attended the anniversary celebration. That's why this is my most memorable gatheringl My parents

have long wanted to know more about CYA--now they dol"

It's good to be back in Manila, striving side by side with all ol you once more in this

us. As I resume my responsibilities as CYA Director, I'm struck by how similarly the

Manny Castaneda of De La Salle University was struck by the deep worship that characterized our times ol prayer. "The things that happened that day were really ditlerent and beyond expectation," he said, "Let's hope that the good etfect isnt only lor a day, but every day."

Right here in Manila, I've not seen such a rich harvest in a long time. Our three Crossroads Retreats last year reached more than 400 students, about twice more than in 1991 . Even our CYA Gatherings and Days of Renewal were bigger by at least a few hundreds. What's encouraging is not just the growth in number, but the youth's positive response to our message. While they might not have come to the Lord easily, they came joyfullyl I believe the Lord wants us to take the lessons we learned last year, and bring them with us as we serve Him this year. By His grace, we hope to win more and more victories, both in our personal lives and in our evangelistic efforts. As we go forth this year, let's do so in great confidence. Battles lie ahead. But we shall ovâ&#x201A;Źrcome. Victories won't come easily. But they will come.

As I look back at the year 1992, two words immediately come to mind: Battles, and Victories. lt was a period of many challenges and celebrations. Personally, I see it as a unique and significant stage in my battle against a serious illness, and in my walk with the Lord. Since August of 1990 I have been fighting cancer. By God's grace that didn't really dow down my service to the Lord, nor did it cause me any great pain. Then the storm

Group will take care of you." A third call came, thistime from Andrew Lee, one of the leaders of the 'Servants of the Lord Community" in Singapore. "Rogel, don't

groups in the Philippines and other parts of Asia.

worry, we'll cover all your medical expenses here," he assured me.

I was speechless (not just voiceress):

Why are you doing this lor

answer was simple: Because the Lord told us so.

for by the members of

year: The tumors on my neck began to

having severe pains in the right side ol my

Chapter. So much love from so many

body. By June, the

tumors had become so large they had to

fast, and I began

be surgically removed, but the

operation damaged my vocal cord. For

three-month stay there. My accom-

greatest desire is to proclaim the gospel, losing my voice was a

majortrial. The storm intensified: Soon afler the operation, a new lump started to growunder fny lott ear. My weight plummeted. I felt weaker and weaker. And as if all this was not enough, even my own oncologist died. What a yearl As I recall those trying times, lam filled with gratitr.de to the Lord for sustaining me

with His grace. He also reminded

constantly that all storms would eventually end. "We are atllicted in every way, but not

crushed; perplexed, but not driven to despair; persecuted, but not forsaken; struck down, but not destroyed" (2 Cor 4:8-9). All the time I had been comlorted by the prayers ol my many Christian friends. Now they marshaled to my aid. Chris and Ched Papworth advised nie to go to Singapore to consult a lop oncologist there. Another friend, Peter Low, called with the message: "Come to Singapore; the Nativity Prayer

superb, the treatment went without a hitch, and lwas constanlly surrounded with loving friends. lnstead of experiencing difficult

side effects from the chemotherapy, I gained at'least ten pounds because-my

appetite (and the food) was so good. The storm clouds were breaking.

After twelve weeks of intense chemotherapy, we waited in suspense as

the oncologisl read the CT scan resulls. His usually reserved manner gave way to something I had prayed to hear: "Fantasticl All clearl Complete remissionl"

As il those blessings weren't enough, we lound an ENT surgeon who performed an operation which restored my voicel Our finding that doctor in Singapore is a miracle story in itself; getting the necessary lunds lor the operation is another testimony to God's faithfulness and providence. (Many thankstotheYouth Praise Ministry, and Mr. Freddie Siow.) Continued on Page 3

of the Assumption (San

Professionals. Couple For Christ. The

All donations to CYA

tax-deductible. Please forward all conespondence to our O(fice at 900 P.