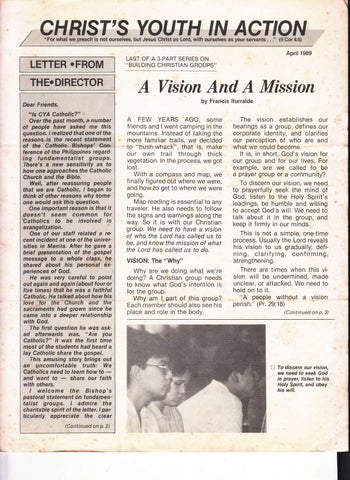 A Vision And A Mission by Francis lturralde

Church and the Bible.

A FEW YEARS AGO, some friends and I went camping in the mountains. lnstead of taking the more familiar trails, we decided to "bush-whack", that is, make

our own trail through

vegetation. ln the process, we got lost. With a compass and map, we finally figured out where we were, and how to get to where we were going. Map-reading is essentialto any traveler. He also needs to follow the signs and warnings along the way. So it is with our Christian group. We need to have a vision of who the Lord has called us to be, and know the mission of what the Lord has called us to do. VISION: The "Why"

Why are we doing what we're doing? A Christian group needs to know what God's intention is for the group. Why am I part of this group? Each member should also see his place and role in the body.

The vision establishes our bearings as a group, defines our corporate identity, and clarifies our perception of who are and what we eould become. It is, in short, God's vision for our group and for our lives. For

example, are we called to be a prayer group or a community? To discern our vision, we need to prayerfully seek the mind of God, listen to the Holy Spirit's leadings, be humble and willing to accept God's will. We need to talk about it in the group, and keep it firmly in our minds. This is not a simple, one-time process. Usually the Lord reveals his vision to us gradually; defining, clarifying, confirming, strengthening. There are times when this vision will be undermined, made unclear, or attacked. We need to hold on to it. "A people without a vision perish." (Pr. 29:18) (Continued on p.3)

To discern our vision, we need to seek God

in prayer, listen to lris Holy Spirit, and obey his will.

alumni in Cebu City last January 20-22. The retreat focused on the ways by which we can grow closer to God: Prayer, Scripture, Service, Sacraments, and Christian Community.

While Rogel and Andrew were down south, another CYA team traveled up north to La Union. The team, composed of Terry Savage, Jun Cruz, Tetel Fernandez and Arlene Macalintal, gave a "mini" Christian Life Series to a group of 40 students from St. Louis College. They were there from January 18-22.

CYA Director Mike Joseph, Jr. spoke on two separate occasions .regarding " Fundamentalism". He 'Tirst addressed the National Con. ference of Youth Ministers (Catholic Bishop's Conf erence of the Philippines-Commission on Youth) at their meeting in Tagaytay. Then he spoke to about 70 students at Maryknoll College at a symposium sponsored by CYA-Maryknoll. ln both occasions, he pointed out the reasons why Catholics join fundamentalist groups, and he gave recommendations on how to respond to their needs as Catholics. YEAR-ENDER

As the school year drew to

close, our staff intensified and consolidated our work in the campuses and among young professionals. ln 1988 alone, over 200 students went through our basic initiation

teaching course. This series of talks leads people to an adult commit-

powers them to live the Christian life.

SUMMER'89 This summer will again be a busy one in CYA. We will have a week-long Summer Teaching Conterence f rom April 17-21 al Layforce. A general session each morning with Mike Joseph will be followed by two simultaneous teaching tracks: Being in a Committed Christian Group, and Building Committed Christian Groups. After the Conference, there will be a week-end retreat for CYA members at the Maryhill Retreat Center, Antipolo. Pre-registration now going on. For more information, please call Tetel Fernandez at #70-80-95. Summer Games '89 will be held on May 7, Sunday. Unless otherwise

How can we accomplish what

God has called us to do? We need to carefully appraise our

resources, time availability, commitment of members, gifts and abilities. Stretching our resources too thinly can make us ineffective or frustrated. We can "burn out." '-Or we can be distracted from our real goals and objectives when "urgent needs" come up. For example, has the Lord called us to evangelize outside of the parish, or does he want us to concentrate on those within the parish? Having our mission clearly in mind keeps us from straying into other roads of Christian service that the Lord did not call us to be on. announced, the venue will be at the

CYA: OUR VISION AND MISSION

vinced by it. Then we need to

Who are we in CYA? What do we do? We are a movement of young men and women, actively engaged in youth evangelization and apostolic service in different campuses in Metro Manila. We are young people who have personally encountered God, and personally committed our lives to him. Now we want to help other young people come into a committed, personal relationship with him and his Church.

through time, entrusting it to "faithful men who will be able to teach others also" (ll Tim 1:2). May our groups endure, faithful to the Lord's call for us! .

it with our members

CYA's mission can be described as the four C's: Bringing others to conversion to Christ. Commitment to him and his Church. Character-formation. And commissioning for active service. To summarize: God has a particular vision and mission for our groups. After having discerned his direction, we need to be

ralde led the 120 men and women in focusing on the theme, " Loving One

We would like to welcome back three staff workers who spent some time in Ann Arbor, Michigan, USA. Rogel Plata and Beth Melchor

received training in campus evangelization and pastoral work from University Christian Outreaeh (UCO), an international campus evangel ization movement closely affiliated with CYA. Both of them were away for a year. Rogel now serves full-time at U.P. while Beth oversees all our outreach to women. Francis ltur-

ralde is back after a threeyear stint with UCO. He under-

together 48 college students from eight different schools. lt was held last February 3-5 at the UST Retreat House in Marikina. The theme was on "The Victory of Christ". Ang Lingkod ng Panginoon, CYA's outreach to young profes-

Earlier in the semester, we sponsored a Men's Retreat for the first time. Forty men from different schools listened to talks by Mike Joseph and other male staff on "Be ing Strong and Courageous". They were inspired to imitate the biblical Joshua in following the Lord.

and led an outreach for Asian

at the University of

Michigan. Francis will be responsible for CYA's administration and

fund-raising, as well as co-leading Lingkod with Gil Galeste.

LOOKING BACK OVER the past ten years, I See very clearly how God has been at work in my life. FIRST LOVE I was a college freshman then.

My firSt love was the

was a second interest. When U.P. offered a new Pre-med course (AB Humanities) that attempted

to integrate "holism" into medicine, I enrolled in it. [t seemed to me compromise.

My first year in college also marked a change in my relationship with God. With the help of other Christian friends, I decided to follow Jesus Christ. No more vain philosophizing. No more roller-coaster emotionalizing. When I committed my life to him, I wanted only to follow him and live my life for his plans and purposes. Thus, unlike my pre-med class-

school was to attain joy in learning, and to devote my free time to

campus evangelization. ln due time, the CYA group for U.P. women, Salt of the Earth, was formed. God took care of all my other needs. ln my junior year, I was running for honors. Could I now try for Medicine at PGH? THE NEXT STEP

. Medicine! That was the first time lthought I might be a doctor. I didn't want to be a doctor! But after much prayer and

from Christian friends, I decided to obey the Lord: Go for it, he seemed to say. Just as I feared, each succeeding year at PGH was a headache. I was convinced I was in the wrong place. But I clung to the fact of God's answer to my prayer. My security was in his resolute faithfulness and reliability. How did I do it? The things I did were unreasonable, even crazy, by med-school standards: I at-

or prayer meetings before major exams.

would last until 8 or 9 PM. prayed for an hour in the early morning when every minute of I

sleep counted; choosing to jog to clear away anxieties while all my classmates were hammering at books for finals ... How did I do it? "Seek first his kingdom and his righteousness,

"When I placed God first in my lite, he took care of all my other needs!" Gltia (left) shares a light moment with

experienced God's kingdom as finding peace amidst turmoil, confidence in the face of trial. I discovered trust, commitment, perseverance and joy amidst uncertainty and trial. .

(Editor's Note; Guia passed all her subjects, became a class officer and student council sec retary. Her grades placed her in the upper half of her batch. She recently passed her medical board exams, and is now joytully serving the"poor).