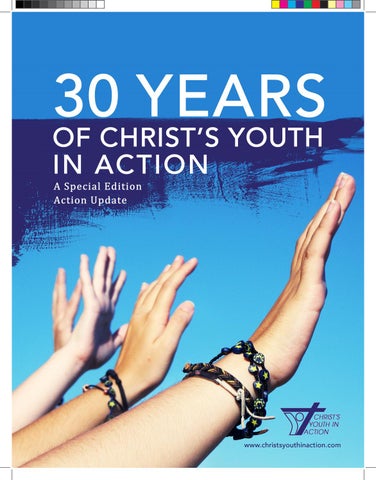 CYA FIRSTS First Name: “Christian Youth in Action”. In 1987, it was changed to “Christ’s Youth in Action” to emphasize we belong to Christ. First Director and Founder: Mike Joseph, Jr.

WHAT ONE MISSION EXPERIENCE IN CYA CREATED A LASTING IMPACT IN YOUR LIFE? Serving and praying over lepers at Tala Leprosarium in December 1983. At first I was hesitant because of the health risks, and the time it would eat up from my break. But God prevailed, and I joined the CYA team to serve. I still recall the message I got from the Lord; we have been blessed by God with our time, talents, and financial resources, so we too could be a blessing to those in need. Ricky Dagelet CYA-DLSU, 1983-1986 CEO, eScience Corporation

“we too could be a blessing to those in need”

I would be the one taking care of others-something I was not comfortable with. But of course, it turned out to be a great weekend.

“I had the confidence to be part of the mission“

First Budget: 10,000 pesos donated by a nun to support the first full-time staffer.

I had the confidence to be part of the mission teams to do weekend LSS. I eventually became a sharer then actually gave a talk or two.

Our Campus Christ Awareness Week in La Salle in 1985. I remember the first time I approached a few fellow La Sallites, all strangers, it was nerve wracking, I had to pray hard for divine intervention. Responses from the students I talked to varied but the satisfaction afterwards was awesome. Sharing the gospel and my personal testimony had an immense impact on me knowing that our Lord was able to use a simple person like me as His vessel. Mondie Mondoñedo CYA-DLSU, 1984-1987 Businessman and Mechanical Engineer

“our Lord was able to use a simple person like me” My first time to be a group leader during a weekend Life in the Spirit Seminar (LSS) for La Salle Students. I thought I was neither worthy nor ready to be part of the team. I also had reservations because I was the youngest member in the CYA UP Diliman. Being a leader meant 2

Young members of the Servants of the Word

30 YEARS: A CALL AND A RESPONSE An Interview with Mike Joseph, Jr. As told to Giki Oliveros and Fatima Hermo What were your thoughts when God called you 30 years ago? Did you have any hesitations then? Actually, I hadn’t even thought to hesitate. There were just so many young people coming to our prayer meeting; there were so many people that the floors were breaking. And then we started to get invited by different schools. You could see that the need was there, the hunger was there. All we had to do was to respond. More people just kept coming, wanting to know the Lord.

“the Lord opened the doors for us”

Four of us, Rogel (Plata), Gil (Galeste), Francis (Iturralde) and myself prayed one whole night to hear what the Lord wanted us to do. We were blown away by what the Lord was telling us, that we will preach the gospel to thousands. The next year, we preached the gospel to 40,000 students. God’s word really came true.

Why the youth? Because we were young. It was the young to the young. Who were the people that we could evangelize? It was the people we knew. We met college students and we realized that college years are decisionmaking years, but the most important decision to make is the decision to follow Christ. That’s where CYA came from.

How were you able to come up with the 4C’s? We were being compared to other organizations and challenged in the schools those years. They were asking us, “Sino ba kayo?” It forced us to think of what things that we should really focus on, so we came up with the 4C’s: Conversion, Commitment, Character, and Commission.

“people need Jesus Christ even more now than ever“

“we will preach the gospel to thousands“

Did it occur to you that this would be a national movement?

We sought the Lord. When the Lord told us to go, we went. We just obeyed. The Lord opened the doors for us and we went through. That was 1977.

No, we just wanted to preach the Gospel and to bring as many university students to the 4Cs as we can and to support them in their walk with the Lord.

What lessons have you learned since the beginning of CYA? The more things change, the more they remain the same. We live in a time of unprecedented growth. The information you receive now in a year is what people received in 5 years back then. Even though the environment is changing, the truth remains the same. People need God. People need Jesus Christ even more now than ever. What Jesus was preaching 2000 years ago is still the same now.

What is in store for CYA in the next 30 years? I am amazed and I am praising God that CYA is still here. Our goal is to be faithful to the call of the Lord, be obedient to God. As long as God wants CYA to exist, then it will, and all we have to do is to obey.

“build your life on Christ “

This decade was a season of reaching out to more people.

“it was a time to serve the wider Church“

CYA had opportunities to bring the light of Christ to Asia, as international delegates from Indonesia, Hong Kong and Singapore, attended our Summer Training Conferences.

A number of mission teams were also sent to Brunei and Singapore from 1991 to 1992.

“opportunities to bring the light of Christ to Asia“

It was a time to serve the wider Church as well. CYA became one of the main movers of a Colloquium for Catholic Chaplains 4

from July 12 to 18, 1994 a conference that served 55 delegates from our Asian neighbors. CYA also played a major role in the 1995 World Youth Day, hosting six simultaneous Members of CYA Manila

events that catered to nearly 40,000 delegates. In 1995, CYA was elected coordinator of the Federation of National Youth Organizations (FNYO).

OUR MISSION PETITION Father in heaven and Lord of all,

We pray especially for the youth.

We approach Your throne as Your young people,

Send forth your Spirit like a mighty rushing wind, and

Called to belong to You, and to share in the mission of our Redeemer.

Awaken the young people of this land.

We pray for our nation. Establish now your reign among us. We pray for peace in our land, provision for our needs, justice, and freedom.

We dedicate ourselves to preach Your word, unweary in well-doing That more young people might offer their lives to You.

This was the battle cry of the decade.

CYAers started using this Mission Petition to pray for the evangelization of the youth and transformation of the nation. This was written by Jake Yap.

Let Your youth build up the Church. Grant us grace to repent from our individual and collective sins, and bring us to genuine conversion.

May Jesus be the Lord of this renewed generation.

May Jesus be the Lord of this renewed nation.

We pray all this through Christ our Lord.

A TIME OF GRACE

Gigi M. Tupas B.S. Physical Therapy Years in CYA-UST: 1989-1994 CYA staffer: 1994-2002 Currently a missionary in Samar I remember the decade of the 90’s as a time of grace for CYA. Yes, there was a lot of pioneering and groundbreaking work and going into unchartered territories. It was not an easy time, mind you, but it was all taken by the brothers and sisters seemingly in stride.

“pioneering and groundbreaking work and going into unchartered territories“

“we go where God leads us“

was giving the organizers a difficult time, but through God’s grace, and faithfulness on the part of those who were called to serve, eventually, many young hearts and minds came to know Jesus and offered their lives to Him.

The CYA groups all started small. There were disappointments because only a handful attended a prayer meeting or a Bible sharing or a CLS (Christian Life Series) or because the administration

Our STCs (Summer Training Conferences) were testimonies to this. They were not only national but international as well.

The image that comes to my mind when recall that time a strong wind carrying and scattering seeds in different directions… yes, it was the wind of the Spirit carrying all of us.

“it was the wind of the Spirit carrying all of us“

I remember a time when 2 people from Brunei attended! Aside from those who came from Luzon, Visayas, Mindanao, Hong Kong, Singapore, Pakistan and USA, of course.

“the seeds will bear fruit, fruit that will last”

We go where God leads us… no ifs… no buts… and in God’s time, the seeds will bear fruit, fruit that will last! 5

THE BATTLE CONTINUES 2000 AND BEYOND

MARCHING TOWARDS A NEW MILLENIUM CYA has been in the front and center of the mission field as more young students are sent on mission:

• CYA became a finalist in the Ten Accomplished Youth Organizations (TAYO) with its rural outreach program in Bataan called Let Your Youth Build Up the Church. CYA won in the regional level and landed in the top 20 at the national level.

“in the front and center of the mission field”

• The annual Crossroads Retreat reaches hundreds of students nationwide powerfully. In Manila alone, more than 200 students encounter God every year through this retreat. 6

LIVING THE LIFE OF A MISSIONARY: KAY KRISTO BUONG BUHAY HABAMBUHAY By Erika Cruz 1st year student AB Psychology, Ateneo de Manila University Mission: San Ramon, Pampanga October 20-24, 2010 I was part of the Mission team of Christ’s Youth in Action that was sent to Pampanga to reach out to the Aetas for 5 days. Those five days were life changing. First of all, we were out of our comfort zones. We slept on the floor, used the poso to take a bath, cooked food using wood and over sized kalderos, woke up early, crammed programs, made Filipino actions songs and transformed some to a rap, hiked on an almost nonexistent trail for two hours, and so many more.

“those five days were life changing”

But as I look back, we faced all of these with joy because God gave us the grace to look beyond all those uncomfortable experiences.

“as I look back, we faced all these with joy“ He taught us to embrace them and solely rely on Him. In the end, we didn’t really mind going through all those and we even enjoyed them.

“He taught us to embrace them and solely rely on Him”

Our Aeta brothers and sisters were really inspiring. I remember when we almost cried during the mass in Kamachile since they offered their best produce or “ani”, although most of their crops were destroyed by the recent typhoon.

Also, during our feeding program, we saw the mothers and the children share food and utensils with other Aetas since there were not enough and utensils. They were willing to give; share what they can even if they were in hard circumstances.

“God has called us to do greater things”

They have taught us the simple act of being happy with what we have and making the most out of it. Moreover, as youth on mission, we realized that God has called us to do greater things and that our Aeta brothers and sisters need help.

OUR REACH CYA is a Catholic movement of young men and women with a mission: to evangelize the youth and train leaders for service of the Church. Having personally experienced the love of God and the saving power of Jesus Christ, we want to share our renewed faith with other young people, that they may also know, love and serve the Lord.

I WANT TO BE AN ACTION PARTNER!