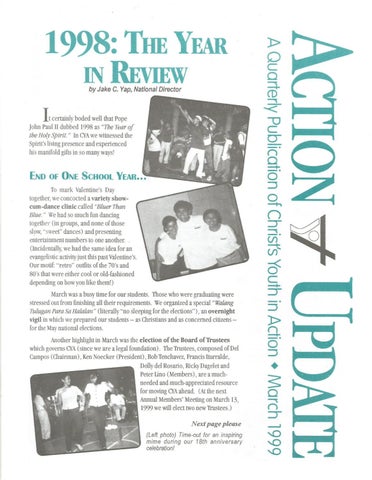 certainly boded well that Pope John Paul dubbed 1998 as "The Year of the Holy Spirit." In CYAwe witnessed the Spirit's living presence and experienced his manifold gifts in so many ways!

END OF ONE SCHOOL YEAR••• To mark Valentine's Day together, we concocted a variety showcum-dance clinic called "Bluer Than Blue." We had so much fun dancing together (in groups, and none of those slow, "sweet" dances) and presenting entertainment numbers to one another. (Incidentally, we had the same idea for an evangelistic activity just this past Valentine's. Our motif: "retro" outfits of the 70's and 80's that were either cool or old-fashioned depending on how you like them!) March was a busy time for our students. Those who were graduating were stressed out from finishing all their requirements. We organized a special "Walang Tulugan Para Sa Halalau" (literally "no sleeping for the elections"), an overnight vigil in which we prepared our students - as Christians and as concerned citizens for the May national elections. Another highlight in March was the election of the Board of Trustees which governs CYA(since we are a legal foundation). The Trustees, composed of Del Campos (Chairman), Ken Noecker (President), Bob Tenchavez, Francis Iturralde, Dolly del Rosario, Ricky Dagelet and Peter Lino (Members), are a muchneeded and much-appreciated resource for moving CYAahead. (At the next Annual Members' Meeting on March 13, 1999 we will elect two new Trustees.) Next page please (Left photo) Time-out for an inspiring mime during our 18th anniversary celebration!

The summer months, as usual, were a time for us to cast our nets both "wider" and "deeper." "Wider" -- the annual Summer Training Conference was extraordinarily blessed and exciting, with about 150 attending. (Another STCwas held in the Visayas -- Bacolod City -- also with great results.) A team from the International Catholic Programme jor Evangelization conducted several sessions on "creative evangelization" which triggered a release of deeper worship and more dramatic styles of evangelizing (mimes, interpretive dances, sign language). Up to now, we are still reaping the harvest of that workshop, as seen in fresh and novel forms of presenting the Gospel in our different schools. Going "deeper," our Summer Training Households brought together about 20 male and 35 female student-leaders for more intensive leadership training. living together for several weeks (the men and women in separate houses, of course!) was a unique opportunity to bond deeply, pray fervently, and serve magnanimously. Finally, since 1998 was the centenary of Philippine independence, our annual sportsfest was playbilled the "Centennial Games" (much like the way many events in 1999 have "Millennium" in their titlel). In addition to the regular basketball and volleyball tournaments, we also played native and parlor games like "limbo rock"!

TO A NEW SCHOOL YEAR

june "kicked off' with activities designed to prime our students for the coming year. In the middle of that month, CYA's"National Council," composed of 16 top national leaders, met in Baguio for its annual meeting. To date, the National Council is still the most effective way of unifying and moving ahead our entire national movement. This new school year tested our ability to creatively organize new types of fun, attractive and evangelistic events for students. Wilderness camps, in such places as Tanay (Rizal) and Mt. Makiling (Laguna), were popular with the guys. And so was a weekend spent living with families in a depressed area. These activities were a conscious effort to win more young men to Christ.

This group ofCYA staffers and members conducted a retreat for the scholars of Metrobank Foundation.

Our smdent-leaders are one of CYA'sgreatest assets and most vital resources. Recognizing that fact, we had special meetings with them every two months in order to give them more input and greater vision for their life and service. Aweekend retreat for them last January 1999 was especially inspiring. In August and in November, CYAwas tapped by the retreats for its more than 200 scholars nationwide. We consider this as one of the year's highlights, a concrete way in which CYAis able to affect a number of gifted university students.

In September, we sent three CYAstaffers to Kuala Lumpur. for a two-week mission called Harvest Outreach '98. Taritan Belen '(Cl'A-Ci;tgayaride Oro), Bob Lopez (a sister from CYA-Manila)and Jane Pradilla (CYA-Pampanga) joined close to 70 other participants from four other countries.Together, the group reached out to more than 2,000 Malaysians through rallies, Life in the Spirit Seminars and other group events.

one "honorary staffer" from ICPE) to Cagayan de Oro for a weekend of "creative evangelization." Then it was off to Valencia, Bukidnon for the 6th Mindanao Conference. The theme, "Holy Spirit: Lord and Giver oj Life, "was invocational, as the Spirit surely was present among the 120 delegates with great power! In this same month, CYAPampanga organized a very successful Youth Training Conference. November 22 was a red-letter day: our 18th Anniversary celebration in the morning, and a prayer rally in the afternoon with our "Partners in Mission. " As usual, the CYAcontingent (450-strong) was the noisiest and most energetic, to the delight of our "more mature" brothers and sisters!

Also in September, our singing group "YOF" went on its first Mindanao tour! Besides drawing enthusiastic applause from audiences in Malaybalay, Cagayan de Oro and Iligan, our talented performers also gave a tremendous shot-in-the-arm to our CYAgroups down south. October saw Jake Yap bringing a team of staffers (plus

(Above photo) "YOF," our inspiring performing group, was interviewed by a radio station in Cagayan de Oro during their successful Mindanao tour.

As we look forward to the rest of this year (less than 300 days before the Jubilee Year') again we are resolutely determined to continue bringing the Gospel to university students in 43 schools, eight parishes, and 23 cities nationwide (plus two cities in the United States). And we especially dedicate this year to the glory of "the God and Father of our Lordjesus Christ, "who is "rich in mercy. May the Lord be praised in all thatwe do! JJ

is a Catholic movement of young Fili-

pinos dedicated to evangelizing the youth and training leaders for the service of the Church. We serve colleges, . universities, parishes and renewal

groups in the Philippines and the Asia-

Donations to CY A from corporate are fully tax-deduct-

with the ft. communities and renewal movements: Ligaya ng

Can you hl!lp us help out gf!nf!tation'? For almost 20 years, CYA has been used by God to reach out to young people throughout the Philippines. Do you want to join us in our mission?

I want to be a partner in your work of reaching out to the youth. Enrol me as an "Action Partner."