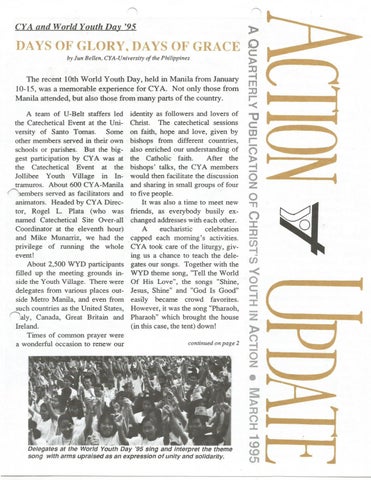 jJ The recent 10th World Youth Day, held in Manila from January 10-15, was a memorable experience for CYA. Not only those from Manila attended, but also those from many parts of the country. A team of U-Belt staffers led the Catechetical Event at the University of Santo Tomas. Some other members served in their own schools or parishes. But the biggest participation by CYA was at the Catechetical Event at the Jollibee Youth Village in Intramuros. About 600 CYA-Manila ("\embers served as facilitators and animators. Headed by CY A Director, Rogel L. Plata (who was named Catechetical Site Over-all Coordinator at the eleventh hour) and Mike Munarriz, we had the privilege of running the whole event! About 2,500 WYD participants filled up the meeting grounds inside the Youth Village. There were delegates from various places outside Metro Manila, and even from such countries as the United States, 0aly, Canada, Great Britain and Ireland. Times of common prayer were a wonderful occasion to renew our

identity as followers and lovers of Christ. The catechetical sessions on faith, hope and love, given by bishops from different. countries, also enriched our understanding of the Catholic faith. After the bishops' talks, the CYA members would then facilitate the discussion and sharing in small groups of four to five people. It was also a time to meet new friends, as everybody busily exchanged addresses with each other. A eucharistic celebration .capped each morning's activities. CYA took care of the liturgy, giving us a chance to teach the delegates our songs. Together with the WYD theme song, "Tell the World Of His Love", the songs "Shine, Jesus, Shine" and "God Is Good" easily became crowd favorites. However, it was the song "Pharaoh, Pharaoh" which brought the house (in this case, the tent) down! continued on page 2

Delegates at the World Youth Day '95 sing and interpret the theme song with arms upraised as an expression of unity and solidarity.

Besides serving at the Catechetical Site, CY A also sponsored six (6) simultaneous Youth Events in all the six districts of Metro Manila: Susan Canlas shared a powerful testimony in the Benedictine Abbey School youth event. Francis Iturralde, former CY A staffer and now executive director of Ang Lingkod ng Panginoon, ably emceed the prowam and led the 5,000 participants to a meaningful commitment to Christ. At Concordia College the crowd of 2,000 appreciated the very moving mime presented by the NET team from Emmanuel Community, Brisbane, Australia. The highly successful Day of Renewal at the Araneta Coliseum was emceed by Simon Rebullida (now leading a CY A group in Los Angeles, California). About 25,000 people inside the coliseum responded enthusiastically to Rogel Plata's challenge to "Be Not Afraid". The atmosphere was so joyful, there was even impromptu dancing on stage! At La Consolacion around 4,000 participants made their commitment to Christ through a symbolic and meaningful candle ceremony. Aldem Salvana and Vanessa Villarosa were a dynamic tandem, emceeing the youth event at Lourdes School (Mandaluyong). This was the only event held out in the open. Fortunately there was no rain, and the sunshine was very mild--truly a blessing from God for the 1,200 delegates there!

3 1. Rogel Plata was appointed Catechetical Site Over-all Coordinator of the Jolfibee Youth Village in Intramuros. 2. The Cardinal of Cameroon gave an inspiring and enlightening talk on "Love" (with Alex Filamor pro viding some "shade").

3. Group sharing after each catechesis was facilitated by CYA members.

Even in the midst of a lot of hard work, Tisha Colayco still sports a sunny smile and disposition.

5. The wildly exuberant song "Pharaoh, Pharaoh" was a crowd favorite, and gave us a chance to "Iet our hair down"! 6. Participants at the CYA-sponsored youth events were feted to spectacular entertainment numbers as well.

7. Rogel spoke before about 25,000 people at the Araneta Coliseum, one of the six venues in which CYA sponsored Youth Events. 8. All geared up for service .. and an aI/night Youth Vigil at the Luneta park! These CYA members were among the 45 million gathered on World Youth Day

9. Some members of the National Evangelization Team from Brisbane (Australia) perform a moving mime to illustrate God's love for us. 10. Together with the Salesians and Focolare, these CYA members performed at the Youth Vigil program in Luneta.

11. Gil Galeste was one of the senior staffers who supervised the service of the CYA members. An event of this magnitude required the unified effort of everyone! 12. Carol /lagan waves from the "camp site" at Luneta--scene of the historic Youth Vigil and WYD celebration. For all of us, it was a once-in-a-Iifetime experience!

4 Finally, Peter Lino and Ria Apostol emceed at St. Paul College in Quezon City. This event drew together 1,200 young people to celebrate God's goodness. All in all, these youth events gave us a chance to share the Gospel with a lot of young people. The participants also loved the inspiring entertainment numbers that CYA members presented in all six events. After these hectic activities, one would think it's time to rest and relax. But no! In fact, on Saturday, January 14, many CYA members had to go to Luneta early in order to attend the Youth Vigil. (Incidentally, CYA-Don Bosco was one of three groups which planned the program at the Youth Vigil.) By mid-afternoon, Luneta was packed like a can of sardines! But that was nothing compared to the crowd that came on Sunday for the World Youth Day celebration

itself. Between four and five million people were said to have been there! Speaking at the Youth Vigil, the Holy Father said at one point, "Too many young people do not realize that they themselves are the ones who are mainly responsible for giving a worthwhile meaning to their lives.... A questio~ therefore is directed to each one- of you personally: Are you capable of giving yourself, your time, your energies, your talents, for the good of others? Are you capable of love? If you are, the Church and society can expect great things from each one of you." CY A and World Youth Day '95 seem to be made for one another. Both are a work of God to bring young people together, and to lead them closer to God. All of us were blessed by that historic event. May we keep the fire burning!

To the following Partners in Mission who generously gave