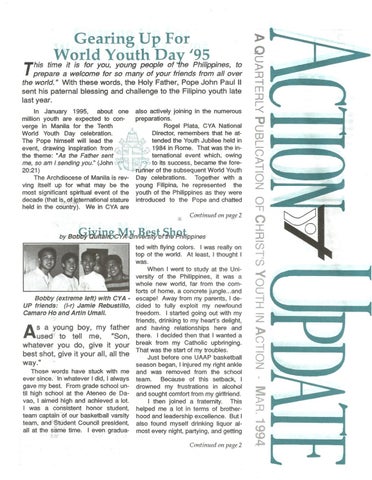 Gearing Up For his ti~

prepare a welcome for so many of your friends from al/ over the world." With these words, the Holy Father, Pope John Paul II sent his paternal blessing and challenge to the Filipino youth late last year. In January 1995, about one million youth are expected to converge in Manila for the Tenth World Youth Day celebration. The Pope himself will lead the event, drawing inspiration from the theme: "As the Father sent me, so am I sending you." (John 20:21) The Archdiocese of Manila is revving itself up for what may be the most significant spiritual event of the decade (that is, of ~,ternationalstature held in the country). We in CYA are

also actively joining in the numerous preparations. Rogel Plata, CYA National Director, remembers that he attended the YouthJubilee held in ~, 1984 in Rome. That was the in<»,,' ternational event which, owing to its success, became the fore~ nher of the subsequent World Youth Day celebrations. Together with a young Filipina, he represented the youth of the Philippines as they were introduced to the Pope and chatted

Those words have stuck with me ever since. "lnwhatever I did, I always gave my best. From grade school until high' school at the Ateneo de Davao, I aimed high and achieved a lot. I was a consistent honor student, team captain -of our basketball varsity team, and 'Student Council president, all at the same time. I even gradua-

ted·with flying colors. I was really on top of the world. At least, I thought I was. When I went to study at the University of the Philippines, it was a whole new world, far from the comforts of home, a concrete jungle...and escape! Away from my parents, I decided to fully exploit my newfound freedom. I started going out with my friends, drinking to my heart's delight, and having relationships here and there. I decided then that I wanted a break from my Catholic upbringing. That was the start of my troubles. Just before one UAAP basketball season began, I injured my right ankle and was removed from the school team. Because of this setback, I drowned my frustrations in alcohol and sought comfort from my girlfriend. I then joined a fraternity. This helped me a lot in terms of brotherhood and leadership excellence. But I also found myself drinking liquor almost every night, partying, and getting Continued

As we eagerly look forward to WYD '95, let us keep in mind the Pope's clear focus:

Gearing Up ... from page 1 with him for a few minutes. "He was so interested in us. I even asked him to pray for a personal matter, and he obliged." Rogel's memories of that papal audience inspire him to mobilize CYA for the WYD '95. "We are lining up some evangelistic activities and training modules throughout this year to spiritually prepare our Filipino youth for that historic event," he says. For example, a Summer Training Conference for youth leaders will be held from April 18-24. A Day of Renewal is scheduled in July, another in November.

Together with Rogel presents a Rome, 1984. That forerunner of the

Giving My ... from page 1 involved in frat rumbles. When I applied again for the school basketball team, my performance really dipped as alcoholism caught up with me. I fought with my coach and teammates as I was again kicked out of the team. After a few months of soulsearching, I decided to run for the school Student Council. Luckily, I won. Yet little did I know it was God's "master pian". In the Council, I met a CYA member who invited me to a Crossroads Retreat. I decided to go. Maybe it was just to escape from another monotonous weekend of drinking and partying. I didn't know at that time it was going to be a lifechanging weekend. At the retreat, I was struck by the speakers who, through their remarkable life transformations, made me realize that the God I knew in my childhood was and is alive, still calling His prodigal son to come home. I be-

gan to realize that I had only one life to live. If I die now, there is no going back. I only have one opportunity to prove my gratitude and love for such a powerful, great and loving God. When I meet Him someday, I want Him to be proud of me. And so, during the retreat I overhauled my whole life. I turned my back on my old ways and decided to commit my entire life to the Lord. Gone now are my drunk-to-death nights, shallow relationships and frat rumbles. I have also stopped lying to my parents about my activities here in Manila. God has really given me a new lease on life, a life which is rooted in Him. Looking back, I can't help but recall my father's words, "In whatever you do, give it your best shot, give it your all, all the way." Now I have chosen to live all my life for the Lord. I am giving Him my best shot, my all, all the way.

Profound Proverbs 1. The quickest way to a man's stomach is through his mouth. 2. Tell me who your friends are, and I'll tell you who my friends are. 3. All birds have feathers. Copyright 1994 by Rogel Plata

"It is my wish that the celebration of these Days may be for all of you a privileged opportunity for formation and, both as persons and communities, for your growth in knowledge of Christ; may it be an inner stimulus to devote yourselves in the Church to the service of your brothers and sisters in building the civilization of love. "

3 News Bits Zamboanga Hosts 4th Mindanao Conference 120 delegates from eight Mindanao provinces met in Zamboanga City last October for a week-long leadership training conference. CYA National Director Rogel Plata was on hand to lead the event. He was supported by National Women's Moderator Renee Punzal, Leo Banog and Cali Maravillas. Stirrings, CYA-lligan's newsletter, reported that by the end of the Conference, the delegates were really inspired and spiritually refreshed. "Equipped with the teaching on the three G's --. Grow, Glow, and Go -- all were made attuned, afresh, and aflame to go on serving Him."

Some participants at the seminar initiate group dynamics. Fun! As part of CYl\s staff development program, Dr. Larry Gamboa and Mrs. Cora Santos, both accredited trainors of the "Seven Habits of Highly Effective People", conducted a seminar for the Staff of CYA-Manila last January. It was a specially adapted Covey seminar, based on more explicitly Christian principles. For two days, the Staff learned how to become more effective in their personal lives. It is hoped that this will also equip them to serve the youth better.

work in two colleges. He reports: "Last September was our Dedication Ceremony for the second batch of CLS this year. We were blessed with 24 new brothers and sisters." CYAMalaybalay has over 20 members studying at the Central Mindanao University. It is led by volunteer Staffer Bebeth Lubos. This summer promises to be another fruitful time for us in CYA.

Fr. Ramon Salinas, OP, with CYA National Director Rogel Plata. CYA celebrated its 13th anniversary last November. Despite some unexpected confusion over the venue, the celebration was joyful and ~~-~~--!~~~~~~~~!!!I spiritually enriching. About 1,000 CYA-Cagayan de Oro sponsored youth packed into a skating rink in Cu- a Crossroads Retreat for 35 students bao for a day of exuberant worship last December 11-12. and inspirational talks. At the Mass earlier in the day, Fr. Ramon Salinas, OP, head of Campus Announcing: Ministry, commended CYA:"I some- Summer Training Conference times wonder what the Campus MinisWe would like to invite you and other try can do without CYA. You have members of your group to attend our helped us to bring the faith to so many week-long Summer Training Confestudents. You do what we in the rence (STC) from April 18-24. Archdiocese precisely need--the multiThe STC will have two parts: the plier effect." training courses during the week, and a concluding weekend retreat. Course Rich Harvest in Mindanao offerings are: Basic Evangelization, CYA-Cagayan de Oro continues Building Committed Christian Groups, to impact students in a number of Christian Manly and Womanly Charschools. Last December, 35 attended acter, Apologetics, Bible Study and Bia Crossroads Retreat. Liceo de Ca- ble Sharing Methods, and the Catholic gayan, Xavier University, and the Min- Faith Series. Two other courses danao Polytechnic State College also (Issues and Christian Sexuality) are conducted the Christian Life Series in by invitation only. The training courses will be held January-February .. at the Lay Formation Center, while the With more than 400 members, retreat will be at the Maryhill Retreat CYA-lligan serves actively in the Center. For more information, write or following parishes and campus: St. call the CYA office. Michael's, San Lorenzo Ruiz, San Roque, St. Vincent, San Isidro Labrador, Steeltown, Ditucalan, and MSU-IIT. Peter Mutia serves as Provincial Leader overseeing CYA-Bukidnon's

Interview With A School Chaplain Fr. John Morota is the young, energetic Chaplain of the Mapua Institute of Technology and Pamantasan ng Lungsod ng Maynila, both in Intramuros. CYA has the joy of working closely with him in reaching out to students in these two schools. Monchit Rivera, CYA-Mapua member, interviews him: CYA: What in your opinion are the spiritual needs of students today? Fr. John: I think students need an alternative in looking for belongingness and acceptance. Through this need, we can respond to their spiritual needs. CYA: What are dangers to the youth today? Fr. John: Sometimes they are. led to believe that some things can make them happy, but in fact they lead to more sadness. There is peer group pressure to do what is not right; drugs, and sometimes even membership in secret cults. CYA: What contribution can CYA make in this situation? Fr. John: The contribution I see is establishing friendships first, then contact and rapport with the students. CYA can lead them to the Lord, especially through your songs

and prayer meetings. These are a very good alternative for young people, who are looking for the Lord and for true meaning in life. CYA: How has CYA helped you in your work as Chaplain? Fr. John: CYA has helped me in gathering young people together, having Bible studies or prayer meetings. Sometimes, it is more effective for young people to evangelizeÂˇtheir fellow youth in the campus. CYA: What is your impression of CYA? Fr. John: I think, as a youth community, CYA can be an example and a very good alternative for other youth communities and peer groups. Especially in your expression of praise and worship to the Lord, in your music, many young people are attracted to you. I hope the CYA will continue in this joyful and meaningful character.

1. For all practical preparations filr the coming Summer Training Conference. Also for all those who will be attending, that even now the Lord will prepare their neerts. 2. For the students who finished the Crossroads retreats and Christian Life Series this semester, that they will persevere in their decision to follow the Lord. 3. For our graduating students, that they will enter into the right careers, and that they may continue to be "salt" and "light" in their new environments. 4. For more Volunteers to sign up and join our CYA Staff, so that we may be able to affect more students in the coming school year.