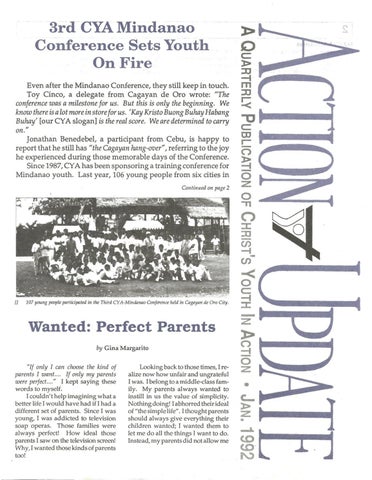 Conference Sets Youth On Fire Even after the Mindanao Conference, they still keep in touch. Toy Cinco, a delegate from Cagayan de Oro wrote: "The

conference was a milestone for us. But this is only the beginning. We know there is a lot more in store for us. 'Kay Krista Buong Buhay Habang Buhay' [our CYA slogan] is the real score. We are determined to carry on. " Jonathan Benedebel, a participant from Cebu, is happy to report that he still has "the Cagayan hang-over", referring to the joy he experienced during those memorable days of the Conference. Since 1987, CYA has been sponsoring a training conference for Mindanao youth. Last year, 106 young people from six cities in Continued on page 2

/lIf only I can choose the kind of parents I want.... If only my parents were perfecL .. I kept saying these /I

words to myself. I couldn't help imagining what a better life I would have had if I had a different set of parents. Since I was young, I was addicted to television soap operas. Those families were always perfect! How ideal those parents I saw on the television screen! Why, I wanted those kinds of parents too!

Looking back to those times, I realize now how unfair and ungrateful I was. I belong to a middle-class family. My parents always wanted to instill in us the value of simplicity. Nothingdoing! I abhorred theirideal of "the simple life". I thought parents should always give everything their children wanted; I wanted them to let me do all the things I want to do. Instead, my parents did not allow me

3rd CYA Mindanao Conference. . . (from page 1) Mindanao, and one from Cebu, gathered in Cagayan de Oro City from October 21-27 for a week of faith, fervor, and fellowship, aptly called "Youth On Fire". The Trainors Team from Manila was composed of CYA Director Rogel Plata, staffers Raoul Roncal, Renee Punzal and Vanessa Villarosa. They shared insights and teachings on such topics as Christian Leadership, Worship, Social Action, Men's and Women's Roles, and Christian Manly and Womanly Character. Many brothers and sisters found the last topic the most interesting one! It was evident that all the CYAMindanao, groups were growing fast! Brian Mahoney, a Catholic lay evangelistworkinginDavaoCity,sharedabout their outreach to the University of Mindanao. CYA-Iligan now has 249 cornmi tted members from six parishes. CYA-Cagayan has decided to hold two

separate prayer meetings every week to accommodate more people. By the next Conference, they promise to send twice as many delegates! Not to be outdone, CYA-Zamboanga proposed that the 1993 Conference be held in Zamboanga City. Laughter and fellowship among brothers and sisters pervaded throughout the time. Besides the training sessions, there were many fun-filled events: A "Cultural Night" showcasing the talents of various groups; a "barn dance"; and a mini-sportsfest held at a beach resort. "Gaisano" is the name of the one of the largest department stores in Cagayan. That was where the delegates went, not to shop, but to do "random evangelization". For most of the participants, it was a scary but challenging experience. They found the exercise very helpful in overcoming their fears in evangelizing others. As they encountered men and women who wanted to know the Lord more, they were strengthened and grew in confidence.

Gina (second from left) poses with some classmates.

to befriend boys my age, thinking I would neglect my studies, or get married at once! Things got worse in high school. When I was bombarded with the usual "teenage problems", I never thought of sharing those things with my parents. "After all," I thought, "they're always against me. They will never understand me." When I entered college at the Far Eastern University, I was invited to a CYA prayer meeting. In a CYA Crossroads retreat I attended later on, I was able to go to confession, but when I

weptit was not for my sins. I was complaining to God: Why don't my parents

all of them to

"Go, set all youth afire!" during the closing ceremonies. After that, it was time to settle down to a more spiritually-focused retreat entitled "Blessed, Broken, and Given Away". And so, months after the Conference, they still talk about it! They say it did not only teach them practical skills, or gave them a sense of community; they say they encountered the Lord in a measure that filled their hearts with joy and peace. The CYA-Mindanao Conference owes its success to many people: the organizers and servants, most of whom came from CYA-Cagayan. Special thanks to the members of Kahayag Sa Dios Communi ty (especially to Mike Fabello and Rene Pacana), Couples For Christ, and the Brotherhood of Christian Businessmen and Professionals for their hospitality and generosity. See you in 1993 in Zamboanga! â&#x20AC;˘

opened my eyes to appreciate my parents' love for me. They have always provided for me, al ways supported me, always wanted to see me happy. The litany of their goodness and love kept filling my mind. Tears came to my eyes. How blind I was all these years! I never really knew my parents until then! For twenty years I deluded myself with an image of "ideal" parents, not seeing my parents as the ''best'' ones the Lord has given to me! My birthday was drawing near, so I wrote them this letter of thanksgiving:

understand me? Why can't they be good? I now realize I was approaching the problem in the wrong way. Rather than praying for them to change, I should change first! I learned this lesson shortly before my twentieth birthday. I was riding the bus to go to a prayer meeting. I found myself thinking how kind my parents were to allow me to attend the prayer meeting. I saw that for many years I was so busy with school and other things-busy with my own lifethat I had no time for them. The Lord

Dear Nanay and Tatay, I thank Godfor giving you to me as my parents. Please forgive me for not loving you enough. After twenty years, it was .only now that I came to realize how fortunate I am to have you as my parents.... I love you both very much. â&#x20AC;˘ Gina will be graduating in March this year with a degree in B.S. Psychology.

[~~N~e~w~s ~B~its~l 11TH ANNIVERSARY CELEBRATION Not even typhoon signal number two could turn away the 600 young people who gathered to celebrate CYA's 11th anniversary last November 17. The La Salle Greenhills St. Benilde Hall proved to be an ideal venue to keep at bay the rain and strong winds. Bishop Ted Bacani gave an illuminating homily at the Anniversary Mass. In spite of a power failure, our guest speaker Bo Sanchez delivered an inspiring exhortation. Rousing entertainment numbers followed the lunch break. The day culminated with a final talk by CYA Director Rogel Plata: In order to express uni ty with CYAManila, several groups in Mindanao also celebrated our anniversary with special events. It is our hope tha t fu ture CYA anniversaries will be celebrated on a national scale.

MEN'S CROSSROADS RETREAT Thirty-five men from several schools in Metro Manila attended our Crossroads retreat last November 30-Decemberl. Led by CYA staffer Terry Savage, the retreat succeeded in bringing the men to a deeper relationship with the Lord. Follow-up will be done in the schools where the men come from.

Terry Savage joins the other men in a lively entertainment number at the Men '5 Crossroads Retreat.

NEW OUTREACHES This second semester, CYA will begin new outreaches in several schools in Metro Manila. Usually, this means getting the approval of the school's Administration or Campus Ministry, organizing a regular Bible study or Christian Life Series, and following-up the people who attend. These new outreaches will be: PEATI, San Sebastian College, Rizal Technological Colleges, Jose Rizal College, and the Naval Architecture and Marine Engineering Institute (NAMEI).

THE BROTHERHOOD OF CHRISTIAN BUSINESSMEN AND PROFESSIONALS The .BCBP is one of CYA's "partners in mission". While CYA reaches out to university students, the BCBP brings the gospel to businessmen and professionals in the marketplace. The BCBP began in January of 1980 when a group of 25 businessmen and professionals met for breakfast once a week. They wanted to support each other in their Christian life amidst the ever-increasing demands of their work. In 1981 they began to invite business colleagues to their breakfasts, and sponsored "Christian Life Programs" in order to bring new members into a fuller experience of the Holy Spirit. The Lord has richly blessed this movement. To date there are 2,000 members in the five full chapters .in Metro Manila; there are also two provincial full chapters, and four provincial outreaches (not yet chapters). To take a closer look at what the BCBPdoes for its members, Ferdie Baena from the Alabang chapter testifies: "The

BCBP culture slowly creeps up on you. You initially become an oddball among your peers, only to shine and stand out again simply because you have chosen to follow a path few have taken, few are willing to defend, and few are willing to adhere to." The BCBP has been a blessing to many businessmen and professionals. We in CYA are also beneficiaries of their generous partnership in our mission: by praying for us, providing job opportunities to our graduates, and supporting our work financially. We, too, help the BCBP in the youth formation programs of some of their chapters. Hand in hand-that's a good way of describing the CYA-BCBP partnership. May we continue to "strive side by side for the faith of the gospel" (Phil 1:27)! â&#x20AC;˘

:.. "If two of you join your voices on earth .to pray for anything whatever, it shall be granted to you." (Matthew 18:19) _" Do you know that, for almost a ::y~ar now, all CYA members throughout the country have been praying the same prayer every day at 9:00 in the morning? This is our "Mission Petition", a prayer of intercession for the Lord to renew and restore our country, especially the youth. It started when several CYA staffers sensed the need to pray for God to have mercy on the Philippines. They sensed the urgency of the times we're in, and the great

need for spiritual revival to sweep our country. One staffer had already been praying every day for this spiritual renewal. Shortly after, he was joined by other staffers, and soon the Mission Petition was formalized to include all CYA members. After it was officially launched at our July Day of Renewal, it quickly gathered momentum in the schools. For instance, our CYA members at the Holy Angel University (Angeles City, Pampanga) pray the Mission Petition at the designated time, and also during their weekly prayer meetings. Besides that, the Administrators of that university are also encouraging other students to join in their prayer! . We believe that praying the Mission Petition everyday has given impetus to CYA's evangelization this past year. Mission teams have been sent to numerous schools and areas in Metro Manila (including the Smokey Mountain garbage dump), and to several provinces in the Philippines. Even the intercessors have been blessed. We experience a rekindling of the fire and zeal to evangelize. New faces show up in our prayer meetings; strangers stop by our meeting places saying "We want to join CYA." We cannot help but praise God for the grace by which He is drawing more young people to Himself! How true is His promise: "...I bring about your restoration

19 men from several CY A campus groups (Don Bosco, UP, PUP, and Ateneo) went on a camping trip to Famy, Laguna, last Oct. 24-25. Staffer Andrew Guitarte, who spearheaded the group, says HIt was tiring, but worth the trip. Who says CYA isn't fun?"