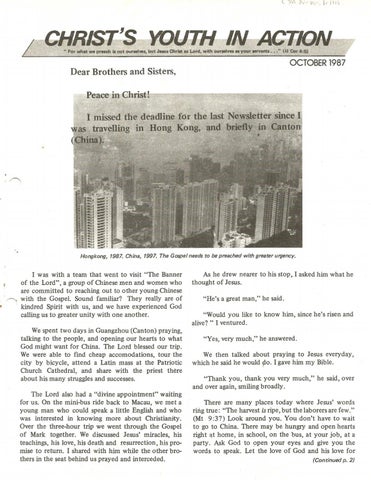 •• For what we preach is not ourselves, but Jesus Christ as Lord, with ourselves as your servants ••.

I was with a team that went to visit "The Banner of the Lord", a group ·of Chinese men and women who are committed to reaching out to other young Chinese with the Gospel. Sound familiar? They really are of kindred Spirit with us, and we have experienced God calling us to greater unity with one another. We spent two days in Guangzhou (Canton) praying, talking to the people, and opening our hearts to what God might want for China. The Lord blessed our trip. We were able to find cheap accomodations, tour the city by bicycle, attend a Latin mass at the Patriotic Church Cathedral, and share with the priest there about his many struggles and successes. The Lord also.had a "divine appointment" waiting for us. On the mini-bus fide back to Macau, we met a young man who could speak a little English and who was interested in knowing more about Christianity. Over the three-hour trip we went through the Gospel of Mark together. We discussed Jesus' miracles, his teachings, his love, his death and resurrection, his promise to return. I shared with him while the other brothers in the seat behind us prayed and interceded.

As he drew nearer to his stop, I asked him what he thought of Jesus. "He's a great man," he said. "Would you like to know him, since he's risen and alive? " I ventured. "Yes, very much," he answered. We then talked about praying to Jesus everyday, which he said he would po. I gave him my Bible. "Thank you, thank you very much," he said, over and over again, smiling broadly. There are many places today where Jesus' words ring true: "The harvest is ripe, but the laborers are few." (Mt 9:37) Look around you. You don't have to wait to go to China. There may be hungry and open hearts right at home, in school, on the bus, at your job, at a party. Ask God to open your eyes and give you the words to speak. Let the love of God and his love for (Continued

New Staff. Since June our CYA Staff has increased by four. Jun Cruz, Raoul Roncal, Andrew Guitarte, and Arlene Macalintal are now actively serving in different affiliates of the CYA Family. The photo below shows them in training under the Director, Mike Joseph, Jr. Lectures, field work, and hands-on training with a Senior Staffer are part of their first year formation as Staffers.

Are you a laborer? Apply now! ripe. The Master is waiting.

Volunteer Workers. We would like to thank Lorraine Bangayan and Agnes Castaneda for their administrative help. Both have helped us tremendously as volunteers. Joe Abiera and Viollie Joaquin are still very much around. To them: Keep up the great work!

Crossroads. A new name for an old but time-tested evangelistic tool: Weekend retreats.The new format makes it a 24-hour activity, beginning on Friday afternoon and ending the same time the following day. Result: Less time involvement (participants still have time to study), less expense, but the same spiritual effect on people's lives. Crossroads retreats this past semester: One at the Ateneo; another for UP students.the most recent one for UST students.

Jake Yap, Mae Legaspi and I were at Hongkong to visit the leaders of 'The Banner of the Lord".

was taken on top of their flat overlooking

Walled City. God's love is penetrating deep into this den of vice, drugs and prostitution.

NEWS ROUND-UP Day of Renewal, This will be our next major CYA event. Set on November 15 at the UST Medicine Auditorium, it will be a whole day event, with talks focusing on the theme: "Ama, Maging Isa Nawa SilangLahat", All are invited. Registration begins at 7 :30 AM.Wewill end at 5':30 PM. liturgy is included.

teaching Davao High School for the past month .. God moving.in the lives of my ....v1nevery honestly told me they are to stop taking drugs, or lying, or in class. A boy's father was murdered, best friend killed shortly afterward. became so embittered he began to d God's existence. But after I shared

loving her even if she has only two or months to live... Another girl was quite notorious. She ~came a rebel when her grandmother, her only source oflove, died last year. So she turned to smoking. She would point a sharp pair of scissors to her neck every time her parents would fight. The nuns in her dorm forced her to attend Mass, which made her angrier towards God. When she asked me for advice, I told her I could only pray for her. Days passed and we never got to talk again. She was always out or "busy". One day I saw her. She was teary-eyed, but smiling! Just the night before she suddenly felt God's peace and love. She cried and cried because she knew it was God. Running into the dorm chapel that night, for the first time in her life she prayed sincerely. The next morning, she shocked her friends (and the

good Sisters)when she volunteered for the First Reading at Mass! Wow! All these in just one month that been here! May God continue to work the lives of the other students here in - Teresa

was getting known as someone who not "share answers." (So my classprefer not to sit beside me during

always wanted to confront my about this but never had the after one CYA Gathering in challenged to take a stand The following day, I have a few words with fl"''''1U1'L!', to them as a that cheating in class God. "If right now we God, how can we of our country to be holier-

. Mindanao Conference. Mike Joseph, Jr. and three other CYA Staffers led the 1st CYA Mindanao Conference at Malaybalay, Bukidnon, last October 2125. In attendance were about 60 participants from Malaybalay, Cagayan de Oro City, Davao City; lligan City, and Zamboanga City. They were mostly alumni of past CYA summer training programs. The conference included talks on personal growth and holiness, and service. It was also a time for consolidating our Mindanao outreach work. The success of the conference could well make it the model for future conferences in the Visayas region, Northern Luzon and Southern Luzon.

Career Direction Seminar. In cooperation with the Institute for Pastoral Development (IPO), CYA is sponsoring a Career Direction Seminar on two consecutive Saturdays: November 14 and 21, 8 AM to 5 PM, at the Lay Formation Center, puadalupe. The speaker will be Dr. Victor Gamboa, who earned his Ph. O. in Business Administration from the University of Michigan. Dr. Gamboa has had extensive experience in giving career direction to college graduates. The uniqueness of the seminar ISthat it gives a Christian approach to job hunting and career planning. A fee of P' 80 will cover the materials for the two days. For information and reservations, please call Reggie Sazon at the IPO Office, telephone no. 708-095. First come, first served.

"My main work is among the men of the University of the Philippines. But I try to find time for other kinds of service. Right now, I'm also able to offer a Christian Life Program to three married couples in our neighborhood. "

Me? A staff worker for CYA? Let me describe myself. I'm 6'4". I have light hair, fair skin, and wear size-13 shoes. I'm a Filipino at heart but I was born in the U.S. When we were growing up, my dad told us (all 13 of us) to be Christian all the way or not at all. I took up his challenge and decided not to be one! In my sophomore year in college I visited my sister in Michigan. I met some of her friends from University Christian Outreach (the international student movement that CYA is part of). I saw in them the qualities that were lacking in my friends and myself. These men and women had character. They were Christians - all the way!

USl; Through UCO I began to enjoy a real relationship with God. I became convinced that God wanted me to offer my whole life to him in service. When I gradua ted in 1983 I became a staff worker for UCO.

Over a year ago I was assigned to work here in the Philippines. "God is giving us plenty of work to do among the youth in Manila," I was told. After seven months of intensive lessons in Tagalog, I have begun to work with some men at U.P. "Mahirap pero masaya talaga! "

Please pray for our work in this university, that many more men will come to friendship with God. All the way! â&#x20AC;˘