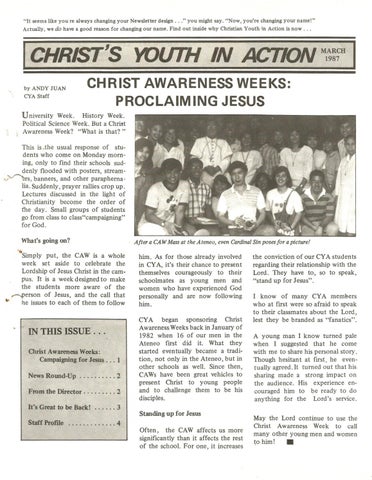 "It seems like youre always changing your Newsletter design ... " you might say. "Now, you're changing your name!" Actually, we do have a good reason for changing our name. Find out inside why Christian Youth in Action is now ...

University Week. History Week. Political Science Week. But a Christ Awareness Week? "What is that? " This is â&#x20AC;˘.the usual response of students who come on Monday morning, only to find their schools suddenly flooded with posters, streamers, banners, and other paraphernalia. Suddenly, prayer rallies crop up. Lectures discussed in the light of Christianity become the order of the day. Small groups of students go from class to class"campaigning" for God. What's going on?

After a CA W Mass at the Ateneo, even Cardinal Sin poses for a picture!

. "irSimp1y put, the CAW is a whole week set aside to celebrate the Lordship of Jesus Christ in the campus. It is a week designed to make the students more aware of the ,..-:...,personof Jesus, and the call that "" he issues to each of them to follow

It's Great to be Back!

him. As for those already involved in CYA, it's their chance to present themselves courageously to their schoolmates as young men and women who have experienced God personally and are now following him. CYA began sponsoring Christ Awareness.Weeks back in January of 1982 when 16 of our men in the Ateneo first did it. What they started eventually became a tradition, not only in the Ateneo, but in other schools as well. Since then, CAWs have been great vehicles to present Christ to young people and to challenge them to be his disciples. Standing up for Jesus

4 Often, the CAW affects us more significantly than it affects the rest of the school. For one, it increases

the conviction of our CYA students regarding their relationship with the Lord. They have to, so to speak, "stand up for Jesus". I know of many CYA members who at first were so afraid to speak to their classmates about the Lord, lest they be branded as "fanatics". A young man I know turned pale when I suggested that he come with me to share his personal story. Though hesitant at first, he eventually agreed. It turned out that his sharing made a strong impact on the audience. His experience encouraged him to be ready to do anything for the Lord's service. May the Lord continue to use the Christ Awareness Week to call many other young men and women to him! â&#x20AC;˘

FROM THE DIRECTOR'S DESK

Talk about opening the year with a bang! Three CYA affiliate groups greeted 1987 by sponsoring Christ Awareness Weeks in their schools. Ateneans were asked: "WHO DO YOU SAY I AM?" Scholasticans were invited to "COME, FOLLOW ME" while, at the same time, the men of Don Bosco were praying, "LORD, LET YOUR KINGDOM COME."

As always, a Christian Life Program was held in almost all the affiliate schools. By the end of this semester, about 160 are expected to have made commitments to CY A.

Summer is fast catching up on us, but we're ready for it! Here is the schedule of our summer events:

"Let us also lay aside every weight, and sin which clings so closely, and let us run with perseverance the race that is set before us, looking to Jesus the pioneer and perfecter of our faith, who for the joy that was set before him endured the cross, despising the shame, and is seated at the right hand of the throne of God. "(Heb 12:1-2) The Lenten season is always the spiritual highlight of my year. It's a time for reflection on my own human condition; the weight and sin that slows . down my pursuit of the Lord. It's also a time for repentance, joyfully availing of the mercy and transformation that's possible in the death and resurrection of our Lord. Lent is a time for rejoicing in the love of God. Christ is victorious ove sin, Satan and death! There is no condemnation for those who belong to Jesus Christ! It's also a time for responding to the Lord even more vigorously; a time to do battle against sin and the forces of darkness by the power of the Holy Spirit. We are called to run with perseverance the long race. God is looking for men and women who won't give up, who won't be distracted by the passing joys of this world, who will run to the end. These are my five R's for Lent: Reflection. Repentance. Rejoicing. Responding. Running the race. May we, in this special season of grace, focus on Jesus with eyes on his resurrection, which also awaits us who persevere to the end. (Continued on p. 4)

Our Summer Games will be held on May 9 this year. As usual, expect some exciting matches and fun-filled competitions. Unless otherwise announced, the Games will be at the Ateneo. CY A Summer Training Course, 1986. Mike leads the participants to a rousing finish!

To celebrate our 5th year in CYA, we will have a Fair starting April 30 and ending on May 1. The fair will kick-off week-long anniversary events in the different afflliate groups. Our Entertainment Night will be held on the evening of May 1. What's a Fair without wacky games, food booths and entertainment? Come and join us!

Budi (at my side) was an Indonesian who became a Christian while I was in the U.S.

No, I haven't grown taller, though you might have heard some preposterous rumors claiming I've put on some weight. Well, we know what to do with mors! I'd like to share with you briefly about my stay in Ann Arbor, Michigan. As you know, I went there for training in University Christian Outreach work (the international campus evangelistic movement that CY A is part of).

Last year, we had more than 300 student leaders go through the Summer Training Course. We expect ,

this year, if not

A Year of Blessings The Lord really blessed me a lot while Iwas there. Exposure to UCO was very helpful, especially working with Asians studying at the University of Michigan. More and more I experienced the Lord calling me to do his work. Even more, the Lord called me to be his man. He taught me what it means to live for him, to be his servant. One luxury I had there was more prayer time. Since I didn't have as much service as I normally have here in Manila, I could return again and again to the --erayer room. "Seek the Lord while he is near, call on him while he may be r blJnd". Isought the Lord, and he answered me in a way that was a delight and joy to my heart. Inever knew prayer could be so enjoyable! Desiring God Also, scriptures became even more meaningful to me. One verse that frequently came to my mind was "Delight in the Lord, and he will give you the desires of your heart." That year, I experienced the Lord giving me the desire of my heart: Himself. Now I want to live for him alone. Like Augustine, Ican say with greater conviction: We were made for you, 0 Lord, and our heart is restless, until it rests in you. •

That the coming national elect-ens will be peaceful; and that God will bless our country with strong, committed Christian leaders.

That the Lord will bless our summer activities, especially in our households and evangelistic events.

That the youth of our country will continue to be open to God, especially during this Lenten season.

Like before, the Training Course will be held at the Lay Foundation Institute, Guadalupe, Makati.

CY A is looking for a volunteer to take pictures of our newsletters and brochures. If you have experience in photography, have some frr time (and a free camera), please let Jake Yap know. (By the way, the film is free!)

I belong to a small family of four: my parents, one brother, and myself. When I was in high school, my parents came to a personal relationship with the Lord, and became part of a Christian community. At that time, I witnessed God transforming them. They influenced me in seeking God for myself, to love and serve him the way they do. After graduation, I offered my services to CY A during the peak summer months. By the end of 1986, I was invited to work full-time. I am struck by the vastness of the work before us. A lot needs to be done among our people, especially the youth. But I am confident of God's abiding presence and love. It's a privilege to say to other young women like myself: "God loves you, and he wants to have a personal relationship with you! â&#x20AC;˘

Tetel (in the middle) during her college days: You've come a long way!

From the Director's Desk (from p.2) This summer CYA turns five years old! We're looking forward to seeing God at work in the lives of all those who'll be in Manila for the celebration. As usual, we'll have summer households, training courses, street evangelism, entertainment nights, prayer gatherings and fellowship. Please keep these months, April and May, in your prayers. And be with us whenever you can.

* * * Two years ago, the staff began to hear the Lord calling us to change the name of CYA. We began to pray and discuss other possible names. Finally, we decided on Christ's Youth in Action. What's so different? The focus is now on Christ, not on us the youth. More than that, we were changed in the process. We've learned to seek the Lord more, to be more obedient to him, to follow his leadings, and to be his servants who seek his glory. We can honestly say that we are Christ's. We belong to him. We offer our lives and our service to him. May we be found acceptable in his sight!