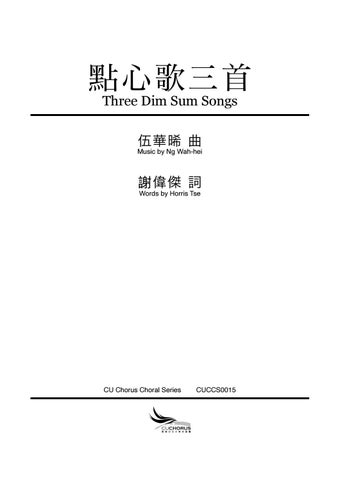 Programme Notes In 2012, the boys’ choir of my alma mater Ying Wa College was going to perform in Europe. Their music teacher, Mr Boron Li, then commissioned a suite with a Hong Kong related theme from me. At that time, I read a few freshly-written rhymes from my friend Horris Tse. I also recently attended a performance of CU Chorus with an all-Whitacre programme, which includes two books of witty choral suites called &quot;Animal Crackers&quot;. From these I had an idea to write a short choral suite with a few humorous short pieces, lasting 6 to 7 minutes. Horris wrote three short poems on dim sum for me to set to music, which became this &quot;Three Dim Sum Songs&quot; (2012). The first and second songs use lively musical devices to portray Malay sponge cake, har gow, and phoenix claw. The third song begins with a collective memory from the time before mobile phones appear — as restaurant staff called out the guest&#39;s name to pick up phone calls, evoking the listeners&#39; nostalgia. Ng Wah-Hei (composer) Ng Wah-hei obtained his Bachelor of Arts and Master of Music degrees at the Chinese University of Hong Kong, majoring in composition under Chan Wing-wah and Victor Chan. He finished his doctoral degree in the Musical Arts at the University of Missouri-Kansas City (UMKC), where his composition teachers included Chen Yi, Zhou Long and James Mobberley. Ng&#39;s compositions are performed by renowned musicians worldwide, including Hong Kong Youth Symphony Orchestra, Grammy Award-winning conductor Charles Bruffy with his Kansas City Chorale, Ensemble ConTempo Beijing, Jenga Percussion Quartet, Talea Ensemble of New York, NEXTET, Hong Kong New Music Ensemble and Les Six. Ngâ€™s music won many awards, including regional winner of SCI/ASCAP Student Composition Commission, First Prize of Crescendo Choral Competition, First Prize of Chamber Music Composition Competition at UMKC, and the Max Di Julio Prize. He currently lives in Hong Kong as a freelance musician. Horris Tse (lyricist) Horris Tse is a founder of a startup company which he currently manages. His encounter with technology began at the age of six, when he learnt computer coding, leading all the way to his studies at the engineering faculty at the Chinese University of Hong Kong. After graduation, he worked in investment-related jobs in companies listed by Fortune Global 500. However, his passion for technology eventually led to him giving up his stable, high-paying occupation, and establishing a startup company, a milestone to his entrepreneurship. Tse has a strong interest in both music and writing. As a violinist, he joined the school orchestras in secondary school and university. He also wrote poems and lyrics, a genre which unites both areas of his interests.   *Programme Notes can be freely reproduced in concert introduction and house programmes. *This piece must be sung in Cantonese. The Cantonese transliteration of the sheet music is based on The Linguistic Society of Hong Kong Cantonese Romanisation Scheme (Jyutping). For guidance on Cantonese pronunciation, please refer to this website: https://www.lshk.org/jyutping

I. There is a type of dim sum1 Covered with bronze skin Its body soft and springy Causing such dripping sensation

But its pores are too big Or it will be admired by all Looking for its name? People will say it is Malay sponge cake2

II. Ordered a dish of har gow3 Then a plate of phoenix claw4 The claw so resembles my lover’s toes Tempting me to take a firm bite

Its nails so polished Its skin well-seasoned with soy sauce… But no matter how good one looks It needs wrappings to hold fresh prawns in har gow!

III. (Miss Chan, please pick up on line two) This announcement is unheard for years The dimsum cart ladies are old and weak Few places left with &#39;one bowl with two pieces&#39;5 Adding morsels of abalone on siu mai6 Is as overdone as adding bird’s nests7 on egg tarts8

Some say I am too stubborn I would say they do not know the tradition All the restaurants are now under giant companies If anything’s to blame, it’s property hegemony

sum ( ): a range of small dishes in Cantonese traditional cuisine for breakfast and lunch, served in Chinese restaurants in Hong Kong and Guangzhou, and Chinese communities worldwide. 2 Malay 3 har

): a Cantonese dumpling that consists of shrimp and wrapper dough that turns translucent when steamed, typically ordered along with siu mai

claw ( and ingredients 5 one

): chicken feet marinated in sauce, such as soy sauce or vinegar, and is often flavored with garlic, minced ginger, cloves, chilli or other spices

): a fluffy yellow cake made of lard or butter, flour, sugar and eggs cooked in a bamboo steamer

): slang for one bowl of tea with two dishes of dim sum, in the old days, tea was served in bowls and dim sum was filling rather

): a Chinese dumping that consists of pork, shrimp, and mushrooms with a small yellow pleated wrapping

nest ( ): swallow’s nest made of solidified saliva harvested for human consumption, has a gelatinous texture and is often used in soup or sweet soup, considered a luxurious ingredient 8 egg

): an egg custard tart, similar to the Portuguese pastel de nata but with a pastry crust and not caramelized. 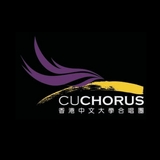