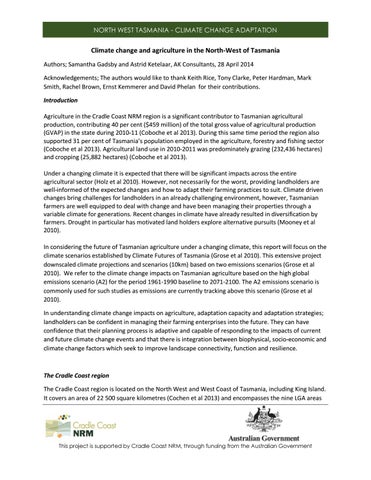 Climate change and agriculture in the North-West of Tasmania Authors; Samantha Gadsby and Astrid Ketelaar, AK Consultants, 28 April 2014 Acknowledgements; The authors would like to thank Keith Rice, Tony Clarke, Peter Hardman, Mark Smith, Rachel Brown, Ernst Kemmerer and David Phelan for their contributions. Introduction Agriculture in the Cradle Coast NRM region is a significant contributor to Tasmanian agricultural production, contributing 40 per cent ($459 million) of the total gross value of agricultural production (GVAP) in the state during 2010-11 (Coboche et al 2013). During this same time period the region also supported 31 per cent of Tasmaniaâ&#x20AC;&#x2122;s population employed in the agriculture, forestry and fishing sector (Coboche et al 2013). Agricultural land use in 2010-2011 was predominately grazing (232,436 hectares) and cropping (25,882 hectares) (Coboche et al 2013). Under a changing climate it is expected that there will be significant impacts across the entire agricultural sector (Holz et al 2010). However, not necessarily for the worst, providing landholders are well-informed of the expected changes and how to adapt their farming practices to suit. Climate driven changes bring challenges for landholders in an already challenging environment, however, Tasmanian farmers are well equipped to deal with change and have been managing their properties through a variable climate for generations. Recent changes in climate have already resulted in diversification by farmers. Drought in particular has motivated land holders explore alternative pursuits (Mooney et al 2010). In considering the future of Tasmanian agriculture under a changing climate, this report will focus on the climate scenarios established by Climate Futures of Tasmania (Grose et al 2010). This extensive project downscaled climate projections and scenarios (10km) based on two emissions scenarios (Grose et al 2010). We refer to the climate change impacts on Tasmanian agriculture based on the high global emissions scenario (A2) for the period 1961-1990 baseline to 2071-2100. The A2 emissions scenario is commonly used for such studies as emissions are currently tracking above this scenario (Grose et al 2010). In understanding climate change impacts on agriculture, adaptation capacity and adaptation strategies; landholders can be confident in managing their farming enterprises into the future. They can have confidence that their planning process is adaptive and capable of responding to the impacts of current and future climate change events and that there is integration between biophysical, socio-economic and climate change factors which seek to improve landscape connectivity, function and resilience.

NORTH WEST TASMANIA - CLIMATE CHANGE ADAPTATION Climate change in the Cradle Coast region Fine scaled climate futures predictions are available for each of Tasmania’s Local Government Areas (Grose, n.d). While most climate variables do not differ substantially between the LGAs in the Cradle Coast NRM region, there are some variances between the West and North West of the State, particularly relating to rainfall. The largest projected changes to rainfall across Tasmania, under the A2 scenario, are expected along the West Coast. Here rainfall will increase up to 20% in winter and spring and decrease by 10-20% during summer and autumn (Grose et al 2010). These changes in rainfall are expected to generate more intense downpours along with longer dry periods (Grose et al 2010). Across the rest of the region rainfall is expected to increase in summer and winter by up to 10% and slightly decrease in spring but little change is expected during autumn (Figure 3).

Figure 3. Climate Futures Tasmania projections of seasonal variation in percentage change of rainfall for Tasmania under the A2 emissions scenario from 1961-1990 to 2071 -2100. Source: Holz et al 2010.

The entire Cradle Coast NRM region is projected to have similar changes in temperature as the rest of the state. That is an increase of 2.6 - 3.3°C (Grose et al 2010). This increase in temperature will also bring about changes including an increase in the number of summer days (days where maximum temperatures are above 25°C) even doubling in some parts and high increases elsewhere (Grose et al 2010). Warm spells are projected to last up to 6 days longer than current. A warm spell is considered days in a row when temperatures are in the top 10% of baseline levels) (Grose et al 2010). Aside from the effects arising from changes in rainfall and temperature, other important agricultural climate indices, as listed in the Climate Futures report (Holz et al 2010), are frost, drought, chilling and growing degree days. Frosts have a history of causing significant damage to broadacre and horticultural crops in Tasmania with most crops likely to be more sensitive to the timing of frost rather than the number of times they

NORTH WEST TASMANIA - CLIMATE CHANGE ADAPTATION experience it (Holz et al 2010). Projections for the Cradle Coast NRM region indicate that there will be a significant reduction in the number of frost risk days across the whole region. In the West Coast and Kentish LGAs it is projected that there won’t be any change in the frequency of drought compared to the present (Grose n.d.). Further north however in the Circular head, WaratahWynard and King Island LGAs, the average time spent in meteorological drought is expected to increase (Holz et al 2010). In contrast, due to the increase in rainfall and heavy rains, the Latrobe LGA is projected to have less time in drought under the A2 emissions scenario (Grose n.d.). Chilling has effects on the growth and flowering of fruits, nuts and berries with some agricultural activities relying on strict dormancy and winter chill conditions for production (Holz et al 2010). Chill hours, or chill units, are a measure of a plants cumulative exposure to chilling temperatures which, for the model used by Holz et al (2010), do not occur below 0OC or above 9 OC. Chill hours are projected to decrease under a warming climate, with the exception of high altitude regions (Grose et al 2010). Growing degree days, also referred to as growing degree units, is a measure of the heat required to grow and ripen crops (Holz et al 2010). GDD have implications for many characteristics of crop production including time of harvest. It is expected that there will be an increase in GDD with the temperature environment currently existing at 300m above sea level becoming present at above 700m above sea level under the A2 emissions scenario (Grose et al 2010). In many areas there may be potential for agricultural enterprises to migrate further “up the hill”. This is likely to result in land use changes and associated impacts on the landscape.

Our approach Sixteen fact sheets have been developed based on literature reviews and industry expertise. The fact sheets are designed to be quick reference guides which provide practical adaptation strategies for farmers. A single fact sheet is available for each major agricultural activity (AGA) in the Cradle Coast NRM region. The AGAs are dairy, beef cattle & sheep, alkaloid poppies, pyrethrum, canola, potatoes, legumes, stone fruits, pome fruits, berries, oleaginous fruits, vegetables, horticulture, viticulture, nuts and cereals. Additional background information is provided for each AGA and these are designed to provide the justifications behind the fact sheets and additional information for advisors and Cradle Coast NRM. To address the variances between the West and North West predicted changes in rainfall we have mapped the Cradle Coast NRM region depicting two zones relating to predicted rainfall change (Figure 1).

Where possible each of the fact sheets refer to the climate modelling conducted through the Climate Futures Tasmania project (Grose et al 2010). Climate Futures monitoring sites relevant to the cradle coast NRM region are Woolnorth, Smithton, Flowerdale, Elliot, Burnie, Tewkesbury, Hampshire, Waratah, Kindred, Spreyton, Merseylea/Sassafras. Due to the diversity of climate across the CCNRM region there will consequently be differing climate change impacts. For this reason, in the case of some agricultural industries, which span across multiple regions, we have described the different likely scenarios relevant to Zone 1 and Zone 2. However, industries such as viticulture and fruit are located in a relatively small area in only one zone and hence this is not necessary. Adaptation Farmers are very adaptable landholders, having managed changes over time and disastrous events such as extended drought. Even so, it is important that all landholders are aware of not only the changes predicted to occur under a changing climate, but also the opportunities which may arise and how to readily adapt to them. Adaptive actions are defined by Scherage and Grambsch (1998), as â&#x20AC;&#x2DC;responses or actions taken to enhance the resilience of vulnerable systems, thereby reducing damages to human and natural systems from climate change and variabilityâ&#x20AC;&#x2122;. Some methods for participatory adaptation for agriculture include diversifying crops, conditioning soils, technological development (including use of biotechnology) and changes in timing for farm practices such as sowing crops and breeding animals in different months to adapt to the changing climate (Mazur et al 2008). Strategies of adaptation will vary not only between the different agricultural activities in the Cradle Coast NRM region but also between

Agriculture in the Cradle Coast NRM region is a significant contributor to Tasmanian agricultural production, contributing 40 per cent ($45...

Agriculture in the Cradle Coast NRM region is a significant contributor to Tasmanian agricultural production, contributing 40 per cent ($45...