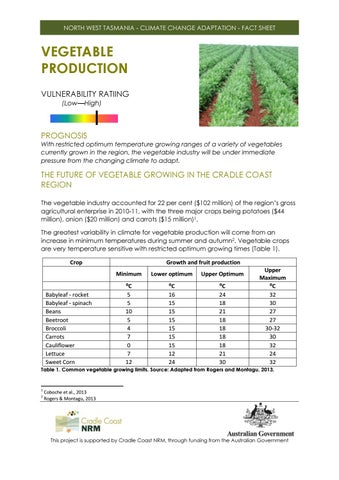 PROGNOSIS With restricted optimum temperature growing ranges of a variety of vegetables currently grown in the region, the vegetable industry will be under immediate pressure from the changing climate to adapt.

THE FUTURE OF VEGETABLE GROWING IN THE CRADLE COAST REGION The vegetable industry accounted for 22 per cent ($102 million) of the region’s gross agricultural enterprise in 2010-11, with the three major crops being potatoes ($44 million), onion ($20 million) and carrots ($15 million)1. The greatest variability in climate for vegetable production will come from an increase in minimum temperatures during summer and autumn2. Vegetable crops are very temperature sensitive with restricted optimum growing times (Table 1). Crop

NORTH WEST TASMANIA - CLIMATE CHANGE ADAPTATION - FACT SHEET The entire Cradle Coast NRM region is projected to have an increase in temperature of 2.6 to 3.3°C, which is similar to the rest of the State3. This is likely to have impacts on the abilities of vegetable growers to continue growing their current crops. Changes in rainfall will vary across the region (Figure 1). The main vegetable growing regions are in the areas surrounding Smithton and Devonport. Rainfall in the Smithton area is projected to increase by up to 20% in winter and spring and decrease by 1020% during summer and autumn3. Around Devonport however, rainfall is expected to increase in summer and winter by up to 10% and slightly decrease in spring, but little change is expected during autumn. These changes in rainfall are also expected to generate more intense downpours along with longer dry periods3. This increase in rainfall intensity is likely to increase the risk of soil erosion.

Figure 1. Climate Futures Tasmania projections of seasonal variation in percentage change of rainfall for Tasmania under the A2 emissions scenario from 1961-1990 to 2071 -2100. Source: Holz et al 2010.

Vegetables are expected to receive higher levels of growth due to rising atmospheric C02 levels and a corresponding improvement in water efficiency2. There will, however, be an increased dependence on irrigation in the Devonport area with a reduction in spring rain.

With restricted optimum temperature growing ranges of a variety of vegetables currently grown in the region, the vegetable industry will be...

With restricted optimum temperature growing ranges of a variety of vegetables currently grown in the region, the vegetable industry will be...