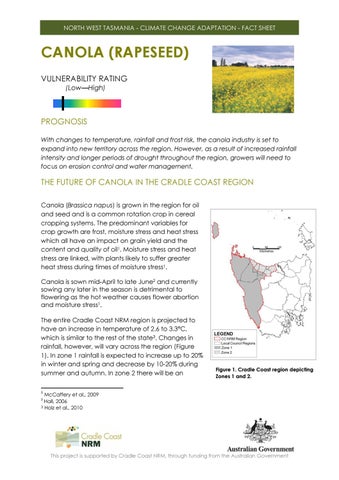 PROGNOSIS With changes to temperature, rainfall and frost risk, the canola industry is set to expand into new territory across the region. However, as a result of increased rainfall intensity and longer periods of drought throughout the region, growers will need to focus on erosion control and water management.

THE FUTURE OF CANOLA IN THE CRADLE COAST REGION Canola (Brassica napus) is grown in the region for oil and seed and is a common rotation crop in cereal cropping systems. The predominant variables for crop growth are frost, moisture stress and heat stress which all have an impact on grain yield and the content and quality of oil1. Moisture stress and heat stress are linked, with plants likely to suffer greater heat stress during times of moisture stress1. Canola is sown mid-April to late June2 and currently sowing any later in the season is detrimental to flowering as the hot weather causes flower abortion and moisture stress1. The entire Cradle Coast NRM region is projected to have an increase in temperature of 2.6 to 3.3Â°C, which is similar to the rest of the state3. Changes in rainfall, however, will vary across the region (Figure 1). In zone 1 rainfall is expected to increase up to 20% in winter and spring and decrease by 10-20% during summer and autumn. In zone 2 there will be an

NORTH WEST TASMANIA - CLIMATE CHANGE ADAPTATION - FACT SHEET increase in summer and winter rainfall by up to 10% and a slight decrease in the spring, however, little change is expected during autumn1. These changes in rainfall are expected to generate more intense downpours along with longer dry periods1 which could have impacts on the canola industry, particularly as canola has a low tolerance to waterlogging1. This increase in rainfall intensity is also likely to increase the risk of soil erosion. The increase in summer rain projected in zone 2 could also present harvesting challenges due to high humidity4. Canola is also susceptible to frost, in particular when pods are small1. Frost risk days are projected to decrease significantly across the entire region1 (Figure 2) and may allow growers to consider new growing sites.

Figure 2. Frost incidence under the A2 emissions scenario. (a) and (b) days with less than 2°C per year (c) and (d) days

summers place additional pressure on irrigation systems in zone 1. ⇒ Awareness of and monitoring for pests and disease.

It is expected that generally a combination of adaptation strategies will work best and there will be overlap between the benefits of adaptation for various crops. 4

With changes to temperature, rainfall and frost risk, the canola industry is set to expand into new territory across the region. However, as...

With changes to temperature, rainfall and frost risk, the canola industry is set to expand into new territory across the region. However, as...