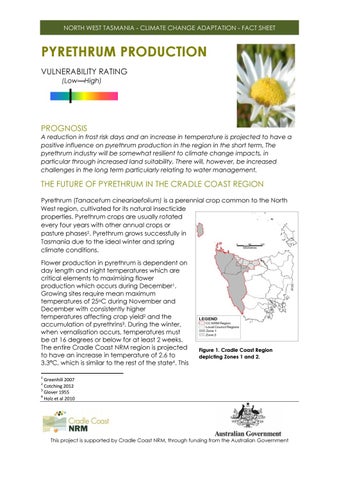 PROGNOSIS A reduction in frost risk days and an increase in temperature is projected to have a positive influence on pyrethrum production in the region in the short term. The pyrethrum industry will be somewhat resilient to climate change impacts, in particular through increased land suitability. There will, however, be increased challenges in the long term particularly relating to water management.

THE FUTURE OF PYRETHRUM IN THE CRADLE COAST REGION Pyrethrum (Tanacetum cineariaefolium) is a perennial crop common to the North West region, cultivated for its natural insecticide properties. Pyrethrum crops are usually rotated every four years with other annual crops or pasture phases2. Pyrethrum grows successfully in Tasmania due to the ideal winter and spring climate conditions. Flower production in pyrethrum is dependent on day length and night temperatures which are critical elements to maximising flower production which occurs during December1. Growing sites require mean maximum temperatures of 25oC during November and December with consistently higher temperatures affecting crop yield2 and the accumulation of pyrethrins3. During the winter, when vernalisation occurs, temperatures must be at 16 degrees or below for at least 2 weeks. The entire Cradle Coast NRM region is projected to have an increase in temperature of 2.6 to 3.3Â°C, which is similar to the rest of the state4. This

NORTH WEST TASMANIA - CLIMATE CHANGE ADAPTATION - FACT SHEET predicted increase in temperature across the region could therefore have an influence on certain pyrethrum growing regions. Changes in rainfall, however, will vary across the region (Figure 1.) In zone 1, rainfall is expected to increase up to 20% in winter and spring and decrease by 10-20% during summer and autumn. In zone 2 there will be an increase in summer and winter rainfall by up to 10% and a slight decrease in the spring, however, little change is expected during autumn4. These changes in rainfall are also expected to generate more intense downpours along with longer dry periods4 Although increases in rainfall

Figure 1. Rainfall zones 1 and 2 for the Cradle Coast region.

in zone 2 is likely to reduce pressures on Figure 2. Frost incidence under the A2 emissions scenario. irrigation during summer, excessive (a) and (b) days with less than 2°C per year (c) and (d) days with less than 0°C per year. Source: Holz et al,. 2010. rainfall of 3 or more consecutive days during flowering can have detrimental impacts on the crop2. Increases in rainfall in summer may also lead to an increase in humidity during harvesting time (December – January). The increase in rainfall intensity is also likely to increase the risk of soil erosion. Frost can be also detrimental to pyrethrum farming, especially during the budding stage (October – November) 2. During the critical growth stages, hard frosts, which occur below -2°C, are more detrimental to the crop than light frosts, which occur at less than 2°C. Frost incidence is expected to decrease under the Climate Futures A2 scenario for the pyrethrum growing region of the NW, although damaging spring frosts may still occur4 (Figure 2).

ADAPTATION OPTIONS FOR PYRETHRUM GROWERS Under a changing climate, increased temperatures and rainfall changes across the pyrethrum growing region may make crop management more challenging. In making the most of the changing climate, farmers could consider the following adaptations; ⇒ Exploring potential for land use change, particularly in regions currently

A reduction in frost risk days and an increase in temperature is projected to have a positive influence on pyrethrum production in the regio...

A reduction in frost risk days and an increase in temperature is projected to have a positive influence on pyrethrum production in the regio...