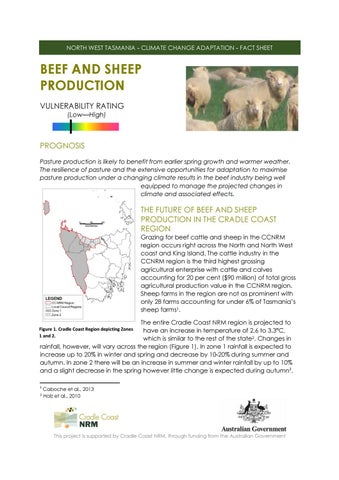 PROGNOSIS Pasture production is likely to benefit from earlier spring growth and warmer weather. The resilience of pasture and the extensive opportunities for adaptation to maximise pasture production under a changing climate results in the beef industry being well equipped to manage the projected changes in climate and associated effects.

THE FUTURE OF BEEF AND SHEEP PRODUCTION IN THE CRADLE COAST REGION Grazing for beef cattle and sheep in the CCNRM region occurs right across the North and North West coast and King Island. The cattle industry in the CCNRM region is the third highest grossing agricultural enterprise with cattle and calves accounting for 20 per cent ($90 million) of total gross agricultural production value in the CCNRM region. Sheep farms in the region are not as prominent with only 28 farms accounting for under 6% of Tasmania’s sheep farms1. The entire Cradle Coast NRM region is projected to have an increase in temperature of 2.6 to 3.3°C, which is similar to the rest of the state2. Changes in rainfall, however, will vary across the region (Figure 1). In zone 1 rainfall is expected to increase up to 20% in winter and spring and decrease by 10-20% during summer and autumn. In zone 2 there will be an increase in summer and winter rainfall by up to 10% and a slight decrease in the spring however little change is expected during autumn2.

NORTH WEST TASMANIA - CLIMATE CHANGE ADAPTATION - FACT SHEET These changes in rainfall are expected to generate more intense downpours as well as longer dry periods2. Pasture for beef and sheep production generally requires less fertilisation and irrigation than dairy, however, like dairy pasture production also relies on ryegrass and white clover in high rainfall areas. In lower rainfall areas in the north of the region other species include phalaris, cocksfoot and subclover. These species are more reliable in these conditions and require fewer inputs with little or no nitrogen required2. Pasture production is expected to be relatively resilient until late in the 21st century. A study conducted by Phelan et al (2014), utilising the Sustainable Grazing Systems (SGS) pasture model3 simulated monthly rainfed pasture production drawing on the Climate Futures Tasmania climate data. One of the five regions studied was Sassafras which is located within the CCNRM region. Pasture production simulated at Sassafras for perennial ryegrass and white clover showed an increase above the baseline by 54% in 2085 (Figure 2)4. Figure 2. box-plots (5th, 10th, 25th, 50th, 75th, 90th and 95th percentile, with dashed mean line) of projected annual pasture production for the baseline, 2050 and 2085 time periods at Sassafras.

This projected increase is due to the increased growth from late winter to spring4. It should also be noted that growth rates for summer decreased below the baseline value but were compensated by the increase in spring growth. The prediction of more intense downpours may result in substantial damage to pasture and may make conditions difficult during late winter and early spring during calving or lambing. This is of particular concern to farmers in zone 1 with a predicted increase in rain in winter and spring by up to 20%. Wet conditions also have complications for disease management. Periods of dry spells may also be detrimental to pasture production as ryegrass goes into dormancy during moisture stress, adding additional pressures on water management across the region. Pasture production in the cool, temperate regions is more resilient to climate change as studies by Phelan et al (2014) show that annual pasture production is projected to increase. During the summer however, there is a decrease in pasture production due to 3 4

NORTH WEST TASMANIA - CLIMATE CHANGE ADAPTATION - FACT SHEET a soil moisture shortfall. This is expected to become an increasing limitation for the region due to increased temperatures and higher evapotranspiration rates4.

ADAPTATION OPTIONS FOR BEEF AND SHEEP FARMERS Pasture growth is projected to increase under the warming conditions of climate change. Graziers can maximise pasture production for extensive dryland pastures (sown and native) in response to changes in climate through the following adaptations; Short term adaptations; ⇒

Increasing forage conservation during the spring to cover summer shortfalls.

Adjustment of stocking and calving & lambing rates to match supply and demand.

Prepare for increased demand for nutrients, including nitrogen fertiliser.

Management of water use and storages to manage summer soil moisture shortfall.

Use of summer-active pasture species in a mixed sward.

Changing to better adapted cultivars to give higher yields.

Exploring potential for land use change, particularly in regions limited by temperature.

Managing of heat stress in livestock through the provision of shade and cooling during times of extreme heat.

Pasture production is likely to benefit from earlier spring growth and warmer weather. The resilience of pasture and the extensive opportun...

Pasture production is likely to benefit from earlier spring growth and warmer weather. The resilience of pasture and the extensive opportun...