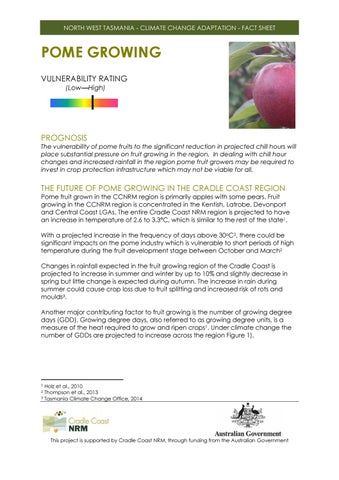 PROGNOSIS The vulnerability of pome fruits to the significant reduction in projected chill hours will place substantial pressure on fruit growing in the region. In dealing with chill hour changes and increased rainfall in the region pome fruit growers may be required to invest in crop protection infrastructure which may not be viable for all.

THE FUTURE OF POME GROWING IN THE CRADLE COAST REGION Pome fruit grown in the CCNRM region is primarily apples with some pears. Fruit growing in the CCNRM region is concentrated in the Kentish, Latrobe, Devonport and Central Coast LGAs. The entire Cradle Coast NRM region is projected to have an increase in temperature of 2.6 to 3.3Â°C, which is similar to the rest of the state1. With a projected increase in the frequency of days above 30oC2, there could be significant impacts on the pome industry which is vulnerable to short periods of high temperature during the fruit development stage between October and March2 Changes in rainfall expected in the fruit growing region of the Cradle Coast is projected to increase in summer and winter by up to 10% and slightly decrease in spring but little change is expected during autumn. The increase in rain during summer could cause crop loss due to fruit splitting and increased risk of rots and moulds3. Another major contributing factor to fruit growing is the number of growing degree days (GDD). Growing degree days, also referred to as growing degree units, is a measure of the heat required to grow and ripen crops1. Under climate change the number of GDDs are projected to increase across the region Figure 1).

NORTH WEST TASMANIA - CLIMATE CHANGE ADAPTATION - FACT SHEET Likely to be the most detrimental climate impact on pome fruit in the region is the projected changes in winter chill hours. Chill hours, or chill units, are a measure of a plants cumulative exposure to chilling temperatures which, for the model used1, do not occur below 0OC or above 9 OC. Under the A2 emissions scenario chill hours at low altitutes are expected to decrease significantly (Figure 2) which will add significant pressure on fruit growers to manage the chill hour requirements for their pome crops (Table 1). The predicted decrease is expected to have negative impacts on the productivity of current cultivars and fruit viability3. Figure 1. Annual growing degree days under the A2 emissions scenario. Source: Holz et al., 2010

ADAPTATION OPTIONS FOR FRUIT GROWERS For growers to continue to prosper under a changing climate there are several adaptation pathways; ⇒

Investigating the potential to introduce new varieties of pome fruit capable of growing in warmer conditions.

Use of chemical dormancy breakers to combat decreasing winter chill.

Continued management of frost risk as it is likely to occur earlier than in the current climate.

Understanding and managing disease and considering the introduction of disease resistant crops.

Exploring the potential for landuse change which may arise in areas currently limited by temperature.