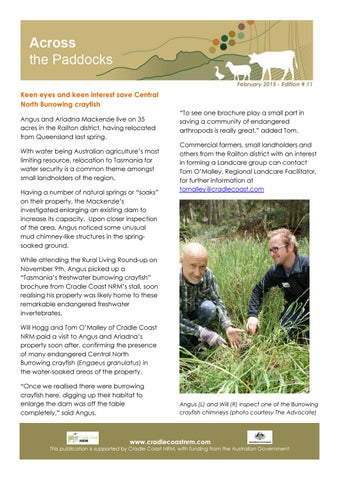 Keen eyes and keen interest save Central North Burrowing crayfish Angus and Ariadna Mackenzie live on 35 acres in the Railton district, having relocated from Queensland last spring. With water being Australian agriculture’s most limiting resource, relocation to Tasmania for water security is a common theme amongst small landholders of the region. Having a number of natural springs or “soaks” on their property, the Mackenzie’s investigated enlarging an existing dam to increase its capacity. Upon closer inspection of the area, Angus noticed some unusual mud chimney-like structures in the springsoaked ground.

“To see one brochure play a small part in saving a community of endangered arthropods is really great,” added Tom. Commercial farmers, small landholders and others from the Railton district with an interest in forming a Landcare group can contact Tom O’Malley, Regional Landcare Facilitator, for further information at tomalley@cradlecoast.com

While attending the Rural Living Round-up on November 9th, Angus picked up a “Tasmania’s freshwater burrowing crayfish” brochure from Cradle Coast NRM’s stall, soon realising his property was likely home to these remarkable endangered freshwater invertebrates. Will Hogg and Tom O’Malley of Cradle Coast NRM paid a visit to Angus and Ariadna’s property soon after, confirming the presence of many endangered Central North Burrowing crayfish (Engaeus granulatus) in the water-soaked areas of the property. “Once we realised there were burrowing crayfish here, digging up their habitat to enlarge the dam was off the table completely,” said Angus.

Insect pests creating pasture pressure Mother Nature has been rather active during 2014 and in early 2015 with respect to generating plenty of insect pest activity in the Cradle Coast region. During autumn, winter and spring 2014 pasture pest activity was high, with many reports of pasture damage predominantly caused by both the autumn and true Corbie grub. The high corbie grub populations were a result of the abundant spring and summer pasture growth during late 2013 and early 2014 which created the ideal conditions for adult Corbie moth egg laying, egg survival and subsequent high grub populations. Will we see the return of these high Corbie grub numbers again in 2015? In most cases probably not, due to recent low spring and summer pasture growth which has potentially meant suppressed egg laying activity and the expectation of much lower egg survival rates. Individual property owners and managers should still be mindful that hay paddocks are always at greater risk and it’s worthwhile checking the property from midautumn onwards to determine if the grubs are present in the pastures and what sort of damage they are doing. It’s important to note that the dry conditions do favour the egg laying activity of the adult Blackheaded cockchafer as they prefer open bared-out pasture and exposed soil. Once the autumn break hits and the eggs hatch, check your pastures to see if they’re sustaining any damage. Pastures growing on

sandy soils are at most risk from Blackheaded cockchafer pest attack. Another insect pest that has been present in high numbers recently is the Diamond Back Moth (DBM), with record flights noted during spring. There have also been field reports of high numbers of Cutworm and Armyworm present in pastures, and many horticultural and cereal crops. DBM larvae only damage Brassica crops such as broccoli, swedes, forage turnips and rape, and have the potential to devastate these crops if they’re not adequately controlled. The adult DBM populations have been exceptionally large recently, with DPIPWE recording 4 889 moths caught in the last week of October 2014, relative to the previous highest weekly catch of 1 712 in early November 2003.

If your crops and pastures are experiencing damage from insect pests and you would like information on how to best manage the situation, contact your local agronomic service provider or Cradle Coast NRM for assistance. With thanks to Jason Lynch, Macquarie Franklin, for this story.

Integrated Pest Management (IPM) course continues One approach to pest control being explored by a group of property owners and managers in the Cradle Coast region is Integrated Pest Management (IPM). The group has been participating in an IPM course supported by Cradle Coast NRM to understand the identification, lifecycle, population monitoring and management options available for common insect pasture pests. Specific attention has been given to how grazing management plays a role in determining if a property may experience pasture pest damage, and whether some form of pest control intervention is required to assist with livestock production targets. Two demonstration sites have also been established to assist participants better appreciate the benefits of improved pasture management and how this can be used to reduce the risk of pasture damage from specific insect pests and also boost pasture utilisation and livestock performance outcomes. These sites are being monitored closely to assess pasture covers and insect pest activity.

Jason Lynch, Senior Consultant at Macquarie Franklin, shares pest ID and control information with course participants at one of the pasture demonstration sites

With thanks to Jason Lynch, Macquarie Franklin, for assistance with this story.

If your propertyâ&#x20AC;&#x2122;s crops and pastures are experiencing damage from insect pests and you would like information on how to best manage the situation contact your local agronomic service provider or Cradle Coast NRM for assistance.

Tried and true versus something new As the saying goes, you can’t get something different if you keep doing what you’ve always done.

We’re hoping to see meaningful results by next spring and if things look promising we’ll continue the studies for another 12 months.”

For the past 50 years, farmers on King Island have relied on fertiliser to make the typically poor soils more productive. The fertiliser of choice has tended to be superphosphate.

“Once the trials are up and running we aim to have more field days during the year so people can see for themselves.”

“The trouble is, we’re just not getting the same results as we used to, by applying phosphorus,” said Rod Graham, Regional Landcare Facilitator, King Island. As the costs of fertiliser and freight increase there is additional pressure on farmers to get more bang for their buck. “We’ve just started a study to work out how to get the most value from fertilisers, and which fertilisers we might need to use. Because our soils get a lot of rainfall, many of the important elements are leached out. We want to see which elements might be added to increase our soil productivity.” Another part of Rod’s work is to see what sorts of microbiology is found in different soils across the island. “We know that healthy soils with a diverse range of microbes tend to be more fertile,” said Rod.

“We’re using 25th anniversary Landcare grant funding to do a 12 month program of testing where we aim to replicate commercial growing conditions as closely as possible.

Across the Paddocks - Edition 11

Across the Paddocks - Edition 11