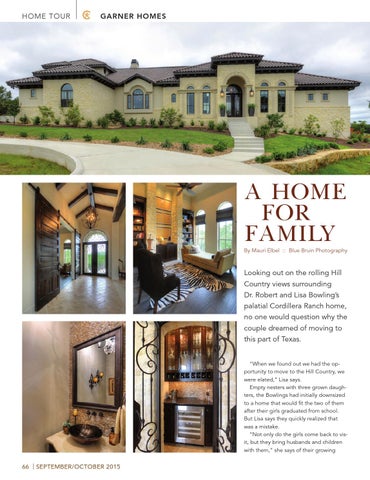 A HOME FOR FAMILY

Looking out on the rolling Hill Country views surrounding Dr. Robert and Lisa Bowling’s palatial Cordillera Ranch home, no one would question why the couple dreamed of moving to this part of Texas. “When we found out we had the opportunity to move to the Hill Country, we were elated,” Lisa says. Empty nesters with three grown daughters, the Bowlings had initially downsized to a home that would fit the two of them after their girls graduated from school. But Lisa says they quickly realized that was a mistake. “Not only do the girls come back to visit, but they bring husbands and children with them,” she says of their growing