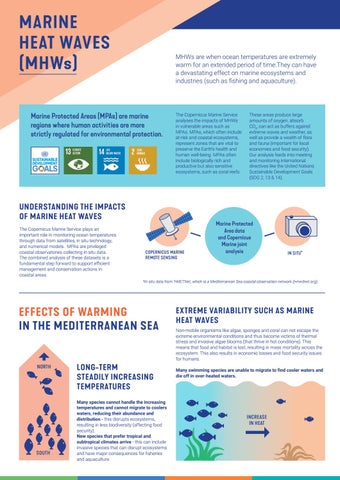 MHWs are when ocean temperatures are extremely warm for an extended period of time.They can have a devastating effect on marine ecosystems and industries (such as fishing and aquaculture).

The Copernicus Marine Service analyses the impacts of MHWs in vulnerable areas such as MPAs. MPAs, which often include at-risk and coastal ecosystems, represent zones that are vital to preserve the Earthâ&amp;#x20AC;&amp;#x2122;s health and human well-being. MPAs often include biologically rich and productive but also sensitive ecosystems, such as coral reefs.

UNDERSTANDING THE IMPACTS OF MARINE HEAT WAVES The Copernicus Marine Service plays an important role in monitoring ocean temperatures through data from satellites, in situ technology, and numerical models. MPAs are privileged coastal observatories collecting in situ data. The combined analysis of these datasets is a fundamental step forward to support efficient management and conservation actions in coastal areas.

These areas produce large amounts of oxygen, absorb CO2, can act as buffers against extreme waves and weather, as well as provide a wealth of flora and fauna (important for local economies and food security). Our analysis feeds into meeting and monitoring international directives like the United Nations Sustainable Development Goals (SDG 2, 13 &amp; 14).

*In situ data from T-METNet, which is a Mediterranean Sea coastal observation network (t-mednet.org).

EFFECTS OF WARMING IN THE MEDITERRANEAN SEA

LONG-TERM STEADILY INCREASING TEMPERATURES Many species cannot handle the increasing temperatures and cannot migrate to coolers waters, reducing their abundance and distribution - this disrupts ecosystems, resulting in less biodiversity (affecting food security). New species that prefer tropical and subtropical climates arrive - this can include invasive species that can disrupt ecosystems and have major consequences for fisheries and aquaculture.

EXTREME VARIABILITY SUCH AS MARINE HEAT WAVES Non-mobile organisms like algae, sponges and coral can not escape the extreme environmental conditions and thus become victims of thermal stress and invasive algae blooms (that thrive in hot conditions). This means that food and habitat is lost, resulting in mass mortality across the ecosystem. This also results in economic losses and food security issues for humans. Many swimming species are unable to migrate to find cooler waters and die off in over-heated waters.

The 3rd Edition of the Ocean State Report (OSR3) has a focus on information and changes in the marine environment up to the year 2017 and the full report is publised in the Journal of Operational Oceanography (JOO). The OSR3 Summary covers the key take-aways of the report and is intended to boost ocean literacy for the general public and provide high-level ocean information for actors in the marine domain. 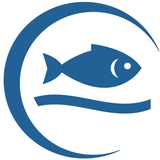