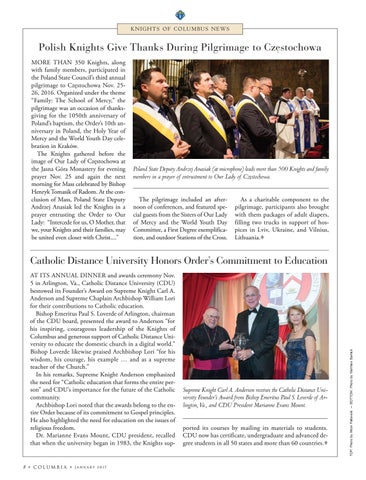 Polish Knights Give Thanks During Pilgrimage to Czestochowa â&#x20AC;&#x2DC; More than 350 Knights, along with family members, participated in the Poland State Councilâ&#x20AC;&#x2122;s third annual pilgrimage to CzÄ&#x2122;stochowa nov. 2526, 2016. organized under the theme â&#x20AC;&#x153;Family: the School of Mercy,â&#x20AC;? the pilgrimage was an occasion of thanksgiving for the 1050th anniversary of Polandâ&#x20AC;&#x2122;s baptism, the orderâ&#x20AC;&#x2122;s 10th anniversary in Poland, the holy Year of Mercy and the World Youth Day celebration in KrakĂłw. the Knights gathered before the image of our Lady of CzÄ&#x2122;stochowa at the Jasna GĂłra Monastery for evening prayer nov. 25 and again the next morning for Mass celebrated by Bishop henryk tomasik of radom. at the conclusion of Mass, Poland State Deputy andrzej anasiak led the Knights in a prayer entrusting the order to our Lady: â&#x20AC;&#x153;Intercede for us, o Mother, that we, your Knights and their families, may be united even closer with Christ....â&#x20AC;?

Poland State Deputy Andrzej Anasiak (at microphone) leads more than 500 Knights and family members in a prayer of entrustment to Our Lady of Czestochowa. â&#x20AC;&#x2DC; the pilgrimage included an afternoon of conferences, and featured special guests from the Sisters of our Lady of Mercy and the World Youth Day Committee, a First Degree exemplification, and outdoor Stations of the Cross.

as a charitable component to the pilgrimage, participants also brought with them packages of adult diapers, filling two trucks in support of hospices in Lviv, Ukraine, and Vilnius, Lithuania.â&#x2122;Ś

at ItS annUaL DInner and awards ceremony nov. 5 in arlington, Va., Catholic Distance University (CDU) bestowed its Founderâ&#x20AC;&#x2122;s award on Supreme Knight Carl a. anderson and Supreme Chaplain archbishop William Lori for their contributions to Catholic education. Bishop emeritus Paul S. Loverde of arlington, chairman of the CDU board, presented the award to anderson â&#x20AC;&#x153;for his inspiring, courageous leadership of the Knights of Columbus and generous support of Catholic Distance University to educate the domestic church in a digital world.â&#x20AC;? Bishop Loverde likewise praised archbishop Lori â&#x20AC;&#x153;for his wisdom, his courage, his example â&#x20AC;Ś and as a supreme teacher of the Church.â&#x20AC;? In his remarks, Supreme Knight anderson emphasized the need for â&#x20AC;&#x153;Catholic education that forms the entire personâ&#x20AC;? and CDUâ&#x20AC;&#x2122;s importance for the future of the Catholic community. archbishop Lori noted that the awards belong to the entire order because of its commitment to Gospel principles. he also highlighted the need for education on the issues of religious freedom. Dr. Marianne evans Mount, CDU president, recalled that when the university began in 1983, the Knights sup â&#x2122;Ś COLUMBIA â&#x2122;Ś