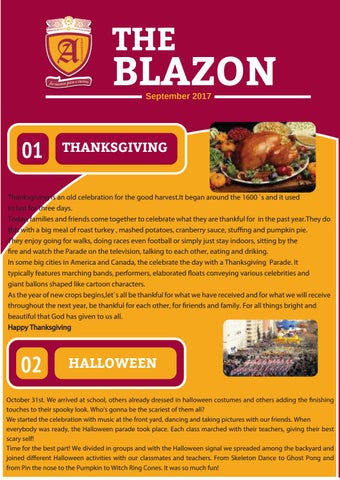 Thanksgiving is an old celebration for the good harvest.It began around the 1600 `s and it used to last for three days. Today, families and friends come together to celebrate what they are thankful for in the past year.They do this with a big meal of roast turkey , mashed potatoes, cranberry sauce, stuffing and pumpkin pie. They enjoy going for walks, doing races even football or simply just stay indoors, sitting by the fire and watch the Parade on the television, talking to each other, eating and driking. In some big cities in America and Canada, the celebrate the day with a Thanksgiving Parade. It typically features marching bands, performers, elaborated floats conveying various celebrities and giant ballons shaped like cartoon characters. As the year of new crops begins,let`s all be thankful for what we have received and for what we will receive throughout the next year, be thankful for each other, for firiends and family. For all things bright and beautiful that God has given to us all. Happy Thanksgiving

October 31st. We arrived at school, others already dressed in halloween costumes and others adding the finishing touches to their spooky look. Who's gonna be the scariest of them all? We started the celebration with music at the front yard, dancing and taking pictures with our friends. When everybody was ready, the Halloween parade took place. Each class marched with their teachers, giving their best scary self! Time for the best part! We divided in groups and with the Halloween signal we spreaded among the backyard and joined different Halloween activities with our classmates and teachers. From Skeleton Dance to Ghost Pong and from Pin the nose to the Pumpkin to Witch Ring Cones. It was so much fun!

Next, it was time for the Halloween Photoshoot. Everybody stroke their best pose in their costumes. Weird, creepy or scary, our photos turned out spook-tacular!

Theater afternoon - Sherlock Holmes The fictional character of the British author Sir Arthur Conan Doyle, Sherlock Holmes, accompanied the readings of many people around the world with his investigations. We had the chance as a school to watch a theater play where Sherlock Holmes and his partner Dr. Watson are looking to solve the mystery in Scotland. But which mystery theater play consists only of two actors? That's definitely impossible! And at the same time the fun thing about this play; we had the chance, not only to interact with the actors, but also to be part of the play by acting out small roles and improvising dialogues on stage. The result? Hilarious! We laughed with our heart and, most importantly, we solved the mystery in Scotland. Until next time Holmes!

This year our Christmas Party was hosted at Aula Magna an amazing venue. The theme was an adaptation of Charlie and the Chocolate Factory by Roald Dahl. The children had so much fun and everybody was really involved by the Christmas spirit felt at the party. Now it is time to relive all the emotions and amazing set in our Christmas vĂ­deo available soon at the School Office.

At Astoria International School , we believe in opening our students’ minds and horizons hoping that, as a result, our students become more aware of their surroundings. To reinforce these values the students and the school embark in a mission to support an Association in our local community – Os Companheiros da Noite. By giving food, goods, and recycled items that you might have at home is a great way of helping others. What an effort we have seen from the whole school. Congratulations to all the classrooms. Together we have made a difference and once more Congratulations to all participants for the effort and commitment shown in this initiative.

The first meeting of our new Erasmus + Project , YES – Young Enterprising Students) took place in December in our coordinator school’s country- Poland. It was a very interesting meeting where we’ve learnt a lot and got to know our partners for the next three years Project. We were given the opportunity to join a Christmas Market and Christmas concert at School. Alongside with these opportunities we were able to learn more about their educational system and some pedagogical methods that are different from ours but quite interesting to analyse. Overall it was a very positive and engaging meeting where we all exchanged good practices and ideas.

In a series of afternoon the pedagogical staff got together for a funny and informal talk with the parents of our school about Art skills. The teachers shared some of their strategies used in every day classes. Throughout the whole afternoon the parents were very enthusiastic to participate, helping the teachers in the practical activities, sharing in the end their daily activities as well. The amazing results were shown at the Christmas party exposition. Stay tuned for this term theme!!!!! 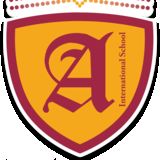