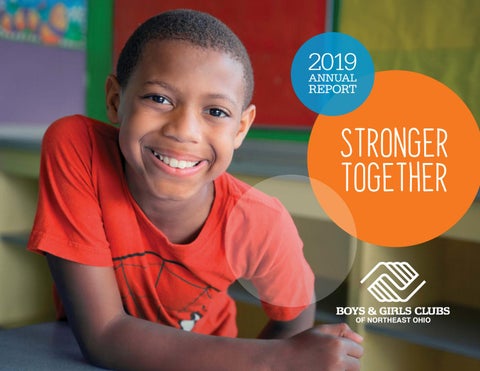 STRONGER TOGETHER OF NORTHEAST OHIO

“Sometimes my teacher will ask me a question and I already know the answer because I learned it at the Boys & Girls Club.”

Celebrating a watershed year for our Clubs You are making such a difference in the lives of the kids who need us most. Thank you. In 2019, you played an important role in the merger that created Boys & Girls Clubs of Northeast Ohio. Without your support, we could not have brought together Clubs in Cleveland, Lorain County, Akron and Erie County under a single name for the expressed purpose of helping more kids. It was the largest merger of Boys & Girls Clubs in the United States. Since the merger took place at mid-year, we are not able to show you our 2019 financials in this annual report. The report also will not reflect the impact of the COVID-19 pandemic on our Clubs. What the publication will commemorate is a remarkable year in which four different organizations in five counties spanning 2,200 square miles joined forces to improve the lives of kids and their families. It will show how your support made it possible to operate 39 Clubs throughout the region. It will show you why providing safe, fun places for kids after school is so important. We think this is worth celebrating. And it would not have been possible without you. As we move into this new era, please know that you will play a pivotal role in our success. We will advocate for our kids and their families. We will continue to provide new opportunities for youth. We will continue to be the place where kids find caring adult mentors. We will continue to fight for racial equity and social justice so our youth can grow up in a better, more just world. We are honored you are joining us on this journey.

“The Club is a place where I feel comfortable, like I’m with family. It is my second home.”

Denise, 14, a sophomore sprinter at Akron’s Archbishop Hoban High School, used to let her track skills do the talking. “I was quiet,” she says, “even anti-social.” Then she joined SMART (Skills Mastery and Resilience Training) Girls, a smallgroup health, fitness, prevention/education and self-esteem enhancement program at Boys & Girls Clubs. There, she found friendship – and her voice. “We talk, and we relate to each other. I think all of us open up,” Denise says. SMART Girls is designed to meet the developmental needs of girls in three age groups, spanning ages 8 to 18. Through dynamic sessions, participatory activities, field trips and mentoring opportunities with adult women, Club girls explore their own and societal attitudes and values as they build skills for eating right, staying physically fit, getting good health care and developing positive relationships with peers and adults. In Akron’s three Clubs, 48 girls were involved in the program last year. That speaks volumes to its importance in the lives of girls who might otherwise feel alone.

at the Clubs in Cleveland

In the span of five years, Crystal, 13, went from knowing nothing about music to writing her own songs and performing the National Anthem at a Cleveland Cavaliers game. She is just one of the more than 1,500 kids who are involved in Club arts programs ranging from music to dance to painting. Giving kids these kinds of opportunities is vitally important during a time when many schools are dropping or drastically reducing their arts programming. In addition to these offerings, Ohioâ&#x20AC;&#x2122;s only two Notes for Notes recording studios â&#x20AC;&#x201C; places where kids can learn to play instruments and record music â&#x20AC;&#x201C; are located in Cleveland Clubs. The arts are important to developing resilience, self-confidence and critical-thinking skills.

733 average daily attendance at our clubs

“At the Club, I found people that I can go to for help with anything. They gave me the confidence to succeed.”

Reese, 13, never belonged to a Boys & Girls Club until one opened in his school last fall. When he started going to the new Club in Sandusky’s Ontario Village at Adams, he was hooked. Every day after school, he drops by the Club for homework help, athletics, mentoring and a meal. “And,” he says, “I’ve made a lot of new friends.” No wonder: Since the Club moved to Ontario Village from a site just down the street, attendance has tripled. There have been days when more than 100 kids have come to the new Club – a big jump from the 30 or so youth who typically showed up at the old location. The difference? “Space – we have room for so many more activities, inside and out,” says Site Director Sheila Graves. Our Clubs were able to make the move by winning a highly competitive federal 21st Century Community Learning Centers grant. The early returns are a win for Sandusky’s kids.

97% of members qualifying for free or reduced-price lunches

“You learn a lot here, but you also have a whole bunch of fun.”

For kids like Zy’Aire, 9, becoming a better reader may be the difference between success and discouragement in school. That’s why our Clubs’ SPARK (Spheres of Proud Achievement in Reading for Kids) program is so vital. Kids in kindergarten through third grade work individually with the same reading tutor throughout the school year. They are able to improve their reading skills before they lag too far behind their peers and become frustrated. The program works: Kids participating in SPARK at two Lorain County Clubs last school year improved their reading scores at a 39% higher rate than those who did not take part in the program. Academic success is one of the pillars of Boys & Girls Clubs. Your support of this program is helping more kids succeed in the classroom and develop a lifelong love of reading.

hot meals prepared by our kitchen

average daily attendance at our clubs

On July 1, 2019, Clubs in Cleveland, Akron, Lorain County and Erie County merged to form Boys & Girls Clubs of Northeast Ohio. A Canton Club was approved in late 2019 and opened in January.

Our vision To provide a world-class Club experience that assures success is within reach of every young person who comes through our doors, with all members on track to graduate from high school with a plan for the future, demonstrating good character and citizenship and living a healthy lifestyle. 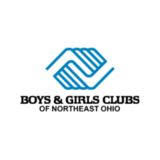