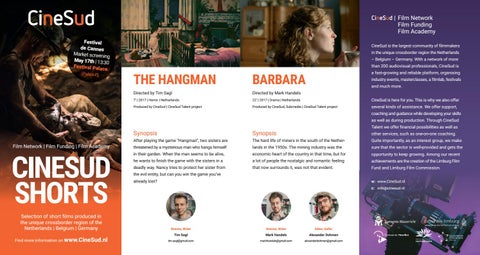 CineSud | Film Network Film Funding Film Academy CineSud is the largest community of ﬁlmmakers in the unique crossborder region the Netherlands – Belgium – Germany. With a network of more than 200 audiovisual professionals, CineSud is a fast-growing and reliable platform, organising

CineSud is here for you. This is why we also offer

industry events, masterclasses, a ﬁlmlab, festivals and much more.

coaching and guidance while developing your skills as well as during production. Through CineSud

Talent we offer ﬁnancial possibilities as well as

After playing the game “Hangman”, two sisters are

The hard life of miners in the south of the Nether-

Quite importantly, as an interest group, we make

threatened by a mysterious man who hangs himself

lands in the 1950s. The mining industry was the

sure that the sector is well-provided and gets the

in their garden. When the man seems to be alive,

economic heart of the country in that time, but for

opportunity to keep growing. Among our recent

he wants to ﬁnish the game with the sisters in a

a lot of people the nostalgic and romantic feeling

achievements are the creation of the Limburg Film

deadly way. Nancy tries to protect her sister from

that now surrounds it, was not that evident.

other services, such as one-on-one coaching.

the evil entity, but can you win the game you’ve already lost?

CineSud | Distribution and sales Annually CineSud (co-)produces among 5 to 8 productions. These productions are actively being submitted and represented at ﬁlm festivals around the world. We are proud that our ﬁlms got selected to more than 300 ﬁlm festivals worldwide and won more than 50 awards. CineSud as well distributes

other (short) ﬁlms made in our unique crossborder

ﬁlmmaker, a festival or a company, please contact us.

region the Netherlands - Belgium - Germany. If you are interested in cooperating, whether you are a

Through the lens of a view-master a young boy

Obsessed by his handheld game a man doesn’t

Coquille is a poetic roadmovie about a young

looks at images of his future self. His dreaming

notice that the game is overtaking his reality.

singer overcoming her insecurity through her

comes to an abrupt end when someone steals his

view-master. To take the future back in his own hands he must go on a journey through vast labyrinths, setbacks and personal growth. 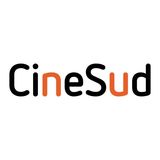 This year CineSud takes 10 filmmakers from Limburg to Cannes Film Festival! CineSud Shorts go to Cannes to have a Market Screening on May 17...

This year CineSud takes 10 filmmakers from Limburg to Cannes Film Festival! CineSud Shorts go to Cannes to have a Market Screening on May 17...