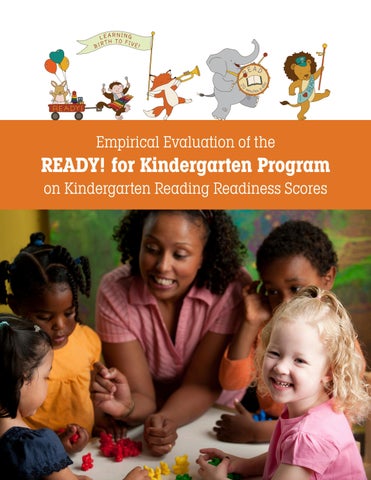 Empirical Evaluation of the

Paul Strand, Ph.D., Principal Investigator Washington State University Tri-Cities/Thrive by Five Washington SUMMARY Scores: Evaluating a Multi-Ethnic and Multi-Linguistic Sample The study explored data of 4,241 children from 2005-2008 gathered in the Kennewick (WA) School District to determine if the entering Kindergarten Reading and Math readiness scores of children whose families were exposed to READY! differed from those who were not. The results of statistical analyses revealed that such differences did emerge for the entire sample, and also for specific subsamples. With respect to the entire sample, children whose families were exposed to READY! outperformed children whose families were not exposed to READY! on both entering Kindergarten Reading and Math assessments. In fall 2008, 79% of children whose parents attended READY! classes met the standard for kindergarten, compared to 55% with parents who didn’t, regardless of family income level. READY! attendees also outperformed non-attendees in math readiness. Similar differences were observed for ethnic subgroups including children listed as Caucasian and Latino, and also non-Latino minority children. Similarly, significantly higher entering Kindergarten scores were observed for READY! attendees compared to non-attendees for the subgroups of children receiving free-andreduced-priced lunch and for children identified as qualifying for special education. The only finding that was contrary to this pattern of results was obtained for children identified as English Language Learners (ELL) because the sample size was not large enough for statistical significance. Results also revealed a “dosage effect” such that greater session attendance predicted better Kindergarten assessment scores. “Developmental timing effects” were also observed such that attendance at the initial Age 2, Fall Session (the earliest session included in the study) was most predictive of later Reading and Math scores. In sum, these results suggest that, on average, preschoolers exposed to READY! significantly outperform preschoolers unexposed to READY! Such conclusions are tempered, however, by the possibility of selfselection effects. Nevertheless, these are positive results for READY! and also for the assumption that early learning programs should target children years—not just months—prior to their entry into Kindergarten.

Paul Strand, Ph.D., Principal Investigator Washington State University Tri-Cities/Thrive by Five Washington SUMMARY “The results of this study are consistent with the idea that READY! exposure is related to improved prereading scores for preschoolers entering Kindergarten” (p10). This conclusion derives from the fact that students of families exposed to READY! had “statistically significant higher scores on a pre-reading letter naming test than did those whose families were not exposed to READY! (average scores were 16.35 and 9.40, respectively) during that same year” (p4). The study utilized data collected over a two-year period in an attempt to overcome the most common confounds, which are cohort effects and self-selection effects. This is the most rigorous examination of the READY! for Kindergarten program (READY!) by implementing a two-year quasi-experimental study in Othello School District in Washington State. The district is well-suited for examining the effectiveness of a reading intervention for children at high risk for school failure because 77% of the students qualify for free or reduced lunch, 81% are of Hispanic descent, and more than 50% of students attend a transitional bilingual program or a migrant program. These results validate READY! as an effective intervention for improving kindergarten reading readiness. The program’s promise is even greater than the results suggest because the intervention is designed to be implemented across multiple years for children between the ages of birth to five, while Strand’s results are for a one-year intervention period only. Strand compared DIBELS Letter Naming Fluency (LNF) and Initial Sound Fluency (ISF) scores, assessed at the beginning of kindergarten, for two groups of Othello preschoolers. Statistical analyses compared the mean LNF and ISF scores of the two groups. Significant differences were observed for LNF scores. The mean LNF score for the active-treatment intervention group (16.56) was higher than for the inert-treatment control group (9.68; F = 5.68, p &lt; .02). Effect size estimation revealed a near-medium effect size for the intervention (η2 = .036). The possibility that cohort effects or selection effects could explain the findings was ruled out based on additional mean comparisons between the two treatment groups and two no-treatment control groups obtained during each year of the two-year study. The differences observed for ISF scores were not significant (F (1,568) = 0.85, ns).

Entire study available at www.readyforkindergarten.org/research. i

DIBELS Letter Naming Fluency and Initial Sounds Fluency tests are nationally standardized and normed tests. DIBELS has been thoroughly researched and each measure demonstrated to be a reliable and valid indicator of early literacy development. http://dibles.uoregon.edu iii

The first group constituted an inert-treatment control group because the families of these children participated in READY! but did not receive the early literacy component of the READY! program. The second group consisted of an active-treatment intervention group exposed to READY! one year later. Unlike the inert-treatment control group, the active-treatment group received a complete intervention, including the fall literacy curriculum, conducted by experienced instructors. iv