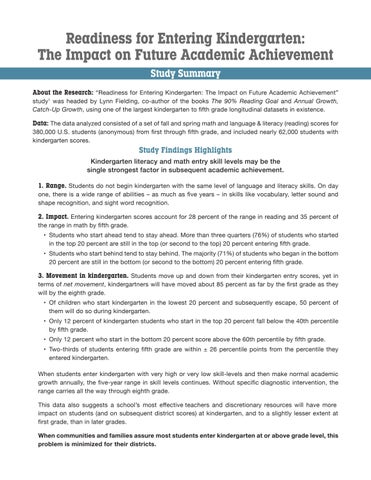 Kindergarten literacy and math entry skill levels may be the single strongest factor in subsequent academic achievement. 1. Range. Students do not begin kindergarten with the same level of language and literacy skills. On day

one, there is a wide range of abilities – as much as five years – in skills like vocabulary, letter sound and shape recognition, and sight word recognition.

3. Movement in kindergarten. Students move up and down from their kindergarten entry scores, yet in

terms of net movement, kindergartners will have moved about 85 percent as far by the first grade as they will by the eighth grade. • Of children who start kindergarten in the lowest 20 percent and subsequently escape, 50 percent of them will do so during kindergarten. • Only 12 percent of kindergarten students who start in the top 20 percent fall below the 40th percentile by fifth grade. • Only 12 percent who start in the bottom 20 percent score above the 60th percentile by fifth grade. • Two-thirds of students entering fifth grade are within ± 26 percentile points from the percentile they entered kindergarten. When students enter kindergarten with very high or very low skill-levels and then make normal academic growth annually, the five-year range in skill levels continues. Without specific diagnostic intervention, the range carries all the way through eighth grade. This data also suggests a school’s most effective teachers and discretionary resources will have more impact on students (and on subsequent district scores) at kindergarten, and to a slightly lesser extent at first grade, than in later grades. When communities and families assure most students enter kindergarten at or above grade level, this problem is minimized for their districts.

4. Summer gain and loss. While individual reading gain or loss varies widely, as a group, students entering kindergarten below the 50th percentile will lose the equivalent of a half a year, while students in the top 20 percent will gain a half a year.

5. The reading/math relationship. Most children (88%) who enter kindergarten reading in the highest 20

7. Correlations. The graph below is formed in four simple steps. First, by sorting the 61,700 kindergarten

The corresponding dot at kindergarten and grade 5 are the average scores of the same 617 students. 617 Students x 100 Dots = 61,700 Students

According to Cohen’s standard, correlations between .10 and .29 are weak; between .30 and .49 are of medium strength and .50 and above are strong.